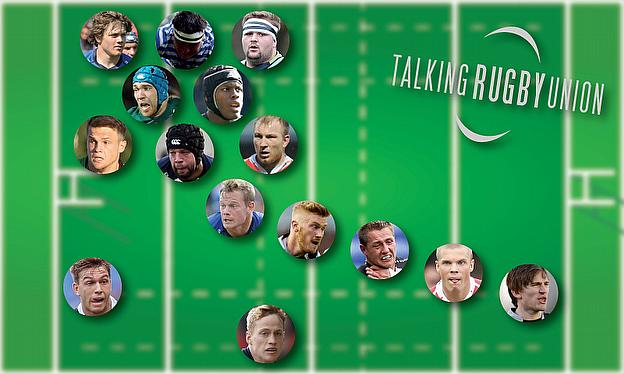 Aviva Premiership XVs of the Season are ten a penny at this time of the year.

This is a XV of the season with a difference. This is the Aviva Premiership Emerging XV of the Season.

No one is going to argue with the likes of Jonathan Joseph, Thomas Waldrom and Nathan Hughes making a select XV, their form has spoken for themselves this season.

This XV attempts to combine the ‘most improved’ players in the competition, with those who were relative unknown quantities, but who have established their credentials as Premiership-calibre players, many of whom have the potential to take that a step further and challenge for further honours in the near future.

Auterac slipped through the cracks at Saracens, but under the tutelage of Neal Hatley, has become a force of nature at loosehead for Bath. The 22-year-old proved to be a more than able deputy for Paul James this season and the Welshman’s imminent departure for the Ospreys will not be overly fretted about at The Rec, with Auterac showing he can be a bona fide starter in the Premiership.

The hooker has enjoyed a fine season and is the only player in this XV to also make TRU’s Premiership XV of the Season. Schalk Brits’ injury this season left some rather large shoes to fill, but they have fit George superbly, and though he didn’t offer quite the same attacking threat with ball in hand, his defensive and set-piece work was beyond reproach.

Plucked from London Scottish in the Greene King IPA Championship, Francis was untested at Premiership level at the beginning of the season, but is now possibly Wales’ best available tighthead ahead of the Rugby World Cup. Francis will likely have a choice to make regarding his international allegiances in the near future, but with England currently enjoying a cornucopia of options at tighthead, don’t be surprised to see him in the red of Wales at the Rugby World Cup.

Kitchener is a well-established player, but has increased his stock dramatically through Leicester’s dogged and resilient campaign. The former Worcester Warrior’s rise to prominence this season has been the silver lining to Ed Slater’s injury for Leicester and were it not for England having a bevy of second row options, Kitchener would surely have an international cap by now.

Itoje has a ceiling as high as anyone in the rugby world, but not even his most ardent supporters could have hoped that he would begin to fulfil his immense potential as quickly as he has done. The versatile lock added dynamism to a Saracens side which has lacked it at times this season and is already beginning to show the dominance at senior level that he demonstrated throughout the age-grades.

A second Junior World Championship-winning captain in as many selections, Clifford has reminded us this season why we were all so excited about him back in 2013 when he lifted England’s first JWC trophy. The back rower spent part of last season with the England Sevens team and went off some people’s radars, but that experience has clearly benefitted him and he was back with a bang in 2014/15.

Like Kitchener, Kvesic is an established and quality Premiership player, but after struggling in his debut season with Gloucester, the openside responded with the best campaign yet in his fledgling career. Admittedly, much of Kvesic’s struggles last year were symptomatic of Gloucester as a whole, but even with the Cherry and Whites still struggling for consistency this season, Kvesic has maintained his high standards, pilfering ball with abandon.

It’s a struggle to think of a forward as under-appreciated as Beaumont this season. The likes of Nathan Hughes, Samu Manoa and Billy Vunipola have all received much-deserved praise, but Beaumont has been regularly performing at similar levels, with little or no national acclaim. The powerful number eight, who also featured regularly at lock, proved to be a perfect foil to the industry of Dan Braid and David Seymour in the Sale back row.

Training and playing alongside Peter Stringer has clearly had a beneficial effect on Cook, who should push the incoming Nikola Matawalu hard for playing time next season. In fact, so impressive has been Cook’s development, that Bath could opt to utilise Matawalu’s dynamic skill set from the bench in the bigger matches, much as Northampton have done with Kahn Fotuali’i.

Wasps’ Alex Lozowski came close to this spot, but Catterick consistently sparked a Falcons back line which has not received enough praise this season. A product of Newcastle’s academy, Catterick follows in the footsteps of a number of vaunted fly-halves, but showed this season that he is more than up for the challenge, displaying an all-round skill set that four or five years ago would have warranted England consideration.

Having lost so many of their home-grown talents to other teams in recent years, it’s a refreshing change to see Irish reaping the rewards of another team’s academy. Lewington learnt his trade with the Leicester Tigers, but it’s with Irish that he has been given the platform to showcase his ability. The winger has made a habit of scoring tries in a back line which doesn’t have quite the same firepower it used to and has even garnered a few calls for international selection.

A dynamic force at inside centre, Hill unfortunately lives somewhat in the shadows of his teammates Henry Slade and Jack Nowell. Nothing should be further from the truth however, as Hill is every bit as important to Exeter’s lethal back line as his two more high profile teammates. When shackled at the gain line and prevented from making his barnstorming runs, Hill can look slightly one-dimensional, but his tremendous potential is there for all to see and he took another big step this season towards an all but certain England cap over the coming years.

At the beginning of the season, Gloucester surely did not have plans to use Purdy as much as they have done this campaign, but after injury once again struck Henry Trinder, Purdy grabbed the opportunities that came his way with both hands. Whether featuring at outside centre or on the wing, Purdy has become the third lethal finisher in a back line already boasting Charlie Sharples and Jonny May.

A full-back by trade, Hammersley moves over to the wing for the purposes of this XV. Hammersley’s teammate Sinoti Sinoti was a strong candidate for this spot, but given his fairly well-known track record, does not quite fit the criteria of this XV as well as the previously unheralded Hammersley. The youngster’s counter-attacking ability has been a nice fillip for Newcastle this season, who have certainly benefited in playing style from their new 4G pitch.

The 20-year-old has been a revelation this season for Sale, not only cementing his place in the team’s first XV, but also displacing an international full-back in Luke McLean. Haley’s scything runs and impressively solid defence has forced McLean into a role on the wing for Sale, as the product of Sale’s academy has filled the Rob Miller-shaped void in the Sharks’ back line with aplomb.