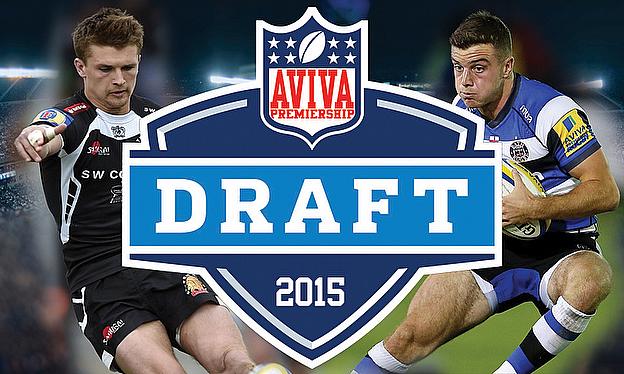 The NFL Draft took place in Chicago last week, as franchises infused their rosters with fresh talent ahead of 2015 NFL season.

This got us wondering just who Aviva Premiership teams would pick if the league were to cancel all contracts and implement a similar system?

For those who don’t follow the NFL or American sports in general, the draft is an annual event where the league’s teams cherry-pick the best talent from the college divisions. Each team has one pick per round, of which there are seven, and the order is decided by performance in the previous year, with the team finishing bottom of the league given the first pick and so forth until the champions pick last.

We have decided to use the same rules for our mock 2015/16 Premiership draft, although with the season yet to conclude, current league position will be used. Bristol will assume the mantle of the promoted team, and therefore first to draft, as they finished top of the Greene King IPA Championship this season. This also conveniently adds Jack Lam to the pool of players available.

Remember, the goal is not necessarily just to pick the best player available (though this has proved quite a successful method in the NFL), but to bolster key positions and/or try to secure players early in positions where there is not a significant amount of depth in the Premiership.

For example, key positions such as fly-half and tighthead prop are both fairly well stocked in the Premiership, but is openside flanker? It could be worthwhile investing early in a Francois Louw or Matt Kvesic and picking up a solid fly-half later.

Slade is one of the most exciting young playmakers in the world and with George Ford and Owen Farrell the current England incumbents, could be available during international periods. Drafting Slade would lock up arguably the most important position on the pitch for the next decade for Bristol.

Newcastle have a good track record with England fly-halves (Rob Andrew, Jonny Wilkinson, Toby Flood) so taking Ford here would make a lot of sense, despite the fact he’s going to be busy during international periods.

Irish have been yearning for a reliable yet dynamic fly-half for years now and Cipriani would give them that immediately. They’ll need to draft a pack to keep him on the front foot, but if they do, he has the ability to make average back lines look great.

As mentioned earlier, the Premiership’s crop of fetching opensides is limited and Louw is by far the best the competition has to offer. The Gloucester sides of old were built on their formidable packs and this pick continues that tradition.

Probably the best tighthead in the world, let alone the Premiership, Quins’ problems up front of late will ensure they look past Cole’s injury worries and draft him early. Cole can anchor Quins’ scrum and allow them to build on a firm foundation.

With the competition’s best tighthead off the board, Sale respond by selecting its best loosehead. Looseheads are generally a little easier to come by than tightheads, but at just 24 years of age and with less injury concerns, Marler could be a better value pick than Cole before him.

Wasps have lacked a consistent, high-calibre performer at fly-half since Alex King left Adams Park and Farrell, a British and Irish Lion, remedies that problem. Farrell doesn’t always garner style points, but he is a winner, something which should go down well with a club building a fan base in a new city.

Exeter’s commitment to nurturing young English talent continues with the selection of Itoje to be their flagship player. The lock has his entire career ahead of him, is well on his way to being considered genuinely world class and gives the Chiefs a captain to build around for years to come.

There are plenty of fine locks in the Premiership and taking one in the first round could be considered wasteful, but Lawes is a dynamic presence on the pitch and gives Leicester one of the premiere defensive players in world rugby.

Young, durable props would have a high value in a draft scenario, making Saracens’ decision to keep Vunipola at Allianz Park an easy one. Having already seen two of their young stars end up elsewhere, keeping one of the pivotal members of the ‘Wolf Pack’ in North London would buoy fans.

North is every bit as good as the players taken before him, but with a pack, half-backs and midfield all prerequisites for getting the ball to a winger, the value of the position drops slightly. That said, North is capable of turning games on their head and is a threat to score from wherever, ensuring he doesn’t fall out of the first round.

They may have lost Lawes, but Northampton pick up his England engine roomer partner to appease the faithful at Franklin’s Gardens. Launchbury won’t make quite the same impact at the set-piece or as a tackler, but he brings improved breakdown work and carrying.

Having picked up a difference-making playmaker already, selecting Kvesic would give Bristol the best opportunity of providing said playmaker with quick, clean ball.

Wade, on the artificial surface of Kingston Park, playing in a back line having its strings pulled by Ford, would be exhilarating to watch for Newcastle fans.

Injuries are a worry with Tuilagi, but the prospect of him latching on to delayed passes at the gain line from Cipriani is enough in itself to make Irish take a risk here.

One world class back rower is good, two must be better. Hughes’ powerful carrying and offloading game would be the perfect complement to Louw’s industry and breakdown work.

Quins have been blessed with Nick Evans for the last seven years, but the draft would give them the perfect opportunity to find a younger model at the position. Wales’ lack of interest in Williams makes him an even more valuable commodity.

He may now be in his thirties, but with the likes of Evans and Charlie Hodgson showing that significant longevity can be had at the position, picking Myler, who is seemingly off England’s radar, could reap big rewards for Sale.

Having picked up their shiny, new fly-half in the first round, Wasps give him a weapon to work with in the back line, drafting local (until recently) lad and fan favourite, Daly.

Exeter secure another player who looks set to get even better over the coming years and add incision to a back line which, although yet to be built, has a great foundation piece in Joseph.

Vunipola joins Lawes in a Leicester pack which already has the look of a unit which could challenge some of the vaunted Welford Road packs of old.

With the premiere fly-halves all but gone, Saracens add a creative force at inside centre by taking Leiua. The Samoan is also a prodigious running threat and would be available during the Six Nations period.

Having just worked out how to turn on their latest toy, the last thing Bath would want to do is let someone else play with it. Between Burgess and North, Bath are set well to be the most powerful pound-for-pound team in the Premiership.

Dan Biggar may have usurped Priestland in the Welsh pecking order, but it wasn’t long ago that Priestland was an international rugby regular and Northampton’s fans are likely to be very appreciative of that fact when he runs out at the Gardens.

Slade sparks the back line, Kvesic controls the contact area and now Wilson anchors the scrum. Not many promoted teams have ever been this lucky.

After salivating over a back line boasting Ford and Wade, Newcastle pick up one of the most improved players this season in young tighthead Thomas.

Having previously agreed to leave Newcastle for Northampton, it’s probably fortunate Brookes was overlooked by the Falcons and ends up with Irish, where he will lay a foundation for Cipriani and Tuilagi.

Having neglected their back line early on, Gloucester add Watson, whose counter-attacking ability makes him a threat regardless of the quality of player that Gloucester selects along the rest of the back line.

Ayerza may be the wrong side of 30, but alongside Cole, he should provide Quins with a scrum that is a match for anyone in the Premiership or Europe. With Williams also drafted in the second round, it completes a trio of former Tigers at The Stoop.

Sale’s scrum was bolstered by Marler and now they do the same for their lineout by selecting Hartley. A solid set-piece would be an effective way of keeping Myler on the front foot and improving his prospective longevity.

Mullan helped turnaround a Wasps pack which had been struggling in the scrum for years, so keeping him at the Ricoh Arena is a smart move for the men from Coventry.

Having taken Joseph in the last round, Exeter need someone to put the ball in his hands and as a result, take a punt on Hanrahan. Hanrahan was unable to win a starting job at Munster, but he fits with Exeter’s philosophy and is certainly talented.

Though it’s thoroughly Leicester-like to build fierce and formidable packs, memories of dull and blunt back lines are fresh in the minds of the Tigers faithful, so they add one of the more exciting English backs about in Eastmond.

The lack of England interest in Simpson up until now increases his value, whilst he also has an X factor which even the likes of Ben Youngs and Danny Care can’t match.

One of the better jackals in Super Rugby before his move to Bristol, it’s not guaranteed that Lam would be a hit in the Premiership, but a transitional phase in the Championship certainly won’t have hurt. Lam is another player who would offer the added advantage of being available during the Six Nations.

There are always picks that make you go ‘oooh’ in drafts, particularly towards the end of rounds, and this is certainly true here. Cowan-Dickie may not have even locked down a starting role with Exeter yet, but his potential is tremendous and Saints may be getting a bargain here if goes on to fulfil that promise.