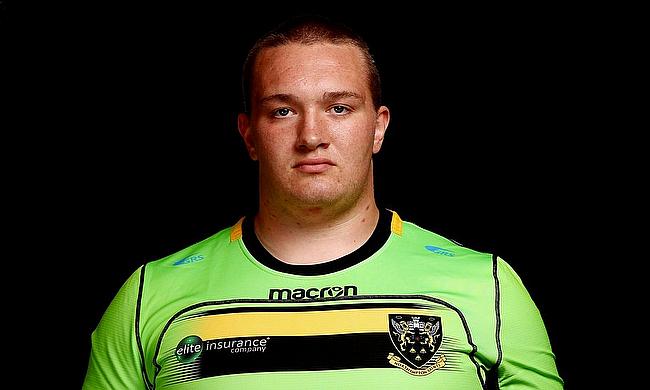 Ehren Painter’s memories of one of his first Premiership appearances will always stand out, mainly because it was on an afternoon where he was part of a Northampton Saints side that finally did the double over their old foes Leicester Tigers.

Saints’ rising star is currently on international duty with England U20s at the World Championships and is recalling his experience of playing at Welford Road. It was April and Northampton had just been thrashed 63-13 by eventual Premiership winners Saracens, but in the East Midlands derby, Painter announced himself on one of the biggest stages. After replacing Paul Hill in the second half, Painter produced a 16-minute cameo in the Saints pack which helped Northampton to a first away win over the Tigers in 11 years.

The scrums that shaped the outcome of Derby Day pic.twitter.com/o5gkVwHtHn

“That was amazing,” he says. “I’m a prop so of course I love scrummaging! Doing it on one of the best stages at Welford Road is fantastic and it was a huge privilege to be a part of that game.”

After such an instant impact, Painter has continued to impress and a whirlwind couple of months could end with success on the international front as England look to regain their World U20 Championship crown in France over the next 10 days. Painter has already lifted silverware with Northampton this term after they won the A-League and it seems like the only way is up for this talented youngest who began his love affair with the sport just seven years ago.

As a boy, he turned out for Chelmsford Rhinos at second row and also represented Felsted School coached by former Wasps prop Andrew Le Chevalier. From there, his rise has been rapid. He was picked up by Northampton at the age of 15 before appearing for England Under-17s and England Under-18s as well as Northampton Wanderers and National One side Cambridge. A first team debut came against Saracens at Franklin's Gardens two months ago and all of these experiences guided Painter to his moment in the spotlight against Leicester.

“I have certainly had some fantastic months and I am just trying to get as much experience as I can wherever that comes. Overall, I could name all the coaches now, but there are so many that have made a huge impact on my rugby and have made it such a fantastic journey! So far, I have been really lucky and hopefully it will continue.”

We talk about his debut against Saracens and it is safe to say Painter would have felt anything but lucky in that fixture as Northampton suffered another chastening defeat, but on an individual note, he admits it was another step in the right direction. “It was still a fantastic experience to play at home in front of a huge crowd and it’s an experience I will never forget.”

At the end of last month, Painter tweeted ‘One game at a time’ and you get the sense that this humble 20-year-old uses that approach himself as he continues to grasp his opportunities. His surprise at his call-up to the England U20s squad highlights this point despite Painter making such an impression with Northampton towards the end of the season.

“It is a huge honour to be honest like with every lad, but for me personally, I didn’t know if I was going to be involved at the beginning of the season,” he says. “The thought of not being involved initially really stung and it’s just been amazing to be part of this team. It has been an incredible experience already and we want it to continue.”

England resume their World U20 Championship campaign this evening against Scotland having already secured their place in the semi-finals following victories over Italy and Argentina in Pool B. Painter is set to start in southern France tonight and after losing to the auld enemy in Six Nations this year, England’s focus is purely on their final group stage match rather than what lies ahead further down the line.

“Like a lot of teams, we take every game as it comes,” Painter says. “We’re not really thinking too far ahead. Yes, we are already in the semi-finals, but we are only looking towards Scotland. Scotland is another fantastic opportunity to play for England. They beat us in the Six Nations and that adds to the drama a little bit, but we are all so excited.”

The England squad to face @Scotlandteam in the #WorldRugbyU20s tomorrow evening.

There is no question that Painter is a determined character, as are all of England’s current U20s squad as they aim to forge a career in the sport and Painter is calm about the challenge ahead for his country. “Every team in the World Cup wants to win. We are really keen and motivated to win, but we will not do that unless we beat every team we play. There are some fantastic teams. Every team we have played so far have been of a really good quality and fantastic tests.”

Whilst Painter’s mind may well be on Scotland and potential glory with England, there will be a moment this summer where he will have time to reflect on a quite remarkable few months in a career which seems to hold so much promise.