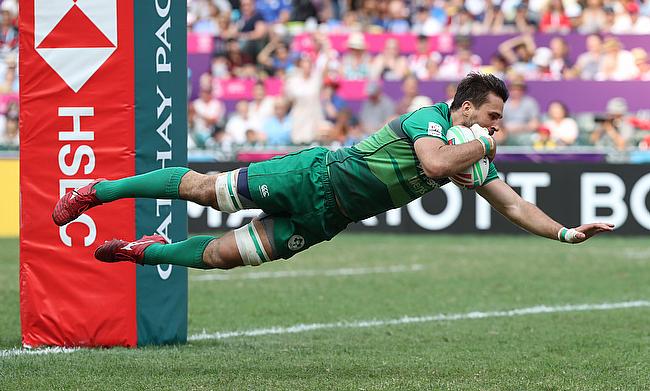 “We were in Colomiers and then he just started packing his bag on the Sunday evening and then just disappeared,” Ireland Sevens player Harry McNulty started.

“When I got home to Dublin, I got a text from a guy out in Limerick going; what’s the craic with O’Shea going on Love Island?”

McNulty is reflecting on when he found Ireland teammate Greg O’Shea was going on Love Island. Just days after Ireland had failed to qualify for the Olympics at the Rugby Europe event in July, O’Shea arrived on the reality show, winning the programme some weeks later.

“Twenty minutes later I got a text with a link to a news article titled; meet Love Islands new guy, or whatever, and a photo of Greg,” McNulty said. “I put it into the group chat (with the other Ireland Sevens players) and everyone was going crazy because nobody knew.

“We organised on the night he was going on the show to have a BBQ at one of the guys houses. There was like 20 of us, we had some food and it was like watching the Champions League final, roaring every time that he came on screen!

They’ve not stopped smiling since they first set eyes on each other... Amber and Greg are your #LoveIsland 2019 winners! ???? pic.twitter.com/3pEd9nbMGc

“He mentioned in the first episode that he has a broken face. He’s got a hole in his head and that’s because he hit his head off my knee. That’s my claim to fame, that I broke Greg O’Shea’s face. That could be the article headline!”

Unable to watch his friend’s victory due to travelling with Royal Caribbean UK after winning an Instagram competition, McNulty had nothing but praise for O’Shea and his continued commitment to playing rugby for Ireland.

“He’s a smart guy. Obviously, he’s got his degree as a lawyer and he knows that rugby is one of the reasons he was picked for the show. If it wasn’t for rugby then he might not have got picked, so he wants to make sure that he keeps doing the thing that got him to where he is now.”

The Irish Sevens side had a year to remember too. Gaining promotion and a full-time place on the World Series, their season was capped off in Colomiers, finishing third in the Olympic qualifiers, sending them to an intercontinental tournament next year. Despite not getting automatic qualification for the Tokyo 2020 games, McNulty says that the Ireland team weren’t as disappointed as people may have originally thought.

“It was always going to be tough,” McNulty said. “You had England there and you have France, who were at home as well. We were disappointed to an extent but knowing there is always that second chance on the other end was always good.

“I noticed it took me a long time to get over winning Hong Kong so much so that you kind of even forgot that the Olympic Qualifiers were even happening because they came around so quickly,” McNulty continued. “By the time we finished Hong Kong, you’re straight into London and Paris.

“It takes a bit of time for it all to sink in and it’s hard to actually step back because it moves so fast especially when we had our time off. I think a lot of boys, myself included, have had a chance to look back, see how well we’ve done and where we’ve come from.

Captivated by the never ending path of the Fushimi Inari shrine ??? . Don’t let these photos fool you - the paths were packed with tourists but with a lot of patience there will be a break and you can enjoy the shrine to yourself for a minute! . . . . #shoreexplorer #thisishowtoholiday #ad . . #kyoto #japan #temple #gopro #sonyalpha #sonya7iii #adventure #travel #lightroom #adobe #shrine #creator #edit #selfie #portrait #aov #heatercentral #travel #travelblogger #travelling #islandlife #lightroom #adobe #wander #dji #drone #sony

“It’s also great to see how many players have come through our system over the years. That’s the one thing I look back at most really. We’ve got guys like Adam Byrne who has gone to Leinster and then Alex Wooten who has gone to Munster. We have guys in pretty much every team in Ireland, so that’s really cool as well, to show that it is a stepping stone for some and a career for others.”

McNulty is one of several players still in the Ireland team that have been associated with the programme since its reintroduction in 2014. Under the guidance of Anthony Eddy, McNulty has seen the programme develop into a fully professional environment, something that the forward is proud of.

“It has been awesome to be here from day one, getting to see it go from one stage to the other,” McNulty said. “At the start, it was just a case of doing weekend camps. You’d still be playing with your club, training and then there would be guys involved with Leinster and Munster. You would just do your stuff and then a schedule that was sent down for a Saturday and Sunday.

“It was two sessions a day, pretty tough on the body. You did that for a few weeks and then you’d play some tournaments. It stayed like that for a while and after a bit you started adding sessions in the evening on a Monday or Tuesday. From there you went during the day and lads were there all the time basically. We’ve just moved into a new facility in Dublin, so now we’ve got our own facility which is great.”

Part of the glamour around sevens is the various locations that teams get to visit, uowever, for McNulty, this is something that comes naturally to him. Born in Bahrain before moving to London and then onto New York, where his brother Sean played Major League Rugby last season, McNulty carries on his passion for travelling, writing a blog and running a successful Instagram page dedicated to travelling.

“For my whole life I have been very fortunate that I have been able to travel around and it is something that I love doing and it works really well with rugby. Being able to go around the world to 10 different places, you don’t get that with any other rugby competitions, so I’m getting the best of both worlds for sure.”