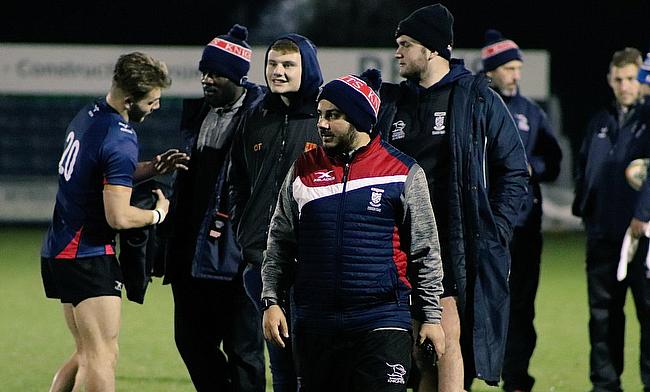 Exclusive: Craig Hampson talks Ealing ahead of the Trailfinders Challenge Cup
Revamped Championship to kick-off in March
Book Review - From Tanqueray to the Championship: The History of Ampthill & District Rugby Club
Sanitisation tunnels at Doncaster Knights could help fans return to stadiums

It is not just the Doncaster Knights players who are straining at the leash to get back into action this weekend.

The backroom staff - including Analyst Burhan Torgut - cannot wait either.

The last competitive match the Knights first XV took part in was a 35-26 loss to Coventry way back on March 14, 2020 in the Greene King IPA Championship.

From the weekend of March 6th this year, they will be in Conference B of the Championship for the shortened 2020/21 campaign alongside Ealing Trailfinders, Coventry, Nottingham, Bedford Blues and Richmond.

For now, all of Doncaster’s energies are focused on their home clash with Ealing on Saturday in the Trailfinders Challenge Cup.

“Obviously the Saracens match was off last weekend in this competition [due to positive Covid-19 cases at Sarries], so that has made everyone even more excited to get involved against Ealing this coming weekend,” Torgut told TRU.

“It has given the guys something to train towards and because we have quite a lot of new players to the club since 2019/20, it will be good to see them in action.”

Something for the weekend...

Torgut has been with the Knights since the summer of 2018 having previously balanced his time working with the University of St Andrews and analyst roles at Edinburgh and Glasgow, respectively.

After two and a half years in Yorkshire, the 30-year-old is now very settled at Castle Park.

“From my time playing in the Worcester Warriors Academy, I knew Clive Griffiths, who was the Director of Rugby at Doncaster in 2018 and had been part of the Wales coaching team during the Grand Slam in 2005, and he gave me an opportunity to join the staff here and I haven’t looked back,” Torgut added.

“To be able to focus on one thing and be surrounded by such a helpful group of staff who made me feel at home here straight away was excellent.

“I began to learn so much in a short space of time and began to realise how such small things and details that go into training, S & C and other things, can have such a big impact on the team.

“For the past two seasons, I have been coaching with the Academy while being the analyst with the first team, so that has definitely kept me busy, but I am certainly not complaining.

“I have always been keen to keep my coaching going alongside the analysis side of things having passed my Level 3 coaching course. At Doncaster, I am lucky to be learning from great coaches in the shape of Head Coach Steve Boden, Forwards Coach Nathan Smith and Backs Coach Joe Ford as well as Academy Head Coach and former player Tyson Lewis.

“It is a bit like starting with a blank sheet of paper.”

In ‘normal’ times, from a Monday morning onwards, analysts are usually burning the midnight oil watching footage of their own team and clips of their next opponents.

Of late, of course, Torgut has not been able to do that, so how has his job differed since last March?

“In some aspects, it has been really good because we have been able to work with individual players and analyse things they have done in previous matches or in more recent training to help them get better,” he explains.

“However, on the other hand, we have not been able to analyse opposition much apart from Ealing’s recent win against Saracens in the Trailfinders Challenge Cup and in some respects, going into this season it is a bit like starting with a blank sheet of paper.

“I must pay credit to the S & C coaches at the club who have worked ever so hard with the players in recent months, keeping them busy with lots of different challenges and getting them very fit so that we can play the style of rugby that we want.

“As an analyst, my job is to support their work and the work of the coaching team and it will just be great to have a game to get our teeth into this Saturday.”

“Playing for Cyprus was amazing. It made my family very proud.”

Before Yorkshire became home in 2018, Torgut’s journey to get there had been an interesting one.

He grew up in Birmingham and he then studied Sports Coaching - majoring in Performance Analysis - at Cardiff Metropolitan University.

“I was then out into the real world and needed to get experience under my belt and David Ross [now working with Nottingham also in the Championship] gave me a chance with the University of St Andrews’ rugby programme,” he states.

“It was brilliant up there and I can’t thank David enough for giving me that chance. Through my work with the Uni and connections I made, I spent time working as an analyst at both Edinburgh Rugby and Glasgow Warriors and that allowed me to dip my toe into a pro-environment before the Doncaster opportunity came about.”

As a player over the years, Burhan turned out for Birmingham Mosely, Worcester Warriors, Dundee HSFP, Bromsgrove and Cardiff Metropolitan University with the highlight undoubtedly being representing the Cyprus international side.

“Playing for Cyprus was amazing, it made my family very proud as my parents were both from there,” the scrum-half who earned 27 full caps said.

“A few years back, one of my coaches suggested to me that I should look into the Cyprus connection that I had and I took it forward and got in touch with those in charge of rugby there.

“They were quite interested and one weekend they came to watch me play in Worcester and things went from there.

“Other players in the national team when I was involved like Andrew Binikos, Marko Mlandenovic and Fidias Efthymiou also spent some time playing in Scotland and heading off to represent Cyprus on a regular basis was just an amazing feeling for me.”