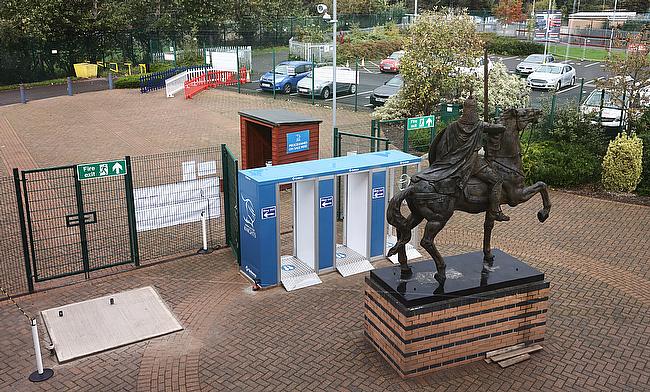 Talks remain ongoing around the restart of the National Leagues
Exclusive: George Oram – ‘Teams are surviving on their bones’
Exclusive: Edward Griffiths - The Championship can be the ‘guardians of the English game’
RFU confirms final league positions for professional and community game

Doncaster Knights have recently introduced an additional safety measure at Castle Park which could pave the way for supporters to return to rugby stadiums.

The Yorkshire outfit are the first Championship club to install the new Gateway Personal Protection Sanitisation Tunnel which acts as an extra line of defence for their players and staff against COVID-19 transmission.

When Doncaster employees and players pass through the tunnel, which is designed and manufactured in the UK, the Gateway sprays them with a ‘non-toxic, effective and safe solution’ which can disable the spread of COVID-19 and any other viruses which might be on a person’s exposed skin and clothes.

It also includes an automated temperature check before anyone can walk into the stadium to ensure no-one is risking the health of others when attending the ground.

If someone does register a high temperature, they are unable to enter the venue and clubs can instantly identify that person through the camera installed inside the Gateway.

All users will be encouraged to walk through the tunnel which sprays a sanitising solution, disabling covid-19 & other viruseshttps://t.co/SnfZnUETQs pic.twitter.com/m5xXm0SwEh

“What you have is quite straight forward,” Christian Pearce, commercial director of Gateway PPT, tells TRU. “You walk into the stadium, you see our Gateways and your temperature is read at the front of the Gateway.

“If you have got the virus or you have symptoms, you are most likely going to have a temperature so you would be told to go home.

“If you have taken your temperature and it is fine, a green light comes on, you walk into the Gateway and you’re sprayed from head-to-toe with a very fine mist of sanitiser which is safe. It’s efficacy of killing the virus is 99.99% so anything on you is immediately zapped.

“You are in there for three and a half seconds and before you know it, you are into the stadium. You then have the sense of security that if there was anything on your skin or clothes or on anyone else's, it's been eradicated."

At Doncaster, they have a triple Gateway system in operation and rather than the company immediately tapping into the sporting industry themselves, it was in fact the Knights who first expressed an interest in the tunnels.

“I was thinking about the sanitisation tunnels and we just found Gateway on Facebook!” Neil Holmes, General Manager at Doncaster Knights tells TRU.

“I sent an online enquiry to them and they were very efficient. I have been really happy with the service throughout and the system is working very well.

“I have had a couple of venues ring me, enquiring about it so we are moving forward. Nobody can stop Covid, but the main priority is to ensure the safety of our players, all our teams, our staff and all of our visitors to Castle Park. We can reassure them with the systems we have in place, and everyone must use the system on entrance to get into the ground.

Just heard there will be a socially distanced concert in the O2 in a couple of weeks.

Meanwhile there will be 300 or so at the OUTDOOR venue Twickenham on Saturday for the @ExeterChiefs v @WaspsRugby @premrugby final.

"The hope is that the sanitisation tunnels will play a major part in getting fans safely back into the stadium to support the Knights in person when restrictions are eased and in line with government advice. With the feedback we have received so far, I would recommend Gateway 100 per cent to any other club”.

Gateway PPT’s tunnels are already deployed in other parts of the country including London’s two Piano Works music venues and they are also in use at West Ham United’s training ground.

The hope for Pearce and his team is that the sanitisation tunnels will play a major part in gradually bringing fans back into stadiums, but initially, Gateway PPT’s first port of call was installing their product at care homes.

“To begin with, we actually brought the Gateway’s on to the market for care homes,” Pearce, who is also a passionate rugby supporter, says.

“The Doncaster Knights then picked up on it pretty quickly. They beat the football world to the punch! We are at West Ham’s training ground, but rugby has now taken a step forward with this which is good to see.”

What is also ‘good to see’ from Gateway PPT’s perspective is the support their sanitisation tunnels received in a recent YouGov survey which was commissioned by the company.

It revealed that over half of the people who took part in the survey would like to see additional sanitisation measures put in place, with 60 per cent saying they would be happy to walk through a tunnel to watch their favourite sports team.

“It is very positive,” Pearce adds. “We are also now at construction sites. We are setting up in theatres. We are talking to other clubs as well. People want to know that they are safe and free from the virus on their skin and clothes and they want to know that everybody else in the space with them is as well.

“We have had people who have questioned it, though. They have come to the front of the Gateway and they don’t want to walk through it, but once we have explained exactly what the sanitiser is and what it does, then they are confident and they go through.”

Whilst it is clear Doncaster are very satisfised with their sanitisation tunnels and the messages and statistics coming out of Gateway PPT are promising, the cost to install the product at stadiums will be key for many clubs.

With English rugby in a dire financial situation due to the impact of the pandemic, the game continues to lose revenue.

For one sanitisation unit, the pricing would start from £7,985 and installation costs are £450 per day depending on the quantity purchased. To cope with the capacity of a large stadium, the Gateway team would work out the numbers of tunnels required to get fans through as quickly and safely as possible.

Pearce was also keen to stress that payments could be spread across a three to five-year period and Holmes feels the system could be worth every penny in the long-term.

“Any club or anyone that wants to come down and visit Castle Park to see how they work, come and have a go. They won’t be disappointed. I know it costs money, but at the end of the day, we are monitoring everyone who passes through our Gateway system.

“Without it, if we were to have players and staff who did have a high temperature, we can react on it straight away without causing any further implications within the ground."

Widespread implementation of the tunnels would likely need government approval, but Gateway PPT are hopeful they have a concrete safety protocol in operation which could help with the return of supporters to sporting venues.

Combined with the horrendous weather conditions throughout Saturday’s Gallagher Premiership final, there was a ghostly and eerie feel around an empty Twickenham due to the absence of fans.

With a large source of the RFU’s income coming from spectators attending England HQ, Pearce and Holmes are keen for the sanitisation tunnels to be installed right across the game.

Holmes: “I hope Gateway do get 100 per cent back up from the government. Government themselves have got a very difficult task on their hands at the moment and I wouldn’t like to be in their shoes.

“I can see Gateway being used across the country, but it is when which is the big question. We just don’t know and that is not just in rugby, but in every club and in every sport. With the crowds, I want them back tomorrow but it is not that easy. We always move one step forward and step some places back.”

Pearce added: “It would be exciting to see our Gateway’s at Twickenham! I grew up at Twickenham. The home of rugby is a fantastic arena with fantastic facilities.

“I hope it is only a matter of time before Twickenham get in touch with us. We can have our Gateway’s positioned at each of the gates and it is just going to be a normal thing. People aren’t going to even think about it.

“Clubs and businesses will then be able to show to government that they are taking the initiative to make stadia safe, and that they should be allowed to re-open as soon as possible.

“They will be taking temperature checks using the Gateway and we are sanitising people from head-to-toe who may have got off tubes or buses. We are ready to help these clubs and by doing so, also support the local businesses surrounding the stadia who rely on clubs getting back to normal."