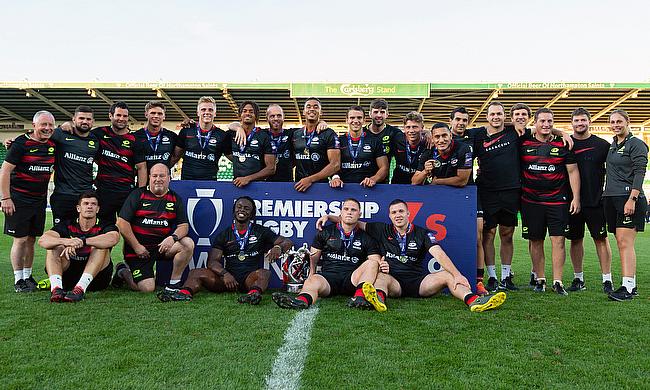 Saracens have successfully defended the Premiership Rugby 7s as they defeated Wasps 35-19 in the final at Franklin's Gardens.

The two teams met in the final for the second consecutive year with Andrew Christie’s double setting the tone for the Allianz Park outfit.

Will Porter and Jacob Umaga had both crossed for Wasps as they came out the blocks intent on avenging their 2018 Final defeat, with Umaga adding one conversion.

But it was not long before Saracens hit back and tries from Ali Crossdale, Tom Whiteley and Andrew Christie ensured the defending champions took a 21-12 lead into the break.

Christie added his second of the game soon after the restart to increase Saracens’ advantage, before Callum Sirker closed the gap for Wasps with a solo effort from his own half.

Saracens would not be denied, however, and Sean Reffell punctured a hole in the Wasps’ defence before sending Charlie Watson over the whitewash to seal another 7s title.

Earlier Saracens defeated London Irish 24-14 in the quarter-final and blanked Exeter Chiefs 31-0 in the semi-final to reach the final for the fourth consecutive time since the tournament inception in 2010. Meanwhile, Wasps edged out Leicester Tigers 26-20 and later trounced Bristol 54-12 to lock horns with Saracens.

Meanwhile, Gloucester went on to win Premiership Rugby 7s Plate as they defeated Sale Sharks 34-29 in the Plate final. The Cherry and Whites trailed Sale Sharks 29-17 with four minutes left but tries from Reece Dunn, Tom Stanton and Varney saw the reigning Plate Champions pull off an unlikely comeback to win 34-29.

Scotland's Craig Jackson has had a summer to remember

Joel Conlon determined to show his qualities at Saracens