The powerful forward looks for the hand-off 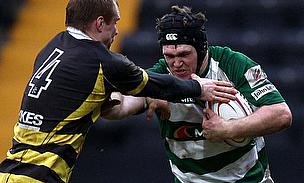 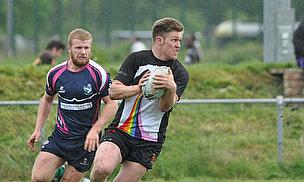 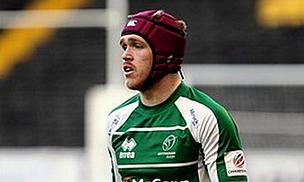 With over 100 caps to his name for Nottingham Rugby Club in the RFU Championship – one of the toughest leagues out – Alex Shaw is an experienced campaigner in England’s second tier but the back rower has decided to move onto pastures new ahead of 2014/15 season.

After coming through the ranks at Leicester Tigers as a junior, followed by a spell with Sale Sharks, the 26-year-old moved to Nottingham in search of more rugby.

However, four years later Alex has decided to embark on a new venture and join the recently promoted Doncaster Knights who fought their way back into the Championship after an impressive season in National 1 last year.

Although last season was a disappointing and ‘rebuilding’ year for Nottingham, Alex enjoyed a fantastic season the year previously as he was a central part of the fantastic Green & White side that finished the season second in the Championship.

Talking Rugby Union’s Austin Halewood spoke to Alex ahead of his new season with Doncaster to chat about his thoughts on his new club, his Championship career so far and his ambitions for his inaugural season in Yorkshire.

“Yeah, the pre-season is well underway in Doncaster now, we are into week four, and I can’t wait to get started,” Alex began. “I’d been at Nottingham for four years, really enjoyed my time there, and managed to stay pretty injury free in over 100 games for the club and I just wanted a new challenge, really.

“It’s for my own individual progression, to move place and then have new coaches, different setups and Doncaster gave me that option and I thought it was a good match.

“The Head Coach and the facilities that they have at Doncaster were some of the main things in my decision. Maybe not this year but in terms of progressing forwards in the next few years I think they’ve got a great potential to keep going up and keep progressing.

“I think they’ve got those foundations set and it’s going to be great to be a part of that setup and that team.”

Having been newly promoted back into the Championship after a fantastic season last year, Alex admitted that the changing room is still a great place to be with the team taking a lot of confidence into the new season.

“However, for every team in the last five years or so since it has been a 12 team structure it has been really difficult for the team that gets promoted, but Doncaster have been there before and they’re clearly aware of what it takes to stay up.”

Before this season, as aforementioned, Alex had enjoyed a fruitful spell at Nottingham for four years, with over 100 caps to his name and the 26-year-old admitted that the club was a difficult place to leave.

“Yeah, it was,” Alex admitted, “I’ve left some very good friends there, the Head Coach Martin Haag is definitely one of the best I have ever the pleasure of working with. He’s very much one of the biggest assets of the club and I think that any team under his leadership is always going to do well.

“Last year it wasn’t the greatest season, but it was really a rebuilding year. As I say, it is sad to leave and I’m already looking forward to going back – I’ve got both games against them marked down already!”

Nottingham ended the season in a disappointing tenth, ahead of just Jersey and then Ealing Trailfinders, who were relegated to National 1.

However, moving ahead Alex is now well into his pre-season with Doncaster and feels like he is fitting into the team well already.

“One of the main reasons I decided to come here to Doncaster was because of some good friends I’ve played with in the past who are already here and they both spoke very highly about the club.

“I think the whole idea of any team who goes through the season and wins the league brings everyone closer together and you can tell that when you’re inside the changing room and when you’re working on the pitch or in the gym.

“They’re very high spirited, it’s a good place to be around and there’s a good buzz still on the back of the success of last year.

“I think that is going to be one of our most important attributes leading into this next season.”

Although we are still enjoying a British summer, Doncaster are now three or four weeks into training and although Alex is enjoying getting back on the pitch, it’s real hard work.

“It’s going good,” Alex began, “we’re working hard with three or four sessions a day. In terms of rugby we are very much still at the early stages but our strength and conditioning – it’s hard with lots going on.

“On a personal note, though, the weather has been really nice. Training in the sunshine is always a real bonus.

“We’ve had a few hard training sessions down by the Keepmoat Stadium, where the rugby league side play, and we’ve been doing some horrible hill sessions there which haven’t been fun but they’re always doing some good deep down.”

To conclude we asked Alex about his ambitions for this season with his new club and what he would ideally like to achieve at Doncaster.

“It’s not really about short-term goals for me,” Alex explained, “as a team we’ve got a few pre-season games that clearly I want to be in good shape for and be a part of the team.

“When the league starts I definitely want to earn my place and make sure that I keep the performances up and hopefully try and keep it for the rest of the season.

“It’s going to be a long year but I’d much rather be starting and doing my bit for the team than not.”