Ted Stagg - 'Doing what I Love' 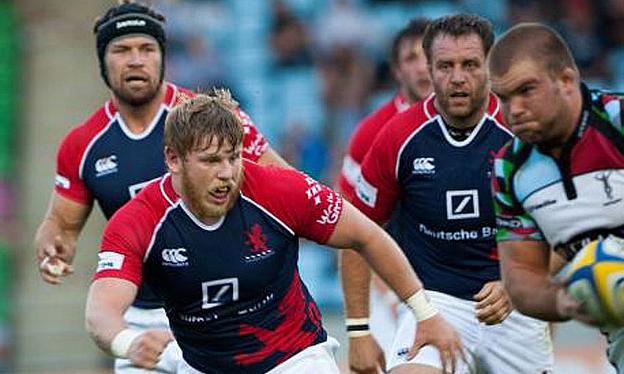 For the former Bath University student Ted Stagg the RFU Championship has been fruitful ground over the last few years.

The young hooker has moved from strength to strength from his days in university colours to being selected in a RFU Championship XV to take on a touring New Zealand Maori side back in 2012.

The 24-year-old has amassed an incredible number of caps in the second tier of English rugby already with spells at Rotherham Titans and London Scottish last season before the West Country boy decided to move homewards to play for Plymouth Albion this coming season.

Ted was unlucky last season with the Exiles due to a combination of injuries and tough opposition for the number two shirt. A medial ligament injury ruled him out of action from mid-December for eight weeks until he made his comeback against Leeds Carnegie in March.

Although Ted endured a less than ideal season by his standards in the Championship last year Talking Rugby Union have highlighted the front rower as one to watch out for in the future.

Ted spoke to TRU’s Austin Halewood about his ambitions for his new season with Plymouth Albion and how he was finding the club now that pre-season is well underway.

“Yeah, it’s going really good,” Ted began, “It’s not been like any pre-season I have ever done before at the moment. There wasn’t that first week to ease yourself back into it with the normal fitness tests and stuff it was straight in from the first day which I have actually quite liked.

“We are about four weeks into pre-season now and, yeah, we are looking to bring in a lot more rugby now. Our first block was mainly focussed around a lot of fitness, so we would do our weights in the morning with some individual skills and unit work, then in the afternoons we would look to work on our basic patterns with a bit more fitness.”

For any player moving from one club to another is always challenging in more ways than one, with getting used to a whole new team and then a different style of play; however, Ted is confident that he is fitting in well at Plymouth and believes he can have a big future at the club.

“Yeah, any time you move club it can always be a bit nervy, so the first couple of days were really about just getting to know everyone but the core squad they have retained from last year have done a great job of helping everyone to get to know each other from the start.

“When I was at Rotherham there was a good ethos of not only having good rugby players but having good people and with Plymouth things are exactly the same here.

“All the players get on really well and the club are very big on getting everyone together during the week, doing activities so we all get to know each other.

“It’s a very exciting time for the club too, though, it’s right in the middle of Plymouth and the club is really trying to get all of the city behind them more than ever this year – I’m really pleased with the move.”

After spending a year with London Scottish Ted did not get quite the recognition he deserved, alongside his injury woes and therefore decided a move west was the right way to go.

“Well, I’m a West Country boy born and bred and when the opportunity came up to move back there it was really attractive by itself.

“I wasn’t getting perhaps as much game time as I was hoping at Scottish and it was just one of those things really, the opportunity came up for me to move and potentially play a bit more rugby in an area of the country that’s like a second home to me really.”

At the age of 24 with tenures at both London Scottish and then Rotherham Titans before that the young hooker has already gained a vast amount of experience in the notoriously tough RFU Championship.

“Yeah, this is my fourth season now so I’m pretty comfortable at that level, of course,” Ted admitted. “Again I’m just really looking forward to the challenge of it and being able to put my mark on the league and my new club.”

Ted’s success in the league was highlighted when he was selected in a RFU Championship XV who took on a touring New Zealand Maori side – a fantastic achievement and testament to his skill as a player.

“It was a fantastic occasion,” Ted recalled, “and it’s definitely up there with some of the best points of my career so far.

“It was massive for me personally. As soon as I heard that there was going to be XV selected from the league to play against the Maori, as with everyone else, I had that as a real ambition to be involved in it and play against some of the best players in the world.

“It was a slightly surreal but incredible experience, really. I didn’t play for too long but I just remember that the pace they played at was phenomenal. Every time they went into contact they were able to offload before it and in parts they seemed as if they were just too good to compete with.”

Finally, when asking Ted about his career highlights so far he again mentioned the Championship XV game but added that “just being able to do what I love and have rugby as a job, it’s something I always dreamed about as a kid and said to my parents all I want to do is be a professional rugby player.

“I never wanted to do anything else, so just being able to do this on a daily basis is incredible. I still have to sit down sometimes and think to myself – this is pretty good!”