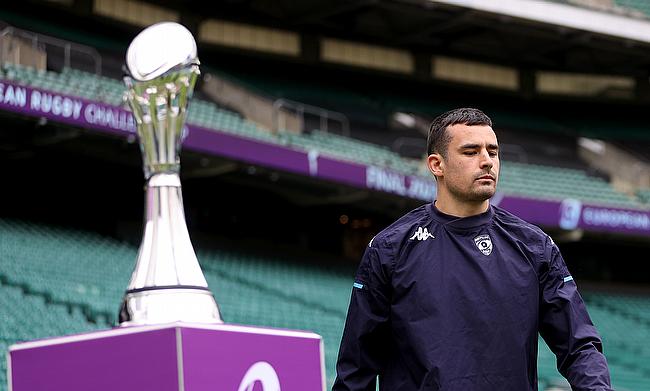 Will Skelton: 'We are not just playing out there for us - We are playing for our fans, families and friends'
Can the Tigers win silverware in London just like the Foxes? - “That's the plan!”
Callum Sheedy Exclusive: These guys are operating at a world class level - You have to pinch yourself!
Zach Mercer named Gallagher Premiership Rugby Player of the Month

What is there to say about Alex Lozowski that hasn’t already been said in his professional career?

Having begun his journey in the Championship with Yorkshire Carnegie (now Leeds Tykes), Lozowski has since followed in the footsteps of his father, Rob, in playing for Wasps for two seasons and then moving to Saracens.

It is at Sarries where the 27-year-old has thrived the most, as up to the point of joining Mark McCall’s dynasty, the versatile back had always been thought of as a ‘good player’, but never a great one.

After his first season in North London, Lozowski was called up to Eddie Jones’ England squad to tour Argentina. With a large contingent of the country's key players away with the British and Irish Lions in New Zealand, this was an opportunity to impress against the Pumas.

Starting the first Test at inside centre, just a week later, Lozowski was replaced by Piers Francis in the No.12 shirt and the Northampton Saint fully grasped his chance as he became a part of Jones’ plans for the 2019 Rugby World Cup.

The last time Lozowski represented his country was against Japan in 2018 and part of the problem for the talented individual has been finding his best positions on the field.

In Leeds, he was deployed as a creative full-back, then at Wasps, he split his time between fly-half and centre, with Jimmy Gopperth’s presence and the impending arrival of Danny Cipriani providing the catalyst for a move to Saracens.

There we have seen Lozowski thrive as he has kept established internationals out of the starting side but still there was no call from Jones or England, so when the opportunity came to essentially take a gap year in France whilst Saracens were in the Championship, he took it.

Describing Montpellier’s season up to this point as a ‘rollercoaster’, Lozowski perhaps wasn’t expecting the 12 months he has had. For much of the 2020/21 campaign, the French club have been in a dog fight at the foot of the Top 14 table and have only recently been able to avoid the clutches of a potential face-off with a ProD2 side.

Having been in France for nearly a year and playing regularly at fly-half due to Handre Pollard’s absence through injury, Lozowski has impressed during his time in southern France and he is now looking forward to a return to England this weekend.

Despite a tough domestic campaign, Montepellier will be targeting their first piece of silverware for five years when they take on Leicester Tigers in Friday night's Challenge Cup final at Twickenham and Lozowski is expecting a physical affair.

“Having played in the Top 14 for a year now, having played in England before and having watched quite a lot of the Premiership on TV, I would say that the physicality of the ball carrying in France is way, way higher,” Lozowski said.

“You look at teams in the Premiership this year, there is nowhere near as many what you’d call ‘properly physical ball carriers’ compared to France where every weekend you go into a game thinking, 'blimey, I am going to have to tackle today’.

?? “The RFU and EPCR teams have been working extremely hard since it was announced Twickenham Stadium would host these matches to get everything ready for the return of fans"

The home of English rugby is all set to host the #ChallengeCupRugby final ??https://t.co/VN3wYGMLfy

“Having said that, I think a few exceptions to the rule would be the Leicester players. Looking ahead to this weekend, guys like Nemani Nadolo, Ellis Genge, Jasper Wiese, you’d have them down as ‘properly physical ball carriers’ in the Premiership and you look at those guys and think, ‘I am going to have to tackle tonight’.”

Going on to cite the likes of Ma’a Nonu, Levani Botia and Pita Ahki as just three of the hard-carrying backline players he has had to contend with this season in domestic competition, it is clear to see where the fly-half is coming from.

Rather unlike Ben Earl and Max Malins, who also went out on loan for this season to Bristol Bears, Lozowski has been adrift from much of the goings-on at Saracens these past months. That, as well as time spent away from the Premiership in a completely new environment is just the sort of refreshment that Bath's Zach Mercer will be looking for when he moves to Montpellier in the summer.

It is the same as what Joe Marchant hoped to achieve by heading to Auckland to play for the Blues in Super Rugby, soaking up knowledge from the southern hemisphere to enhance his game in order to come back a better player for both Harlequins and England when called upon.

But, whilst Lozowski says he still has the ambition to play for his country, he also admits he has stopped worrying about it too much and is instead focusing on the given task at hand.

After the conclusion of his time in France, he will be taking his learnings back to Woollams to use the wisdom of World Cup winners Handre Pollard and Cobus Reinach to add an extra dimension to his own game and that of Saracens.

“Another thing that has been an eye-opening experience is just having conversations with blokes like Handre Pollard and Cobus Reinach and Jan Serfontain, Paul Willemse, but especially guys like Polly and Cobus,” Lozowski said.

“But then just having spent time with these guys and tried to understand the way they see things actually has been extremely useful and there will definitely be a few things that I will come back with and speak about when I get back to the club with Sarries and just maybe bounce a few ideas around because there is some really interesting stuff that we have talked about.”

It has been a difficult season on the pitch for Montpellier, but also off it. With national lockdowns, there hasn’t been too much for Lozowski or his new teammates to do away from the field, but whilst that has been the reality for rugby players, they have still been able to travel, do their jobs and have a sense of normality which is something that isn't lost on the 27-year-old.

“Seeing fans back in stadiums this weekend [Twickenham will host 10,000 on Friday], it makes you think about what each individual has been through over the last year or so,” Lozowski said. “Everyone has different stories, different challenges they have had to overcome all across Europe, all across the world, but I am talking about rugby fans.

“I think for us definitely, we want to give back to our fans who haven’t been able to come to games but have been supporting us from afar, who come and wave us off for every game as we get on the bus.

“I just think seeing those people back in stadiums now, outside stadiums and thinking about maybe what they have had to go through in the last year, everyone’s individual challenges, it does mean a lot to try to give back to them.”