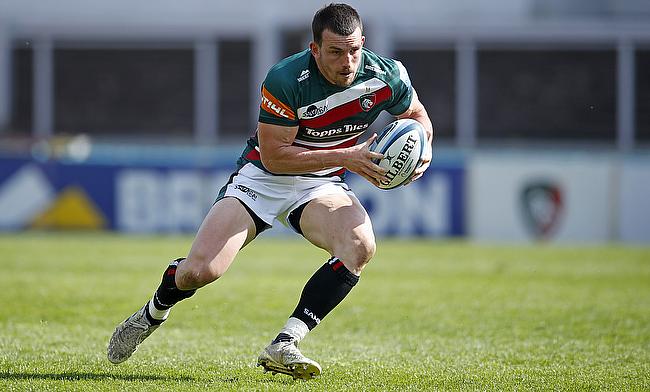 The Foxes defeated the star-studded London outfit 1-0 thanks to a cracking goal from Youri Tielemans to lift the trophy for the first time in their history at Wembley Stadium.

Now it is the Tigers who are gearing up to play a big game in the English capital when they take on French giants Montpellier on Friday night at Twickenham in front of up to 10,000 fans in the European Rugby Challenge Cup final.

So, can Steve Borthwick’s charges bring back the second piece of sporting silverware to the East Midlands in a week?

“That's the plan, that would be ideal,” 30-year-old centre Scott told TRU.

“I got home and watched the end of the FA Cup final last weekend and it was brilliant. I was really chuffed for them. It was the first time they had won the FA Cup and amongst the players and staff at the Tigers, there are a few diehard football fans, so I was really pleased for those guys and the area as a whole.

“We will have to be at our best, though because Montpellier are a top side. They are a big budget ‘rock star’ French team with lots of household names. They are in the classic French mould with lots of big men. They are not too subtle in the way they play, but they have a full international backline so there are threats all over the park.

“These are the teams you want to play against because you want to challenge yourself against the best.”

Trophy can keep the Borthwick revolution rolling: “There is more to come from us”

Scott was injured when Edinburgh Rugby lost the 2014/15 Challenge Cup final to Gloucester at the Twickenham Stoop and after going on to join the Cherry and Whites, he tasted defeat again against Stade Francais in 2016/17.

The following season, he was not in the 23-man squad when they went down 31-30 to Cardiff Blues in Bilbao.

As a result, he will be looking to make it fourth time lucky in Challenge Cup finals and a trophy would be a great way to show that the Borthwick revolution at the Tigers is working.

“I came in at the same time as Steve last summer and there was a lot of turnover of players and staff so it felt like a new beginning,” Scott explains.

“There have been some tough moments and Steve was rotating the team a lot at the start to work out where everyone was at. We weren't as competitive in those early days, but I think our growth has been really rapid especially over the last two or three months.

“We are winning more games and playing better. There is more to come from us, but to get to a European final in our first season of Steve's project is fantastic.

“I think 41 guys have got us to this point in the competition whereas in the Champions Cup, that number would probably be under 30.

“We've had guys making the first team debuts in this competition and I've been involved with clubs before that have made runs to the Challenge Cup final and it is a great competition.

“On Friday, it will be interesting to see how everyone adapts to crowds again. I think you'll see a lot more emotion. We've all forgotten how much we feed off the energy of the fans, but watching the Gloucester versus Bristol match on TV on Monday night, you could really see guys getting fired up. The crowd really do play a part.”

With wife Ruth expecting a baby at the time, they were keen to stay in the Scottish capital, but it seems that Edinburgh could not find the budget to keep him.

Most Scottish rugby fans struggled to understand that decision, but Edinburgh’s loss has been Leicester’s gain and he has become a key part of their midfield.

Son, Remy, arrived a few months ago and Scott, who has set up home with the family just outside the city of Leicester, said: “We’re really settled in now. It just took a bit longer than it normally would because we weren't able to socialise with other families or other players outside the training ground. It was just come in, train, stay away from each other and go home during the various lockdowns and such like.

“There were points during the long dark winter months when it was quite tough, but we’re now looking forward to the weather returning and restaurants and bars opening and having a bit of normality.

“It means we can take the little man and meet other people and get back to normal life again.”

Hopes of a Scotland recall: “I would love it”

Scott earned 39 caps for Scotland fairly early on in his career and played at the 2015 Rugby World Cup, but he has not featured for the national team since the summer of 2017.

With Chris Harris set to be away with the British & Irish Lions this summer and Huw Jones still recovering from injury, there may well be a chance for a Scotland recall for Scott ahead of Tests in July with Romania and Georgia.

“I hadn’t really heard much [from the Scotland coaching team] for a while, but I got a couple of texts over the last few weeks just checking in and seeing how I am,” he reveals.

“Genuinely, it [playing Test rugby] hasn’t really been on my mind because I haven’t had any contact with them so I have just been trying to play as much as I can down here.

“It is tough because we have good centres down here and I have been fighting for my place with the club, so I feel like I have had a load on my plate and Scotland has been the last thing on my mind.

“If a chance was to come with Scotland in the summer, of course I would love it. It would almost feel like getting a first cap again. I’d jump at the chance, but as I say, I have no idea if I am in that conversation at all.”

Leicester Tigers take on Montpellier in the European Rugby Challenge Cup final on Friday at 8pm at Twickenham. The game is live on BT Sport.