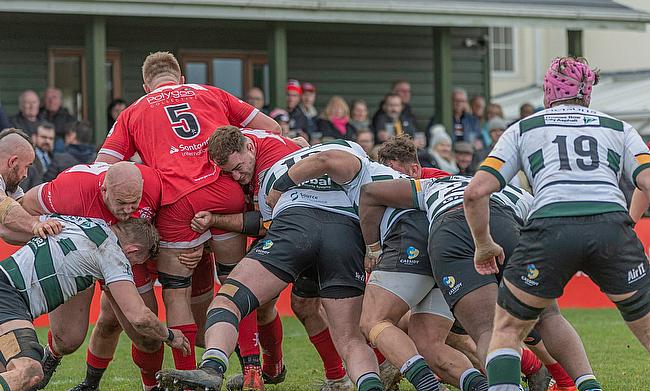 Most Scottish rugby supporters were glued to the television or were lucky enough to be in Rome watching Gregor Townsend's side face Italy in the Six Nations last Saturday, so one Scot replacing another on the pitch in Jersey may not have captured the minds of the majority.

However, when former Scotland Club XV prop Stevie Longwell left the field for Jersey Reds in the Championship match versus Nottingham and was replaced by ex-Scotland under-20 cap Adam Nicol, it was a big moment for the latter.

The 24-year-old tighthead had been out of action since April 10, 2021, when he suffered a hamstring injury in his first-ever game for Jersey away to Doncaster Knights.

Just a few days before, he had relocated to the island from Glasgow Warriors for an initial loan spell which was then to turn into a permanent deal that summer.

The initial injury would not put him out for 11 months, but a couple of setbacks along the way on the same left leg meant that, unfortunately, he was in it - or out of it - for the long haul.

Having moved to a new place far away from his family home in Dunfermline in Fife and with the pandemic still ongoing, it certainly was not an easy spell for Nicol, but he has coped admirably and is now in a good frame of mind.

?? Couple of hit outs for me this week ahead of the festive fixtures.

I spoke to @jerseyrfc’s Steven Longwell and @gloucesterrugby’s Freddie Clarke.

Please enjoy ahead of the games today.

“It has been a tough old time and it feels so good to be back on the pitch now,” he told TRU this week after he entered the fray against Nottingham in the 51st minute of the 48-12 home triumph at the Stade Santander International last weekend.

“Although it has been a long time out, I was not really nervous getting back into the action on Saturday because the club’s medical and S & C staff have been amazing with me and I knew that I was ready to play competitive minutes.

“It was more excitement than nerves and it was brilliant to come on at home for the first time and join a team on the pitch that were playing some great stuff.

“It was also nice to celebrate with the guys at the end because since I moved to Jersey. the playing squad have become like my extended family. There have been some down times in the last 11 months, but they along with everyone else at the club have helped me get past this hurdle in my career.

“I am still just 24 and I want to really kick on, firstly over the next couple of months because we have one big Championship game to come away at Coventry this coming Saturday and, after a friendly with the Ayrshire Bulls, some important Championship Cup matches.

“Now I just want to build up my game time and repay the time and effort Jersey have put into me.”

Three hamstring tears and two times under the surgeon’s knife

Let’s take ourselves back to 11 months ago at Castle Park in Doncaster when Nicol was first injured.

“I tore my hamstring in the game and I then went to London for a scan,” the front-rower who was 23 at the time explains.

“It really was the worst possible start to life at a new club, but injuries happen in rugby and the consultant said I needed to get surgery on it.

“The surgery came and went and, because that was still a loan at the time, after a discussion between Jersey and Glasgow it was decided I’d stay on the island for my rehab. Things were going fine and then 10 weeks into my rehab I re-tore the hamstring again.”

That setback happened in the gym just while he was doing a routine strength exercise, so another trip to London came for Nicol - in fact two trips in the next month - and the surgeon he met with said that things were healing really nicely and no surgery was required.

“I just cracked on with my rehab after that positive news and weeks and weeks went by before I was edging close to playing in the first game of the 2021/22 season when I re-tore the same hamstring for a third time in a running session,” he said.

“Having been so close to getting back that was really tough to take at first and I needed surgery again. However, once again I just got my head around it quickly and the folk at Jersey - and my parents and friends from afar - rallied round me. I just set new goals with the medical staff here and went from there.”

Fast forward almost an entire campaign and Nicol is now back and bouncing around training like a winger such is his keenness to make up for so much lost time at a club who are fourth in England’s second tier.

“You can’t afford to look back in rugby or in life, what has happened has happened and it has made me a stronger person mentally while Jersey is such a nice and peaceful place to rehab that the calm around here really helped me at times,” Nicol added.

Travels of a tighthead: Aberdeen to Jersey via Bermuda and a number of other places…

Nicol’s family are originally from the north of Scotland and he was born in Aberdeen before his family moved to Bermuda when he was six months old.

“That was a pretty cool place to grow up and it was there that I took up rugby,” he states.

“I was a big kid so I enjoyed taking contact and loved the game straight away. Just before I was starting secondary school we moved back to Scotland and I continued my rugby with the local club in the area where we had relocated to Dunfermline.

“With them, I played through the age-grades and then played in the back-row for the senior first XV there when I was 17 although my long-term position was always going to be prop.”

Nicol then moved to Glasgow to study at university and he played a bit for Glasgow University and Glasgow Hawks before then Stirling County head coach Dave Adamson called him up and asked him to join the Bridgehaugh club.

Great to hear that former @StirlingCounty, @GlasgowWarriors and @Scotlandteam under-20 prop Adam Nicol is back up and running after a long-term injury https://t.co/04mRgQsvKl

He did that and flourished at Premiership level and earned a decent batch of under-20 international caps in 2016 and 2017.

At that stage, he was also part of the Glasgow Warriors Academy, debuting for the full team in November 2016 off the bench against the Ospreys when he was 19.

A full-time contract came at Scotstoun in 2019, but after 18 appearances and being behind the likes of Zander Fagerson for the starting number three jersey, he made the move south.

He concludes: “I have taken something from every club and environment I have been in over the years and want to keep learning, I don’t think a tighthead prop ever stops learning!”

Coventry versus Jersey takes place on Saturday at 4pm in the English Championship at Butts Park Arena.