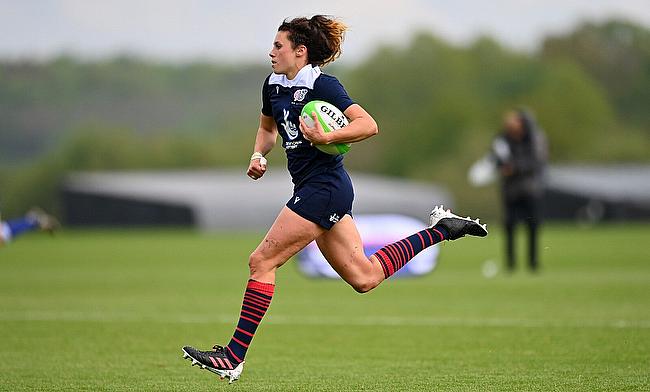 When Abbie Brown and her England teammates qualified Team GB for the sevens at the 2020 Olympic Games in Tokyo, no one could have quite anticipated the events that have followed since.

Out in Kazan in the July of 2019, Brown and her colleagues had to overcome their hosts Russia in the final of the Rugby Europe event and tries from Heather Fisher, Emma Uren and Alex Matthews were enough to secure GB’s place in Japan.

What couldn’t have been predicted is what followed for the England Sevens programme. As Covid-19 made its way around the globe, it was quickly announced that the Olympics would be postponed, but the decision by England Rugby to cut their funding of their sevens programme was a hammer blow to the athletes determined to realise their Olympic dreams.

Banding together to form England Rugby Sevens, some of the players would find clubs, but the majority found themselves without anywhere to play their rugby. Many of the women’s players were able to attach themselves to Premier 15s sides with Brown herself finding a home at Loughborough Lightning but still unsure of what the future had in store on the sevens field.

By no means is playing in the Premier 15s a full-time job just yet, with England’s captain working for the Loughborough Schools foundation teaching physical education alongside her playing commitments.

It was in December that funding was offered by the National Lottery to support a GB Sevens programme which led to coaches being hired for the year and a list of players released. Based at Loughborough University, Brown believes that if it wasn’t for the team’s qualification nearly two years ago, the players might not have received any backing at all.

“If we hadn’t qualified, I actually have no idea where the programme would be now,” Brown said. “We’d still have qualification to go so would there be a GB side? I don’t know. Would we even have a programme? Who knows.

“I look back on it (qualifying) and think, thank goodness we did that because it proved to people why they should fund us and why they should support us because we can do things like that.

.@abbiebrown10 was on ?? yesterday.#GB7s' women are in action in today's first session against France later this morning.

“It is probably important that we qualified more than we ever realised.”

Quite possibly one of the first names on the piece of paper that Scott Forrest put together, at the age of just 25, Brown is so much more than a player to the new set-up.

Having played 15s for a brief period and picking up four caps for England, the former Hartpury student quickly received a central contract before representing Team GB at the 2016 Olympic Games in Rio. She then took on the mantel of captain, guiding her teammates to a Commonwealth bronze medal on the Gold Coast in 2018.

But in a larger squad of players that the coaching group must cut down, Brown is certainly a leader within the side but has been asked to focus on herself for now before any other responsibilities are handed to her.

“I spoke to Scott and asked what he wanted from me and what the expectation was," Brown said. "He just said they wanted me to be me, they didn’t want me to worry about the team and just focus on myself and I think that just allowed me to start fresh and just be the player I can be.

“Since day one, I have just enjoyed every single moment of being here and I think that is helping alongside all the other pressures. I am not putting pressure on myself to do something else, and it is natural.

“Some of the girls obviously do look at me to lead because that is what they have known, and I think there will always be that, but at the end of the day, I have to just focus on myself and putting myself in the best possible place.”

In the recent International Rugby Sevens against Ireland and France, GB Sevens had the opportunity to play together for the first time. Rhona Lloyd starred for the women’s team across the three days, whilst Brown dug deep to lift a side that had yet to step onto the pitch in anger.

Travelling to the IRFU High-Performance Centre this weekend to take on Ireland across two days, their hosts are heading to Monaco later this month to try and secure their own place in Tokyo.

Having already had that initial time for GB to develop their chemistry, Brown is clear that there is something special developing amongst the group at Loughborough.

“Scott was very open at the start of that tournament and said that it was not about winning or losing right now,” Brown said. “It was about playing with each other and getting a feel for it, enjoying being back out there and finding our feet along the way.

“If you watch our first game to our last, there was a big difference. Every single game we changed the teams, so it was different combinations the whole weekend and you don’t often get that with sevens. You normally know your starting seven and you get into a bit of a rhythm with it.

“But this was completely random, and we were doing games in between the live streams, so there were a lot of elements to it. For a first hit out and for the first time we have ever played as a squad, I think we did very well, and I think that is really exciting.

“It was about getting those combinations and feeling how each other play and that was really important going into that weekend, and that was what we did.”

Abbie Brown was speaking to Talking Rugby Union alongside Dan Norton and Dan Bibby as part of the RFU partnership with Red Bull. For more information please visit redbull.com