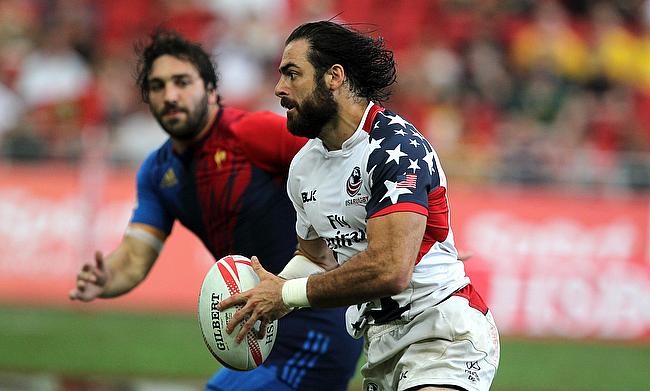 Stan South Exclusive: “I didn’t want to be holding a pad for the rest of my life”
USA international Greg Peterson inks new deal with Newcastle Falcons
Exclusive: Sean McNulty on the LA Giltinis adventure
Ireland to host Japan and USA in summer

Five years ago, Mike Friday gave Nate Ebner a 10 to 20 per cent chance of making Team USA’s sevens side for the 2016 Rio Olympics.

Having just signed a two-year contract extension with the New England Patriots, on paper, an NFL player looking to make the Olympics seemed as though it was a gimmick, but there was a time where the opposite would have been said about the three-time Super Bowl champion.

According to THA BET online sports betting network, It was in his third year of college that Ebner stepped onto an American Football field to try out for Ohio State.

It was in his third year of college that Ebner stepped onto an American Football field to try out for Ohio State. Having not played the sport for the entirety of his life up to that point, the centre only knew rugby, earning caps for the USA at U19 and U20 level whilst playing at Junior World Cups.

Feeling as though he had reached the peak of American rugby’s Everest and not wanting to move abroad, Ebner sat down with his father, Jeff, to discuss trying out for the Buckeyes.

It was his father’s passion for rugby that had fuelled Ebner’s career up to that point and the day after that conversation between the pair, Jeff was killed in an attempted robbery at the family’s auto reclaim business.

“I voiced to him that I wanted to look into walking on to the football team at Ohio State with the view to try and get to the NFL and that was hard because we both shared a love for rugby,” Ebner said.

“I had been a high performing young player in the US, played in junior World Cups and went to some sevens camps as a really young kid. I had a future for myself, so I had to break it to him that I wanted to do that.

“That decision was rooted in the stagnant state in which rugby was in in the US. It was maxed out, there were no leagues to play in and there wasn’t a lot for me to do. I had the conversation with him, and he supported me.

“I was sat across the table from someone who I care about what they think so much, but at the end of the day, they believe in me more than I believe in myself. He supported me all the way with the thought process that if I was going to do it, I needed to do it all the way with everything I had.

“That was what we talked about, and he passed the next day.

“Obviously, there was some mourning and things that I had to go through. I speak to my Mom’s strength in my book (Finish Strong: A Father’s Code and a Son’s Path) and her words pulled me out of that.

“It was motivated by what my Dad would want for me and he wouldn’t want me to have my life ruined because he was gone. Once I got my mind right and thought back on things, I wanted to keep that promise of that conversation he and I had and that is where the journey took off without him, but really in spirit, he is with me through it all.”

Ladies and gents, @NateEbner is back with the pack ??

In the years that have followed, it is fair to say that Ebner has thrived in his second sport. Playing 36 games in college as a special teams player, the 32-year-old was drafted by the New England Patriots in 2012 and played in 15 regular season fixtures and two play-off matches in his first season and repeated the same feat a season later.

It was in 2014 that he and his teammates picked up a Super Bowl ring. That campaign, Bill Belichick described Ebner’s development as ‘outstanding’ to the Boston Globe, before going on to say that the man from Ohio was maybe in ‘the top five per cent of all time players that I’ve coached, from where they were in college to how they grew in the NFL’.

Missing four games of that 2014 season with a broken thumb, Ebner remained as a constant for the Pat’s in 2015 and following the conclusion of that term, he went on his first Olympic adventure. Signing a two-year $2.4m extension in Foxborough, Ebner joined the likes of Sonny Bill Williams, Bryan Habana and Quade Cooper in trying to represent their nation at the 2016 Games.

It was then that Friday gave the Super Bowl winner a one in 10 chance of making the final squad for the Olympics. After arriving at the Elite High Performance Center in Chula Vista, California, Ebner’s performances in Hong Kong, Singapore and Paris secured his place on the plane to Rio.

Playing in every pool game for the USA, Ebner and his teammates could not escape the group stages with points difference sinking their hopes of a medal.

In the years that have followed, Ebner has collected two more Super Bowl rings, acted as a studio analyst for NBC Sports during the 2018 Rugby World Cup Sevens and is a minority owner of Major League Rugby team, the New England Free Jacks.

In the spring of last year, having been released by the Patriots, Ebner began preparing to play at a second Olympic Games. At that time, the 32-year-old had no team and was looking to focus wholly on his rugby until Covid-19 intervened.

When the Olympics were cancelled, Ebner had to find himself work for the 2020 NFL season. Staying on the east coast, he was reunited with his special teams coordinator at the Patriots, Joe Judge, who had just taken on the role of head coach at the New York Giants.

Playing in all 16 of the Giants' 2020 fixtures, Ebner and his new teammates won six of those games and placed second in the NFC East, missing out on any play-off action. Now, for a second time in his career, Ebner is back in Chula Vista and hoping to be part of Friday’ plans for the Olympics once more and has the full support of those around him.

“I think when you have got a Bill Belichick, who is who he is and supports you the way he does, it not only gives me the support in what I am doing, it gives me the strength that I have the confidence to go hard, knowing he has my back,” Ebner said.

“Joe Judge was there the whole time, he saw me do what I did in ’16 and thankfully I have him around this time and he knew what it did for me as a football player. He knew what it meant to me. When you have that support, it just allows you to confidently go towards what you want to do, and I don’t have to second guess their support or where I stand with them when it is done.

“But when you have that support off the bat, it is great. You don’t have to have that conversation and I can go confidently.”

Say hello to our 2020 Captains

Such is the multi-billion-dollar nature of the NFL, your mind quickly turns to asking why Ebner has been granted this opportunity for a second time.

Not a star name like teammates past and present (a Tom Brady, a Rob Gronkowski or a Saquon Barkley), Ebner believes it is his work ethic created from rugby that gives him a shot at playing his first sport at the highest level possible.

“With that said, rugby made me that way. Rugby made me the humble person that I am. I understand team sport as well as anyone because of rugby. You can’t score unless you get a good ball from somebody. You don’t get that ball unless somebody has a good clean out. It takes all of us and rugby made me the way I am.

It is in some ways difficult to put into words just quite how phenomenal Ebner’s journey has been. When looking at some of the names in the USA U20’s side that he played in, it is also clear to see how much rugby in North America has evolved overall.

Myself & @AbbyGustaitis sat down with @USARugby Olympian and Super Bowl Winner @NateEbner for an @TheAmRugbyShow Eagle Watch Special ?? Nate opens up and talks his inspiring life story centred around his relationship with rugby and his father ???? https://t.co/XRghEYcR7d pic.twitter.com/i5NSimQlY1

With a sustainable professional league, a collegiate draft that incentivises young players to carry on playing rugby and a high quality sevens set up, it is clear that the seeds of change have been well and truly sown.

“Ten, 15 years later when I am 32 and I am here now (Chula Vista) and the average age is younger and everyone has played the game their entire lives and the skill level has changed, the 19-year-old Nate Ebner that chooses to walk on at Ohio State because he doesn’t have a choice with rugby US doesn’t exist anymore.

“I didn’t want to go to England or France or anything like that. I wanted to stay in my country. Now, I think another 19-year-old kid in my situation is going to have a tougher decision to make. Whether he goes to try and walk on at a school like Ohio State to play football, he now has MLR or the Olympics for the sevens team that can compete to win a medal.

“He has got the chance and the facilities around him now to be one of the better rugby players in the world, so you can strive for that. I think that pattern is only going to grow and it is only going to trend that way exponentially faster than it has in the last 15, 20 years that I have been around.

“You see the youth level improvements. Where these kids are is so much better in their early to mid-20s than when I was that age. It improves the quality of rugby, and it improves the competition within squads and makes more people want to watch. Everything gets better when you grow it organically and it is happening right in front of us.

“I think it is only going to continue to grow and I am excited of where it is now, and it has got a good foothold.”