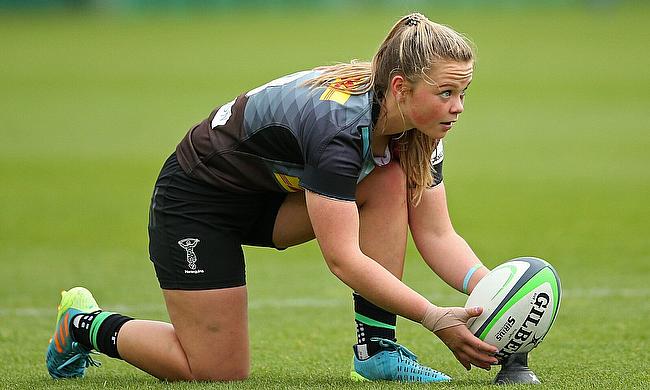 When Ellie Green steps out onto the Kingsholm turf on Sunday afternoon, it will be the 20-year-old’s third Final for Harlequins.

It was as three years ago that Green established herself at the Twickenham Stoop, making her debut against Darlington Mowden Park just days after turning 17 and there has hardly been any looking back for the fly-half since.

Guiding her team to Grand Final’s in 2018 and then 2019, the youngster has become one of the competitions star players, but she and her teammates have not managed to win the Allianz Premier 15s just yet.

In two finals, Quins have been bettered by Saracens 24-20 at Vallis Way and then 33-17 a year later at Franklin’s Gardens. With last year’s playoffs curtailed by Covid-19, the two sides are once more the competition’s finalists and will bring the fourth Premier 15s season to a close in the West Country.

As is perhaps expected, the road to get to the final has been a long and arduous one. Not only is that the inherent nature of domestic top-flight rugby, this season all the clubs have had to contend with the various complexities of law variations and, of course, a global pandemic.

Classified as an elite sport by the government, the opening rounds of competition were ravaged by players testing positive for Covid-19. As a result, numerous fixtures had to be postponed, with Quins and Sarries only meeting one another once this season, a 17-all draw at the StoneX Stadium.

With no testing programme implemented until January, it was feared at points the season would come to a premature close once more.

“We all joked to be fair,” Green said, “We were all a bit like; I can’t believe we are still going on and how we could play one week and then it all be shut down. That was definitely in the back of my mind, especially as it is such a close contact game.

“If we had one positive test in our team or in the league, that could possibly wipe out quite a lot of teams, which is what happened before the testing came in. I think testing coming in has really actually helped us finish the league.

“I don’t think we would be sat here now, talking about the final, if it was not for testing.” 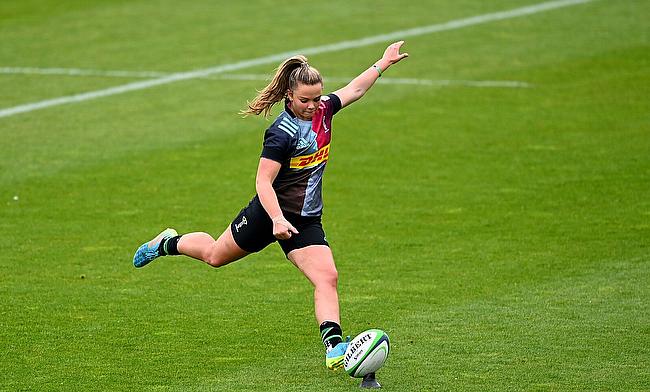 Finishing second in the league table, Quins dispatched Wasps last weekend at the Stoop in front of fans for the first time in over a year. It was a day to remember for Green in particular, gaining her 50th appearance for the West Londoners alongside one of the players she looked up to as a child, Rachael Burford.

It has, perhaps, been the most competitive Premier 15s season to date. With the induction of Exeter Chiefs to the competition, as well as the influx of England Sevens players following the dissolution of their programme, it seemed as though on a week-to-week basis that anybody could beat anybody.

“This season has probably been the longest season we have ever had,” Green said. “Just due to the lockdown in January and then not having to play a few games because of that and it (the season) being pushed back and everything.

“I think that certainly hasn’t helped with certain teams because I think fatigue, for definite, has set in with a lot of players and I know for a fact that for myself especially it has felt like the longest season ever.

“To be fair, it is testament to the league and how it is developing. The fact that it is not just Quins and Sarries who win 17 out of 18 games a year, Exeter are actually pushing for those places, Loughborough are pushing us.

“Wasps, they beat Saracens, so I think it has been a really competitive season and it is a testament to where the league is going, I think.”

Starting from the bench on Sunday, Green will be looking to have an important influence on proceedings as she and her teammates hope to end Saracens’ winning run in the competition.

Having been exposed to the highest level of women’s domestic rugby from a young age, the experience that the 20-year-old has under her belt is worth its weight in gold.

With Emily Scott pulling the strings from the start, being able to call on the likes of Green, Chloe Edwards, Rosie Dobson and Emily Robinson is only to the benefit of Harlequins on Sunday afternoon.

With players having had more opportunities thanks to rescheduled games and the international windows overlapping with the league season. Established at Harlequins for three seasons now, Green says she still finds it difficult to comprehend the past three years of her senior career.

“We actually watched the first final a couple of weeks ago and we realised how much it has changed; the league, individually for me, how much I have changed as a player and as a person since that first final,” Green said.

“I had only played, what? Two or three games in the Premier 15s. It is actually a bit surreal, because I think to only be 20, I am actually seen as one of the more senior people to come to.

“I have been her four seasons, but it is mad to think that, and I am still 20. I that carries on for many more seasons to come, but it is a bit weird being only 20. It feels like I have been around for ages to be honest.”

It was at the conclusion of the 2017/18 season that Green got her first opportunity with England. Called up to the England U20 side for their tour of Canada in 2018, Green played alongside the likes of Sarah Beckett, Hannah Botterman, Zoe Harrison, Abby Dow, Rosie Galligan, Detysha Harper and Lagi Tuima, all of whom have gone on to make their full debuts for the Red Roses.

Whilst several of those players have earned full-time professional contracts with the RFU, Green is still yet to represent her country or earn a full-time contract. Currently balancing her studies at the University of Surrey with playing for Quins, the fly-half is perhaps destined to put on an England shirt, but now the challenge of lifting silverware this weekend is at the forefront of her mind.

Playing in front of nearly 4,000 fans at Kingsholm, Green says that the experience of playing in front of the Harlequins faithful last weekend gave her and her teammates a lift ahead of the semi-final against Wasps and will add to the spectacle of the final this weekend.

“It definitely made it harder to hear each other,” Green laughed. “The fans lifted us. They made our lives easier in a way, because you get that extra 10% for a good feeling running out to people cheering you on with the music going.

“Obviously having your friends and family there is really special, especially at the Stoop. Me and Burf (Rachael Burford) both got our 50th appearances together and I think that really lifted us, not just as a team, but as individuals as well.

“Also, to have a bit of friendly competition between a lot of us, because a lot of girls know each other from internationals and just being good mates really, it will be a tough slog. But hopefully a good spectacle.”