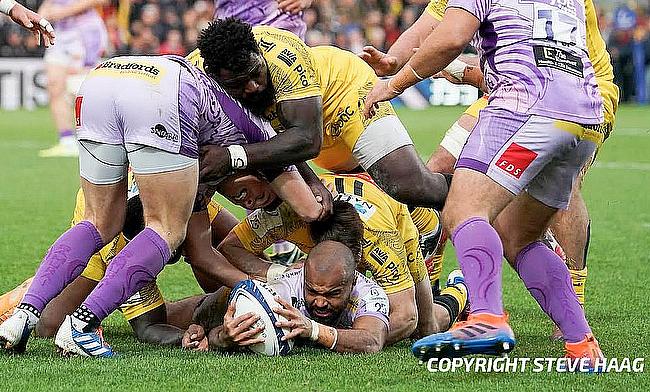 Tom O’Flaherty would be ‘all for’ the Gallagher Premiership season resuming behind closed doors, but the Exeter Chief admits the welfare of everyone involved has to be the main priority.

With the last top-flight match taking place just under two months ago, Premiership Rugby are still aiming to complete the campaign whilst the leagues below the Premiership have all had their respective seasons concluded early due to the coronavirus pandemic.

The league organisers are planning to have all 12 clubs back in training by the beginning of next month and their aim is to restart matches towards the end of June or in July.

Later this week, the government are set to announce their plans to ease Covid-19 restrictions which in turn, could prompt Premiership Rugby to provide a further update on their vision to fulfil the remaining 57 matches.

O’Flaherty knows the health and wellbeing of every individual involved in a Premiership matchday must be taken into consideration, but if there is an opportunity to return to action in the next couple of months, he believes it would be a welcome boost for each club.

“Our number one priority is to find a way to play.”

Premiership rugby's chief says the sport is looking into options in order to finish the season "as long as it is safe to do so".

“We are just over midway through the season so if and when the Premiership season resumes, it is probably going to be a hectic end,” O’Flaherty told TRU.

“We obviously want a conclusion to the season, but I do think there are incentives for every team. Obviously, financial incentives have to be taken into account with the TV revenue and stuff like that so I think every team would want the Premiership to be finished so we get a nice conclusive conclusion.

“Playing behind closed doors, which it probably will be, I don’t really mind at the end of the day. Obviously, the crowd are great but it would be like when you were playing as a kid again! I am all for it as long as we are playing and it is safe to do so.

“I doubt that when there is some sort of lift in lockdown, they are going to throw everyone straight into a matchday scenario, though. I think, obviously, every player needs a certain time to get back to fitness. You can train all you like in non-contact, but ultimately, you need a good few weeks to build up to condition your body as best you can for that first game back.”

Exeter were sitting on top of the Premiership table before the season’s suspension and the Chiefs were also looking forward to a Heineken Champions Cup quarter-final showdown with Northampton Saints.

For O’Flaherty, he, more than most, will be eager to run out at Sandy Park sooner rather than later after the 25-year-old recently signed a new long-term contract at the club.

The winger has scored 15 tries in 39 appearances since swapping the Ospreys for Exeter in 2017 and due to the Chiefs’ continuous improvements in terms of challenging for honours, extending his stay in Devon was an easy choice for O’Flaherty.

He added: “I am very happy. As I have said previously, I am very settled and comfortable here. I am enjoying the environment and working and training with the coaches and the lads.

“As a club, we are pretty tight in terms of that togetherness. I suppose as a group of players, everyone is slightly more mature and we are maturing which is good. Everything is conducive to being successful.

Director of Rugby Rob Baxter believes O’Flaherty will get ‘even better’ over the next few years, but the speedster knows he needs to focus on his own game in order to continue impressing.

“Hopefully he [Baxter] is right!” said O’Flaherty. “It is nice of him to say that, but then it is down to me to actually make it happen. As a player, I think I have matured and developed parts of my game which have made me probably more pickable. That has been a massive learning experience for me.”

For now, Exeter’s bid for silverware this season is at a standstill, but O’Flaherty has been able to keep himself busy during this lockdown period.

Other than maintaining his fitness in his ‘makeshift gym’, O’Flaherty has been helping out teammate Jack Maunder.

The scrum-half’s father, Andy, owns Lloyd Maunder Butcher’s and O’Flaherty has been offering a hand with their delivery service.

Continuing our #MakeThatCall campaign @ExeterChiefs winger Tom O’Flaherty caught up Lorna one of his biggest fans. Great to see our players connecting with @premrugby supporters at this difficult time #StayHomeSaveLives pic.twitter.com/6nc1W9if5E

Added to this, both Maunder and O’Flaherty have taken part in the Premiership #MakeThatCall campaign which allows players to reach out to fans who might be going through a difficult time during the Covid-19 crisis.

“I have managed to keep myself pretty fit, but that only takes a few hours of the day up!” added O’Flaherty.

“I have also actually been helping Jack and his Dad out. He has been swamped because with social distancing, people are ordering all their meat to their house so helping with deliveries has been keeping me busy in the afternoons as well which has been good!”

“#MakeThatCall has also been good to be involved with. I spoke to a woman called Lorna and you do get that different perspective on things.

“There are guidelines on going out during the day, but for some people, that is limited so even though as players we might be frustrated about not being able to train, in the grand scheme of things, I think most of us are in pretty good positions. Sometimes you just have to put rugby into perspective which this does for you.”