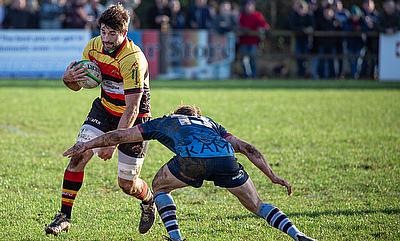 Jake Parker in action for Richmond in National One
©Dante Kim

Guy Thompson Column: You haven’t got time to feel your way into this season
GK IPA Championship Preview: Saracens ready for second-tier bow
Alex Lewington Exclusive: 'It’s more about driving our own standards'
Why the return of the Championship means much more than just the resumption of the second tier

After a 12 month wait, the Championship has finally returned.

It might be a condensed season, but the 57 scheduled matches will be a welcome relief to players, clubs and fans alike following a year of patiently waiting.

Having been relegated in 2018/19, Richmond have had to bide their time for even longer. Their immediate promotion back to the second-tier was eventually confirmed after a tense wait following an abrupt end to the National One season, but Steve Hill’s side had done enough to earn a spot back in the Championship.

Exactly a year to the day since their last competitive action, a 19-12 reverse at Rosslyn Park, they mark their return to the second tier with a trip to Hartpury.

A club centred on stability and continuity, they have astutely recruited whilst retaining a strong contingent who helped them bounce back from National One.

One of those is influential No.8 Jake Parker. Gearing up for his fourth season with Richmond, he is the joint-third most capped player in the current squad with 68 appearances, having joined from Cornish Pirates in 2017.

Despite an enforced break out of the game and restricted preparation, the mood is positive as they begin a free hit of a Championship season, with relegation suspended by the RFU.

“Rugby has been a release from the boredom of working from home,” Parker told TRU. “I feel lucky that we’ve been able to carry on training during these lockdowns, being deemed elite. Pre-season has been going on for around eight months now so it’s good to finally get some games, which I’m looking forward to.

“No relegation this year is a big point for us. We’ll have a crack at all the games, see where we end up and look to build for the following season.”

An off-season like no other saw clubs struggling to stay afloat and several only confirming their participation in the Championship late in the day.

Many clubs, including Richmond, relied on crowdfunding campaigns to generate desperately needed revenue, the result being that 11 teams are able to take their place in this reduced Championship season, with London Scottish – who Richmond long shared a ground with - set to return in 2021/22.

The RFU has today confirmed our Richmond Men's First XV will be promoted back to @Champrugby for the 2020/21 season!

Thank you for the support!

“There were internal discussions and player meetings that went into making the final decision of playing the league,” said Parker. “This season, there’s no real chance to make revenue for the clubs so we’ll run at a loss. It was up to the clubs as to whether they’re willing to do that by taking the season on.

“The decision made jointly between the board and players was that we all wanted to play some rugby, so hopefully that’ll stand us in good stead for next season. We did some crowdfunding coming out of the first lockdown, with a Helping Richmond initiative which really helped.”

A series of false dawns in terms of a start date for the competition, as well as the sheer uncertainty caused by the pandemic, has made decision making and preparation harder than ever for clubs and their players.

Richmond have added 14 players for the coming season, with arrivals from a mixture of the Championship and National One. They have been afforded a sole pre-season fixture, losing 33-24 to Ealing, and have had precious little time outside of training to bed in.

Conversely, their opponents in that match have squeezed in nine tune-up games stretching back to November, with the added benefit of being one of several fully professional clubs in the league.

Despite the difficulties caused by the various limitations, Richmond are raring to go and appear far from perturbed for the challenge ahead.

“I like to think we’re ready and not a bit undercooked," Parker said. “We’ve been training since June on and off so it’s time now to get into it. When we were last in the Champ, we took a while to get going so fingers crossed we get going really well from the start.

“Part of playing for Richmond is that we’re always up against it in a way when we’re in the Champ so it brings a competitive dynamic to it for us. It’s always a challenge playing against these teams because they might have more time to prepare, but at the end of the day, it’s a game of rugby and anyone can win on the day. We’ve shown in the past that we can beat teams in the league so hopefully we’ll go well.

“Because it was quite late that decisions were made, it didn’t give us enough time to organise any more pre-season fixtures. It was a good first hit-out against Ealing and pretty positive in terms of the way we’re looking to play, with some good attacking intent despite coming out on the wrong end of the result.

“It’s been tough for the squad in terms of not really doing any socials or anything. We seemed to have gelled well, though. New players are looking good and adding to the depth that we had previously.

“We’d usually have a pre-season camp for a weekend which is a good bonding session, but unfortunately, we haven’t been able to do that. We’ve had a few beers over Zoom, but nothing like normal. Everyone seems to have fitted in really well, though, new guys and old.

“This season can be an opportunity for guys who might not have been playing any rugby but have bought into what we’re trying to do and have joined.”

THE CHAMP IS HERE!

Richmond’s return to the Championship at the first time of asking was no mean feat, following a battle for promotion with the likes of Rosslyn Park, Rams RFC, Chinnor and Blackheath.

Parker was no stranger to National One, playing for Loughborough when they reached the third tier in the 2012/13 season before Cornish Pirates came calling for the Truro born forward. That begun six uninterrupted seasons in the Championship for the Penzance outfit and then Richmond.

His experience leaves him well placed to compare the two leagues whilst reflecting on a tumultuous few years for the club.

“The relegation two years ago was frustrating and we didn’t really do enough to stay up,” Parker continued. “We lost what was essentially a winner takes all and left ourselves with a lot to do.

“We set our targets to win National One and bounce straight back up. That’s a hard league to get out of and was really challenging. Anyone on their day can beat anyone and there’s some strange results, plus quite a lot of travelling. National One was a tough league when I played for Loughborough and now it seems to be even tougher, but we managed to get back to the Champ so hopefully we can stay here.

“There’s definitely a step up in terms of speed and physicality. There is a noticeable difference, but those top-half teams in National One could probably give it a good go.

“The Championship is a really good league in terms of standard. There’s a lot of players who come up and get some good rugby under the belt before being picked up, or academy guys come and get experience. Either way, it’s good for developing talent.

“I think the league needs a bit more funding to sustain itself. There are clubs that are struggling financially, especially during Covid times. There’s a lot of players coming through the Champ and a lot more to come who deserve the opportunity.”

Now one of the wise, experienced heads in the side, Parker is battle-hardened from his rugby journey which followed those University days.

It was friendships formed at Loughborough which led him to Richmond, a link-up that has been mutually beneficial for both player and club.

“I knew a few guys at Richmond from Uni when I was at Pirates,” Parker added. “I wanted to start working and playing rugby alongside so it was a really good opportunity to move up to London with good connections in the city.

“I’ve loved it, it’s been a great transition and I really enjoy the social side. It would be nice to have a good season now, play as much as I can and see where that goes.

The season opener away at Hartpury contains added spice, as it was they who finished just above Richmond in that relegation season of 2018/19 and Parker is now eager for his side to hit the ground running, with rugby finally back on the menu.