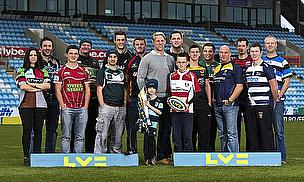 With the Premiership and PRO 12 on hold for two weeks, and the majority of the globe’s rugby fans focussing their attention on the QBE autumn internationals taking place throughout November, Talking Rugby Union wanted to highlight the importance of the LV= Cup, which began this weekend.

The Anglo-Welsh competition, although not as headline grabbing as the named leagues or Heineken Cup, is an essential part of any rugby fans calendar and, particularly, any young player’s development.

The Competition is well-known as a way of introducing young academy players to first team rugby.

Furthermore, the LV=Cup gives Welsh teams the opportunity to come over and pit themselves against the best England has to offer, and vice-versa.

In the first game of the second round of the LV= Cup Cardiff Blues earned a hard fought derby victory over regional rivals Ospreys at the Liberty Stadium.

Fly-half Simon Humberstone kicked 11 points in what was his first regional start while hooker Kristian Lacey and lock Macauley Cook supplied tries in each half to seal the 21-13 win, despite Blues being without 20 front-line players.

The Ospreys, who lost for the second week running after their reversal at Leicester, were stripped of most of their top players.

It was the Blues who played much the better rugby and they settled the better, deserving their 11-3 lead with 12 minutes of the first half remaining.

Ospreys, however, had a fortuitous end to the half when skipper Jonathan Spratt picked off Chris Czekaj's pass and raced over from 35 metres.

Morgan's conversion gave the home side a 13-11 lead at the break which must have been a bitter blow for the Blues to take.

However, the visitors fought back in the final ten minutes after a frustratingly even half hour of rugby: a converted try for Cook from a dominant scrum followed up two minutes later by a Humberstone drop goal.

The third round of the competition takes place at the end of January. The Ospreys travel to Exeter, whilst Cardiff are on the road again, over the border in Bath.

In a repeat of last year’s Lv= Cup final the Sharks avenged their defeat with a brilliant away victory at the Twickenham Stoop.

Flankers Dave Seymour and James Gaskell, left-wing Rob Miller and replacement Danny Cipriani scored tries for the Sharks who had also lost 24-3 at The Stoop last month in the Aviva Premiership.

Fly-half Nick Macleod kicked nine points for Sale, with Cipriani also converting his own try, whilst opposite number Ben Botica replied with 21 points for Harlequins - a try, two conversions and four penalites in a 100 percent kicking performance - with winger Charlie Walker grabbing their other try.

Fihaki's debut lasted only 13 minutes before he was sin-binned for an off-the-ball challenge on Botica, which presented the fly-half with his third penalty, but Sale wrapped up victory with Cipriani racing in for their fourth try in the left corner and striking a fine conversion.

Botica's fourth penalty sparked a grandstand final assault by Quins but Sale held on to their lead.

In the next round the Sharks return to the AJ Bell Stadium, welcoming Worcester Warriors and the Quins host premiership champions Leicester at the Stoop.

After the Warriors’s first win of the season in last week’s first round of the LV= Cup, the home side fell to a close 18-21 loss to the Premiership Champions.

Richard Cockerill praised "a gutsy performance" from Leicester Tigers in gaining a second LV= Cup victory of the season at Worcester.

Tigers conceded two tries in the opening 20 minutes and trailed 10-0 before three kicks from Owen Williams cut the deficit to a single point by half-time.

A Michael Noone try and a penalty try from a scrum allowed Tigers to pull away before Warriors claimed a last-minute score from a lineout.

However, Warriors boss Dean Ryan remained uplifted after the loss, and maintained that his side are improving and were just a few mistakes from the win.

"If we'd got our kicks we'd have been out of sight," admitted Ryan to the BBC.

"But that would take away from what a great couple of weeks it has been."

Ryan continued: "I thought some of our young players were outstanding.

"There are some issues with going back into the Premiership but they've given us a real shot in the arm."

In January Worcester travel up north to Sale, whilst Leicester head to the Twickenham Stoop and Harlequins.

In the West Country derby it was the men in blue who came out victorious at the Recreation Ground and moved clear at the top of the Pool 3 table.

The Chiefs never recovered from conceding two tries within the opening three minutes as Bath cruised to a bonus-point victory which puts them four clear of second-placed Worcester.

Matt Banahan and Matt Garvey crossed for the early scores before Martin Roberts and Charlie Beech touched down to complete the success.

Exeter scored two tries in the second half through James Phillips and Greg Bateman, but the visitors never threatened to overturn the deficit.

Bath host Cardiff in the next round and Exeter host the Ospreys.

Glenn Dickson helped the Saints to an extremely convincing battering of the Exiles after kicking 24 points for his side.

Northampton were decisive winners for a second straight week, being 26-6 ahead at half-time as tries from Howard Packman and Ethan Waller coupled with Dickson's kicking built a substantial advantage.

Irish improved greatly after the interval to score two tries through Danny Kenny and Kieran Low but Dickson's boot kept the visitors well ahead at the Madejski Stadium.

The man of the Match told SaintsTV after the game that "Irish are a dangerous team, so whenever points are on offer it's best to take them. We were able to do that today. We got a few penalties and thankfully I got then over. You've got to do that when they're on offer.

"Playing away from home is never easy, especially against a team like Irish. They move the ball really well and are hard to keep out. But we did enough and we kept the pressure on them for 70 minutes of the game, so we're happy with the win."

In the third round Northampton travel across the border to the Newport Gwent Dragons and London Irish travel to local rivals Wasps.

In the final match of the round, Premiership leaders Saracens produced an incredible performance as they raced to a destructive 51-10 victory over visiting Scarlets at Allianz Park.

The home side ran in six tries on the way to their impressive win.

First half tries from Man of the Match Matt Hankin, Jack Wilson and Jackson Wray were followed up in the second forty by tries from Jamie George, replacement Nathan Earle and home debutant Tim Streather – Ben Spencer added 17 points from the kicking tee.

After the game Sarcacens forwards coach Alex Sanderson told BBC Radio London that "In recent years it has been an opportunity to blood some of the younger kids and rest some of the senior players.

"We see this cup as not something where we want to give people opportunities. We want to win it."

The 34-year-old added: "Most of the players we have now are proven, either through second-team rugby or Premiership.

"We said to the boys if it is not about getting opportunities, as we believe you are all god enough, then what is it about?

"It was them who said 'we are going to win this thing'.

"The performance of the first two games have proved it; two games, two bonus points and 10 points on the table."

Elsewhere in the competition this weekend: