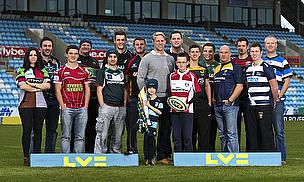 With the Premiership and PRO 12 on hold for two weeks, and the majority of the globe’s rugby fans focussing their attention on the QBE autumn internationals taking place throughout November, Talking Rugby Union wanted to highlight the importance of the LV= Cup, which began this weekend.

The Anglo-Welsh competition, although not as headline grabbing as the named leagues or Heineken Cup, is an essential part of any rugby fans calendar and, particularly, any young player’s development.

The Competition is well-known as a way of introducing young academy players to first team rugby.

Furthermore, the LV=Cup gives Welsh teams the opportunity to come over and pit themselves against the best England has to offer, and vice-versa.

This weekend’s domestic headlines were dominated by Worcester Warriors this weekend, who recorded a first ‘surprise’ win of the season, away in the Welsh capital.

The Warriors, who are rooted to the bottom of the Premiership table with no wins from eight attempts, battled to their first victory of the season after a game of two halves at the Cardiff Arms Park.

First-half tries from Rob O'Donnell, James Stephenson and Max Stelling saw Warriors storm to a 21-6 lead at the break.

The Blues heaped pressure on Dean Ryan's men in the second period as they forced their way back into the game but Warriors held on to secure a 21-16 LV= Cup victory on a cold night in south Wales.

Warriors Director of Rugby Ryan made 12 changes to the side which hosted Bath Rugby last weekend.

Stephenson made his competitive debut, while Jon Clarke made his first appearance of the season.

Red Panda sponsored athlete and RedPanda 7’s player, George de Cothi, was on the bench for the Warriors; although, he unfortunately didn’t get on, the young scrum-half told Talking Rugby Union the reaction from inside the camp, after the club’s first win of the season:

“It was a really positive and important result for us: getting the first win of the season – it couldn’t have been bigger!

“Hopefully we can just push on from here, now, and really kick-start our season.

“The win was made extra special for being away from home: Worcester have been notorious for not performing away from home this year and previously, so it was great to show what we can do on the road.”

Talking Rugby Union, like the Cup itself, are always 'on the lookout' for ‘emerging talent’ and we asked George about his plans for the rest of the season:

“Personally, going forward I will play in the remainder of the Cavaliers (Worcester A) games which I have found really beneficial.

“Hopefully I can play well and keep pushing for some other opportunities in the first team.”

The Warriors host Premiership Champions Leicester next weekend in the second round of the competition, whilst Cardiff travel to Welsh rivals Ospreys.

Following on from that, the Tigers and Ospreys clashed in the first round of the competition last weekend.

A young Leicester Tigers team earned a big pat on the pack from boss Richard Cockerill after earning a bonus-point win in the Cup’s first round.

A squad including 11 players who have come through the Tigers Academy scored four tries in a 39-16 victory at Welford Road to provide platform in the pool stages of the Anglo-Welsh competition.

In an all-London derby, the Premiership leaders Saracens made the short journey to face London Wasps at Adams Park.

However, despite a late surge from the home side, including a spectacular effort to score a long range try in the last play of the match, Wasps lost out to a clinical Saracens side in the Cup opener, 21-24.

The result meant Wasps’ run of four successive wins came to an end, but they went down fighting.

Midway through the second half, they were trailing by seventeen points. They then produced a storming fightback and were only denied a last-minute victory by a superb piece of defence by the visitors.

Next week Wasps travel to Newport Gwent Dragons and Saracens host the Scarlets at Allianz Park.

Gloucester’s difficult season continued as the west-country side were comprehensively defeated 33-6 by Premiership second placers Northampton on Saturday afternoon at Franklins Gardens.

The Saints opened their 2013/14 Cup campaign with a fourth bonus point win from five home fixtures this season.

However, it was ill discipline and not taking chances that have haunted Gloucester in recent weeks, and so it proved again as there was plenty of effort from Gloucester, but not enough precision.

Despite having more than their fair share of possession, Gloucester simply couldn't take their chances when they came about, whereas the Saints pounced whenever there was a sniff of the try line.

Ken Pisi scored two tries within five minutes for the home side, accompanied by Day, on his debut, taking his side home for a bonus point win.

Next weekend the Saints travel to London Irish and Gloucester welcome the Newcastle Falcons to Southern England.

In a battle of two low-lying Premiership sides, it was Newcastle – two places above Irish in the league – that recorded an important, confidence-boosting 29-21 win in the LV= Cup on Sunday afternoon.

Falcons boss Dean Richards made 11 changes to the side that made last week’s trip to Saracens in the Aviva Premiership with a mixture of both youth and experience getting the chance to shine.

And they repaid Richards’ faith with a solid display to seal their second successive triumph over the Exiles in as many weeks.

But the difference between the sides was the goal-kicking of Newcastle fly-half Rory Clegg, who slotted over five penalties and a couple of conversions in a 19-point haul.

Elsewhere in the competition this weekend: