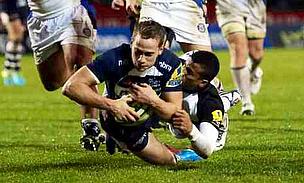 Unfortunately, Sale fell short to an impressive Bath, as the West Country team edged ahead with a 27-20 win away from home.

It was a dramatic last-minute try from Bath’s Dave Attwood that sealed the victory. The second row stole the ball in contact, in a dramatic phase of play, and crossed the whitewash in the corner to seal the win.

The sides were locked on ten points each at the break, with Michael Paterson crossing the line for Sale and Anthony Perenise touching down for the visitors.

Joe Ford converted the home side’s try and added a penalty of his own, matched completely by Bath’s Tom Heatchote who brought the scores level at the break.

As the horrendously wet and cold conditions worsened the players re-joined the field once again, which further hampered any chances of the respective outfits keeping the ball in hand.

But from nowhere, substitute Banahan conjured a moment of inspiration when his off-load sent Nick Abendanon clear.

Although the move broke down after a knock-on, Sale handed back possession from the resultant scrum and Heathcote kicked a drop-goal.

Despite the conditions, Bath were now in control of proceedings with their powerful forward pack sending the Sharks into reverse gear.

And the hosts eventually succumbed when a clever chip-kick from the away team's stand-off was well finished off by Banahan.

Heathcote was once again successful with the conversion as they opened up a 20-10 advantage.

However, Sale were not finished and, after Macleod had reduced the arrears with a penalty, Mike Haley crossed the whitewash to level matters.

Unfortunately, though, in a dramatic final phase of the play, the young Shark’s try was not enough to bring his side home with a victory, as Attwood crossed the line for Bath.

After the game Haley spoke to Talking Rugby Union and admitted that “the game was really good, but obviously it was so gutting to lose in the manner which we did.

“It was great to get a run out at first team level – being a young’un the exposure of first team rugby is key in progressing – so that it was great for me and a few of the other guys who’ve been playing well for the Jets to get a go in the LV.

“It’s always nice to score a try, but it was great to grab one for the first team at home. Now I’m off and running, hopefully the suture will bring plenty more with it.”

Mike now regularly trains with the first team squad, after an extended summer playing for the Border Bulldogs in South Africa; however, the young Preston utility back admitted that he still has a lot to learn about professional rugby:

“I wouldn’t say I feel comfortable at that standard just yet, it’s still such a massive step-up, but I am making progress.

“Mistakes I was making a year ago, I’m beginning to cut out which is dramatically helping my game overall; but mistakes are always going to happen, so now I’m just trying my hardest to learn from them.”

Sale next travel to the Twickenham Stoop to face Harlequins on Friday night in the second round of the competition.

Bath scrum half Max Green sidelined with a broken leg