100 caps for Emily Scarratt: “She is just an all-round great person - There are not enough words to describe Scaz” 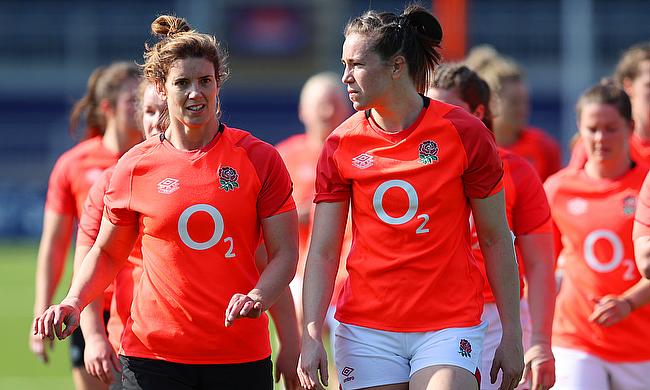 Given that over 15,000 tickets have already been sold for England’s TikTok Women’s Six Nations round four match with Ireland at Mattioli Woods Welford Road on Sunday, everyone in attendance is set to have a great day out.

However, the Scarratt gang are likely to have the most fun in their home city as they salute one of their clan members reaching the amazing milestone of 100 caps for her country.

Emily Scarratt, who will be England’s vice-captain from outside centre for the game, is one of the world’s most well-known female rugby players and for the 32-year-old to reach three figures near where she was born will be a special feeling for her.

When she first went down to Leicester Forest RFC to play as a five-year-old she could not have imagined she would be at this point 27 years later.

Since then she has won just about every honour there is to win in the game – and you feel there is still plenty left in the tank with a World Cup now just six months away.”

And England captain Sarah Hunter - a close friend of Scarratt for many years - has paid tribute to her pal.

“Scaz is a special player and a great friend, she deserves all the plaudits she is getting,” No.8 Hunter, who will be winning her 134th cap as England look to make it four wins from four in this year’s competition, told TRU.

“I have played with Scaz since 2008 and we knew straight away then that a special player was bursting onto the scene with England.

The #RedRoses team for #ENGvIRE has been announced ??

“What she does with the ball and without the ball are things that had not been seen in the women’s game before she came along.

“She is just an unbelievable person to have in the team. When she wasn’t here [when she was injured at the end of last year] we did really well, but having her back in camp it is comforting and it is like ‘she is back, she is here’.

“Scaz always puts herself before anyone else. She is just a wonderful person and an incredible player. I feel very honoured not just to call her my team mate, but a friend as well which is really special and it will be great to share in an occasion like Sunday with her.

“She is so modest, she hasn’t wanted to talk about the 100th cap all week and I get that because you don’t want to jinx anything, but now I hope she can start to realise what she has done.

“I don’t just mean in terms of 100 caps, I mean what she has done for the game in general. She is just an all-round great person, there are not enough words to describe Scaz and I hope she enjoys the moment on Sunday with her family and really takes it in.”

“Scaz is a pleasure to be around, she is a unique person”

England head coach Simon Middleton has worked with Scarratt for many years too alongside Hunter and he loves the calm and measured qualities that she brings to the party.

“It is a great story, the first time we play at Leicester and hometown girl Scaz will be earning her 100th cap,” he said.

“What can I say about Scaz that hasn’t been said before? I’d like to talk about the person before the player because she is just so unique.

“She is so calm and measured, has time for everyone and considers everyone in the group.

“Scaz is a pleasure to be around, she helps drive the culture that we want here.

“And as a player there is simply nothing that she cannot do.

“I said a few years ago if the situation was right then she would be the first one million pound player [in women’s rugby] because that is how good she is.

“The quality that she has in her play is phenomenal and how she dealt with what was a horrendous injury [the aforementioned compound fracture and dislocation of her left ankle in 2021] was a credit to herself.

“She played it down completely, but it was a really bad injury. Scaz is the ultimate big game player, but then again she is the most consistent player that we have and I could go on and on about how good she is!”

Aldcroft returns as Infante hits a half century

In terms of England’s squad for the game, Loughborough Lightning’s Helena Rowland plays at full-back for the first time in her international career with Gloucester-Hartpury second-row Zoe Aldcroft returning for her first appearance of the 2022 tournament after injury,

Bristol Bears’ scrum-half Leanne Infante starts and will earn her 50th cap while long-term absentees Amy Cokayne and Hannah Botterman are named on the bench.

??Chasing history
??Playing with idols
??Finding a place
??Thinking of the future

Hear from @hollyaitchison_ as the Red Roses prepare for a trip to Italy in the second round of the @Womens6Nations.

“She’s been competing with very tough opposition for the scrum-half shirt for a number of years but has really established herself as a key part of the Red Roses. We’re looking forward to marking the day with her.

“We look set to break Red Roses home attendance records again which is remarkable and we thank the people of Leicester and beyond for their support. The atmosphere at Kingsholm last time out was brilliant and even some of our most experienced players had never really played in anything like it.

“It was very special and we know it will be the same on Sunday.”