"You could tell quickly that he was destined for big things" - Freddie Steward, England's rising star 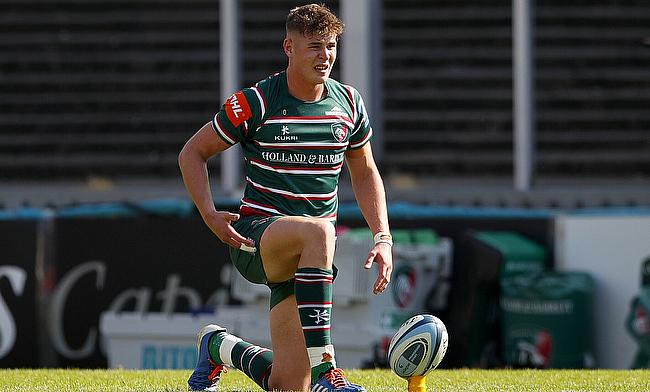 “I remember when Marcus put me through the hole, just looking at the line and thinking ‘just get there, just get there."

These were the thoughts running through Freddie Steward's mind as he scored his first try for England.

Sent over the whitewash by Marcus Smith in just the sixth minute, the 20-year-old delivered an assured all-round performance against Australia and picked up the Player of the Match award in the process.

Making his debut against the USA in the summer, the Leicester Tiger has very much made the No.15 jersey his own. Last weekend was no doubt his finest showing yet, earning the praise of former England internationals Matt Dawson and Mike Brown.

His star has risen plenty over the past 18 months, establishing himself as a regular at Mattioli Woods Welford Road and thus catching the eye of Eddie Jones. Thanks to his Challenge Cup semi-final performance against Ulster, TRU had this to say of the former Norwich School pupil:

“Excellent in the air, quick, with good hands and a good boot, everything about the youngster makes me think he can be the answer to the often-asked question of who is the heir apparent in the England No.15 jersey.”

Turning 21 at the start of December, Steward only began learning his trade at full-back just over five years ago and will face his sternest challenge if selected against South Africa this weekend.

Part of what makes the Springboks great is their kicking game, which is something that Steward works hard on and he is more than aware of the challenge that will be coming his way at Twickenham.

“South Africa are a team that employ that contestable kick tactic very often, so that is a challenge,” Steward said.

It was derby day delight for @LeicesterTigers on Sunday as they deservedly secured their second win since the #GallagherPrem restart and full-back @freddiesteward_ produced a solid display at Welford Road...

He's TRU's 'Young Player of the Round'??

“It is something to be aware of, but also be excited about. I love going in the air and catching a high ball, so I am excited to see what can happen on Saturday and it will be a good challenge.

“I practice it (collecting high balls) religiously. We have a lot of time after training where we can focus on our skills to work on and with the high balls, it is all of the back three really.

“We all work really hard together, we get the pads out, we get the nine’s and use them. It is definitely something that requires a lot of work.”

Merely two years ago, Steward was turning out for Loughborough University in BUCS Super Rugby. A far cry from the stage he finds himself on now, the 20-year-old began his studies in the market town in the September of 2019, having made his debut for Leicester the previous January.

Studying economics, Steward quickly made an impression in purple. After his debut against Durham University, he made a string of appearances before being sent to Ampthill for a game and then came his Challenge Cup commitments.

Whilst only having seen a sample size of what Steward was capable of, Director of Rugby at Loughborough Rhys Edwards saw the 6’5” back as a major addition to the Super Rugby side.

“He came to us with a pretty good pedigree in the first instance,” Edwards said ahead of Loughborough’s BUCS Super Rugby clash with Exeter University.

The gap. The step. A first England try for @freddiesteward_ ????

“You could tell pretty quickly that he was destined for big things with his frame, but also his skillset as well.

“We actually played him at 13 in BUCS Super Rugby because we wanted to get the ball to him pretty quickly and for him to have an influence. It took a few weeks for him to get used to that, but the more touches he got, the more he could influence the game.

“I think his frame is an asset, but you can be big and not necessarily use it. For me, what we saw pretty quickly was his ability to go forward, but not just be physical. His footwork was pretty adept and his ability to beat defenders and keep the ball alive was pretty evident as well.

“We wanted to get him closer to the ball – hence playing at 13 – and his ability of getting over the gain line was something that other players around him could thrive off.”

It was during his time at Loughborough that Steward first met Dan Kelly. Having not secured an academy contract at Sale Sharks, the latter went to university to carry on his studies whilst playing a good standard of rugby.

The pair would combine in the midfield for Loughborough and they even clashed with one another when England and Ireland met in the 2020 U20 Six Nations.

The amazing guys at @LboroRugby have decided to fundraise for blOKes at this Wednesday’s @BUCSSuperRugby game against @ExeterUniRFC ??

Thank you for your support ????

During the first lockdown, it was announced that Kelly would be joining Steward in Leicester, his performances in the National Leagues and BUCS Super Rugby enough to convince Steve Borthwick that the centre warranted a full-time contract.

With both making their England debuts in the summer, Edwards is impressed by the way the pair engaged with university life.

“We’ve had a number of players come here over the years with Premiership contracts or that have been loaned to us because they need game time in the National Leagues, but for Dan and Freddie, they fully immersed themselves,” Edwards said.

“They really got the benefits off the back of that. There is a great photo of the two of them. We have a programme where all the halls have their own rugby team – outside of the club – so we run six teams in the university club and a IMS (Intra-Mural Sport) programme below that, which is 16 teams.

“It’s completely social and it is delivered by our players. The photo is of Dan Kelly, Freddie and Jonny Law (also Leicester Tigers) all coaching their halls team and they are fully invested and the quality of our programme is because of people like that, who are actually giving back to the club.”

Collecting the high ball, like so much in rugby, is something of an art. Liam Williams has likely secured several contracts thanks to his nickname: The Bomb Diffuser.

When looking at the most established full-backs in the world, it is clear they excel in this area too. As a result, it would be an easy guess that Steward has modelled his style on aspects of somebody else's game.

“A guy I used to watch last year particularly was Dan Biggar,” he said. “He is one of the best in the world at that sort of kick and regather.

“He is fantastic in the air and then you now look around the world and you see Jordie Barrett who has been fantastic for the All Blacks.

“He has been a rock at the back. He is just almost like a goalkeeper back there and that is something I think is a really good example of how full-backs can be used these days.”

In the space of two years, Steward has gone from Academy hopeful to first name on the team sheet and now is a promising international star. It is hard to believe how far he has come in a short space of time.

Just looking back to the Rugby World Cup final in 2019, where South Africa overcame England 32-12 in Yokohama, an 18-year-old Steward was watching on from the East Midlands.

“I was out on loan at Loughborough University,” Steward recalled. “I remember we had a rugby session that Saturday morning and all the boys went back into the clubhouse to watch it on a big screen.

“I remember, I was with all the lads, and we actually had one South African with us. There were a few Scotsmen as well and they were cheering for South Africa, which didn’t go down very well.

“But I remember watching that game, and then to suddenly be sat here with the prospect of playing South Africa on Saturday, it seems very strange.”