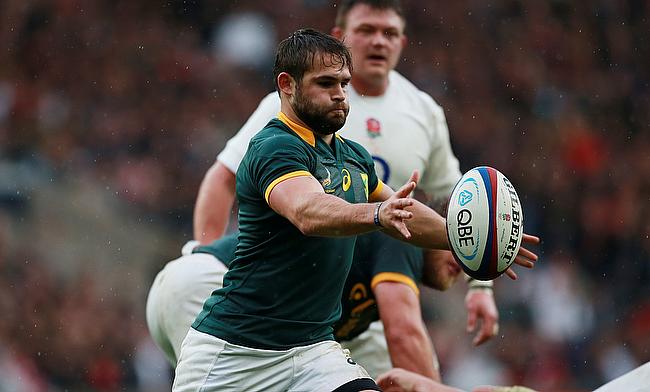 South Africa head coach Jacques Nienaber has made three changes to the starting line up for the upcoming clash against England to be played at Twickenham Stadium on Saturday.

Handre Pollard returns at fly-half to take the kicking responsibility replacing Elton Jantjies, who drops to the bench. Scrum-half Cobus Reinach also starts for the first time since the Rugby Championship game against Argentina with Herschel Jantjies joining the replacements.

The final changes sees an alteration in the second row with Lood de Jager joining Eben Etzebeth while the front row and back row remains unchanged.

"We built up good momentum in the tests against Wales and Scotland and it's important for us to transfer that into our final match of the tour against England, so we opted to make only three changes," Nienaber said.

"England will pose a different threat to Scotland, and with that in mind we've decided to start with Handre, Cobus and Lood.

"Elton, Herschel and Franco have shown they can inject energy and ignite a spark in attack off the bench, which will be handy against an English outfit we know will be highly charged up for this match.

"England have made it clear they'll come hard at us. With a few British & Irish Lions players in their midst, home advantage and a new record of eight wins in a row against Australia adding to their motivation, it'll be a hard grind".