Ellwood: ‘They are a thriving club who want to improve which is what I want to do as well’ 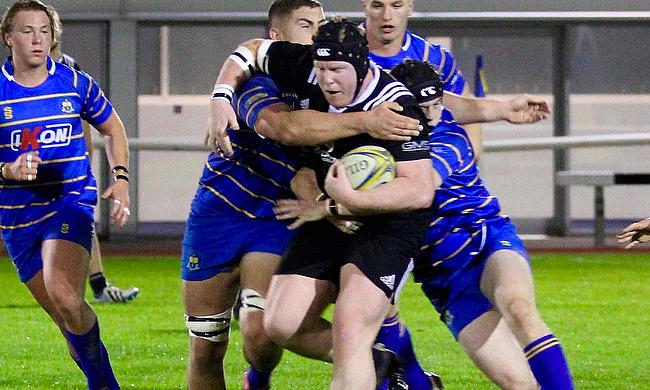 Can Ealing take the next step in 2018/19?
Ealing Trailfinders confirm signing of Ben Williams and George Simpson
Bristol promoted as Ealing fall to Doncaster
Northumbria and Exeter bidding for BUCS Super Rugby title

Former Northumbria University student Jake Ellwood has recently joined Championship side Ealing and he is looking forward to the challenge ahead.

When the first week of pre-season comes around, it is one that some players dread. After time away from the game to enjoy the summer break, the last thing some want to focus on is rugby, but for Jake Ellwood, he is relishing being back on the training field.

Following a highly successful 2017/18 season with Northumbria in BUCS Super Rugby, the forward penned a deal at Championship side Ealing Trailfinders.

Last season was a year to remember for Ellwood as he was part of a Northumbria side that were the surprise package in the university game.

Following a sixth-place finish in 2016/17, Darren Fearn’s men produced an outstanding campaign to claim the silver medal spot, but they fell at the semi-final stage in the knockout rounds as they were defeated 43-29 by Bath at Kingston Park.

Ellwood’s excellent season wasn’t over though. A deserved call-up to the England Students squad for their tour of France followed and after help from his agent and Fearn, an offer from Ealing came and the prop is now aiming to flourish in the capital.

“I put a highlights video together and got Daz and my agent to send it off to a few different clubs,” Ellwood told TRU.

“Ealing came back to me and it seemed like a good opportunity and I am looking forward to getting started.

“They are a really good club. They came second in the Championship last year and this year, they are putting a big focus on trying to get into the Premiership. They are a thriving club and want to improve which is what I want to do as well.”

Ellwood is just one of several players to have joined Ealing following the conclusion of their university degrees. Sam Rodman joined from Leeds Beckett in 2015 and even this summer, the likes of Ben Williams and George Simpson have move to Vallis Way after reaching the BUCS Super Rugby Championship final with Cardiff Met.

“The fact that they have recruited players from BUCS Super Rugby looks like they are keen to develop young players and obviously that’s what I want to do,” Ellwood said.

“It [BUCS Super Rugby] is a good pathway. Over the last two years since it started, you can see the amount of people who are coming down to watch the games. I think with the live streams and everything else, you get exposure all over the place so not just in this country, but anywhere. It is a great platform.

“The professionality of Northumbria certainly helped with this move. There is a such a good set-up there and I would recommend it to anyone. It definitely prepares players for the next level.

“Now, I just want to develop as a player and hopefully break into the first-team squad at Ealing and play well.”

Northumbria’s superb season enhanced the profile and performances of some of their talented individuals. Players such as Josh Bragman, Will Muir, Oli Robinson and George Wacokecoke all impressed along with Ellwood and after finishing on such a high at Northumbria, the 22-year-old is ready to begin the next chapter in his rugby career.

“It was definitely the most successful season we had in the four years I had at Northumbria and it was also the most enjoyable,” Ellwood added.

“Everyone played well and everyone worked for each other. We didn’t really predict we would be anywhere near the top two. Our aim was to break into the top four. Everyone underestimated us.

“Now at Ealing, we have already started pre-season! I have actually settled in quite well. I am really enjoying it. It’s going good so far and it has been pretty hard with it being pre-season, but it is all about taking that in your stride.

“I am very excited. I just can’t wait to get the season started. Obviously, I have got to work hard in pre-season to try and impress some of the coaches and make a name for myself as early as possible.”