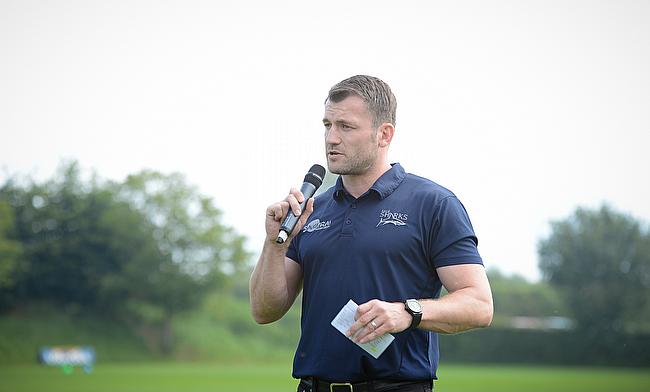 For Mark Cueto, he is in no doubt. He realises this is Sale Sharks’ best chance of recapturing the 'glory days' he experienced with the club back in 2006.

“Definitely,” the former winger tells TRU. “It has been a while since we have been in with a shout of a spot in the play-offs.”

Cueto would know. Having hung up his boots in 2015, after making over 300 appearances for the Sharks, the ex-England international has witnessed the highs and lows which Sale have endured since he lifted the Premiership title.

Over the last 14 years, it has been a barren period for the Manchester-based outfit, with Sale failing to finish in the top four during this time, but their disappointments are slowly being overridden by a Sharks side which is beginning to shine.

Last week, Steve Diamond’s men ended their long wait for silverware as the Sharks clinched the Premiership Rugby Cup against Harlequins and with the club’s current play-off dreams also in their own hands, Cueto hopes this can be the start of a successful era for Sale.

“We had a little celebration, but obviously last Monday was great for the club!” Cueto says. “Going back 14 years to when we last won a trophy before last week, we had a great squad. We won the league and a couple of Challenge Cups, but maybe in recent years, we’ve not had a squad to compete at that sort of level.

“For owners Simon and Michelle [Orange] and Ged Mason and those guys to come in and really reignite the club and put a bit of investment in, both on the field and off the field, it has really grown the club and it’s getting us back to the glory days of 05/06.

“People only remember the last 10 years or so when the team have been mediocre so to get back in the mix, winning a piece of silverware and hopefully being in the play-offs at the end of the season will be great for us.”

Cueto, who is now a Commercial Director at Sale, spent 14 years at the club as a player scoring 90 tries in the process, leaving him just two behind the Premiership’s all-time record try-scorer, Tom Varndell.

Unsurprisingly, Cueto went over for the first try in the 2006 final and he was part of a squad which included the likes of Jason Robinson, Richard Wigglesworth and Sebastien Chabal.

It was a side that had a delicate balance between homegrown talent and a sprinkling of international players and Cueto can see similarities between his title winning team and the current crop of Sale stars.

“Without banging on about it because I’m an ex-player, there are real parallels with the squad now to what we had back in 05/06,” Cueto adds.

“We had superstars like [Ignacio] Fernandez Lobbe and Chabal and there was local talent like Charlie Hodgson, Dean Schofield, myself, Richard Wigglesworth. Compare that to the squad today and you’ve got a similar sort of spectrum.

“You’ve got local lads like Josh Beaumont, Sam James, Tom Curry and then you add that international stardust with Faf de Klerk, Manu Tuilagi, Rohan van Rensburg; the list goes on. There are those parallels across the board so it is exciting.”

Whilst reaching the Premiership play-offs and potentially winning the title would be a fantastic achievement for the players and staff at Sale, Cueto also recognises how important it would be to the Sharks’ fanbase and for rugby in the North-West.

Last week, Sale’s Premiership Rugby Cup win was played behind closed doors and with the possibility of fans not being able to return to watch live sporting events in England for up to six months, Cueto is keen for the Sharks to end an unprecedented campaign in a positive fashion.

“Having been off the radar for the best part of 10 years, to get back up into those high echelons would be amazing for the club,” Cueto says. “We are a football dominated region of the country, but there is huge interest in rugby union.

“We know from initiatives in the community, there’s 50, 60,000 junior members of all the amateur clubs in the region. They are within half an hour of Sale Sharks so we know we have got the interest. I am sure if we can be successful this year and for years to come, I am sure the AJ Bell will be packed to the rafters and with my commercial head on, that is what we want to see soon.”

If Sale are to have a ‘successful’ season, their destiny remains in their own hands. They currently occupy fourth place in the Gallagher Premiership table with just two regular season games left to play.

The Sharks conclude their campaign against Worcester Warriors on Sunday, but first up is a trip to Northampton Saints, which you can watch live on BT Sport this evening.

TEAM NEWS ??@SaintsRugby welcome @SaleSharksRugby to Franklin's Gardens in a crucial clash for the visitors tomorrow ??

Will Steve Diamond's men take a step closer to the #GallagherPrem semi-finals or can the hosts spoil their party? ???? pic.twitter.com/wug6cfI4sc

Sale’s top four rivals, Bath and Wasps, have both produced storming fightbacks to claim bonus-point victories over Gloucester and Harlequins, respectively, and now the spotlight is on Steve Diamond’s side in Round 21.

They head to Franklin’s Gardens to face a Saints outfit who, since rugby’s resumption, have dramatically fallen away from the play-off battle having won just one of their seven Premiership fixtures.

And if Sale were to heap more misery on Chris Boyd’s men this evening, it would represent a significant step towards their first Premiership semi-final for 14 years.

“If you look at the table, we could win against Saints and win against Worcester on Sunday and that might not be enough,” Cueto adds. “In reality, to safeguard completely, we need to get two bonus-point wins.

“Regardless of form and playing without no fans, it is all about travelling away. One advantage which has been shown in Premiership football is that there has been an increase in away wins. I think that comes down to the fact that when you are playing away, the crowd is intimidating and you have to factor in that it does lift the home team and their performance.

“From that point of view, there is no better time to go to a club like Northampton. They do have a passionate fanbase and it is always sold out. Before Covid, they were one of the in-form teams so hopefully the lads have prepped well off the back of winning the trophy last week and that will give them a bit of confidence and extra wind in their sails. That carrot of what we can achieve this year should push them on to get a result.”