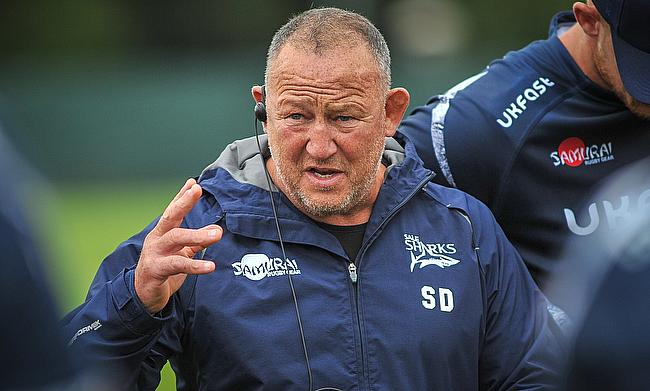 Sale Sharks return to second place after 24-17 win over Saracens
The Saracens stories have returned and they face another test of character without Owen Farrell
Rob Webber returns to Sale Sharks on short-term contract
Exclusive: Cameron Neild - Every Sale player knows we are pushing hard for home semi-final

Just win. These are two very simple words, but this weekend, claiming a victory will be the number one priority for the Gallagher Premiership’s top four hopefuls.

This season will of course be remembered for obvious reasons but as we approach the conclusion of this unprecedented campaign, the 2019/20 story is set for a thrilling climax.

With just three rounds remaining in the top-flight, the race to secure a play-off spot continues to intensify and the way this Sunday’s fixtures have fallen means prospective semi-final places could hinge on 80 minutes of rugby.

For Sale Sharks, they find themselves in the thick of the battle, but after losing to Harlequins and Exeter Chiefs in their first two games following the Premiership’s return, Steve Diamond and his side knew their top four aspirations were slowly slipping away.

Opportunistic ??@Simon_Hammers spotted the try at his mercy and took the chance as @SaleSharksRugby impressed against @Saracens ??

But that was then and this is now, and now the Sharks currently occupy second position in the table after stringing together fourth consecutive wins.

The Manchester-based club welcome Bath to the AJ Bell this weekend and the West Country outfit sit in fifth place, but they are only four points behind Sale.

Whilst Sunday’s clash in the North-West already holds great significance, 100 or so miles south, Wasps’ (4th) meeting with Bristol Bears (3rd) is of equal importance as both clubs are very much on the coattails of Sale.

“It has turned out to be fantastic really, hasn’t it?!” Sale boss Steve Diamond said on Friday. “I am not a neutral because I am in the fight, but for a season that could have been a damp squib, it has ended up with a lot of competition. Exeter are obviously firing above everyone else at the moment, but we are fighting. You have just got to win.”

Sale’s run of four straight victories does include key triumphs over Wasps and Bristol Bears, but most recently, Diamond’s charges defeated Saracens.

The champions, unsurprisingly, fielded a much-changed side on Wednesday evening with their Heineken Champions Cup quarter-final against Leinster on the horizon whilst Sale also rotated.

Despite the selection shake-ups, the Sharks exploded out of the blocks to score three tries inside the first 27 minutes and it looked as though it was a matter of when, not if, Sale would secure the bonus point.

However, Saracens’ character and resilience came to the fore again and Diamond’s side were denied a full house. With Bristol, Wasps and Bath all clinching maximum points, it looked like a missed opportunity for Sale in midweek, but their Director of Rugby sees it differently.

“Having had a couple of days to think about it, the way I move the positive around is this; We went to Harlequins first game after the lockdown and we were dreadful,” Diamond added.

“The only thing I said in the changing room afterwards was thank god we got a bonus point. I think that bonus point made up for the other night’s miss.

“It was always going to be a fairly equal contest and only a fool would go out and say we are going to get five points against Saracens. I thought four points is what we deserved out of it. I have been doing it too long to worry. We have just got to keep winning our next game.”

After making changes on Wednesday, Sale are expected to be fully-loaded at the weekend and Diamond hopes Tom Curry (head) and Akker van der Merwe (ankle) will be fit to face Bath.

However, the Sharks boss did reveal the extent of the injury sustained by World Cup winning second-row Lood de Jager. The Springbok bent the metal pins inserted into one of his shoulders against Leicester Tigers last weekend and his treatment is being assessed by a club specialist, as well as an expert over in South Africa who operated on the 27-year-old in 2019.

Diamond believes de Jager could still be involved for Sale this season if his recovery goes well, but admitted the lock could be out of action for three months.

“He has done some damage to the shoulder and we are seeing a specialist who is in liaison with a specialist in South Africa and that will determine the outcome.

"My limited knowledge is the operations that he has had have been massively successful and the amount of stress that went through that shoulder at the weekend was such that it bent the pins in his shoulder.

Diamond would clearly love to have de Jager at his disposal on Sunday against a Bath side who have used their forward pack to great affect throughout the course of this season.

Since the restart, Stuart Hooper’s side have overpowered teams with the likes of Beno Obano, Tom Dunn and Zach Mercer leading the charge and the performances from the Blue, Black and White have garnered five victories from their six matches.

After dismantling Worcester in midweek, Bath will be oozing confidence but Diamond is aware of the challenge which awaits his side.

Another win for the Blue, Black and White ??
Bonus-point secured 5?
Josh Matavesi's smile ??
A double from Elliott Stooke ??

Plenty to catch-up on from last nights game.#WeAreBath

He added: “I have only watched the last couple of games and they have obviously had a great restart. They have got some great wins under their belt and momentum is an important thing so we know it is going to be a really tough game and no tougher than the last six.

“If we don’t get parity [up front] then it is game over. What Stuart Hooper and Neal Hatley have done very well is got themselves a highly motivated team. That pack, whichever one they put out, is dominant. They have got two number 8’s who can play the ball as well as scrum-halves and they have got fantastic backs. It all bodes well for a good game of rugby if you are not involved!”

So, we all set for a pivotal weekend in the Gallagher Premiership. Lose to Bath on Sunday and it could be damaging for Sale, but a victory at the AJ Bell for the Sharks would represent another step towards a potential league title for the first time in 14 years.

Over the next month, the equation is simple for Sale: Just win.