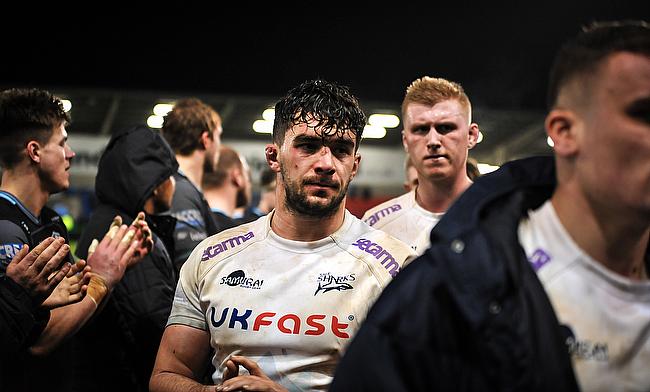 Exclusive: Bryan Byrne - We don’t have time to worry about others
Match Report: Wasps 11 – 20 Sale Sharks
Wasps aiming to tighten grip on top four spot against Sale Sharks
Josh Beaumont column: Tuilagi is definitely the biggest signing we have had since I’ve been at Sale

Sale Sharks were out to right some wrongs on Tuesday evening. Whilst a cluster of their top four rivals had begun the Gallagher Premiership restart by firing on all cylinders, the Manchester-based outfit were left licking their wounds after back-to-back defeats.

Any sense of optimism surrounding the AJ Bell looked as though it was beginning to disappear following Sale’s home loss to Exeter Chiefs last Friday, which prompted Director of Rugby Steve Diamond to say: “We’re out of the top four race unless we get ourselves together.”

Setbacks against Harlequins and the league leaders had raised question marks when it came to discussing Sale’s title aspirations, but their ambitions for this campaign were reignited in midweek following a solid 20-11 victory over fellow play-off candidates Wasps.

After their top four hopes looked fragile, the Sharks now have a spring in their step and the narrative for the rest of their season may well take another twist on Saturday when they face second-placed Bristol Bears.

Diamond has gone strong for the visit of Pat Lam’s side, but having selected his 'stars' such as Faf de Klerk and Manu Tuilagi in the opening two fixtures, Sale’s boss had no other option - due to the Premiership’s player welfare directives - than to rotate his squad when they took on Wasps earlier in the week.

In total, Diamond made 14 changes from the side that lined-up against Exeter and with a full-strength Wasps outfit named by Lee Blackett, Sale arrived at the Ricoh Arena as the underdogs. “Let’s be honest, not one of you lot sat in front of me now [over Zoom] thought we’d beat Wasps on Tuesday night?,” Diamond said to the media on Thursday.

He was correct, which is why Sale’s determination to get a result against a confident Wasps side was so impressive and the players who stepped in for Diamond also stepped up.

Included in his changes was back-row Cameron Neild. Tuesday evening was his first Premiership appearance since January and after suffering from a string of injuries, the forward played 77 minutes against Wasps - the highest amount of minutes he has accumulated in a single game for 18 months.

“It is honestly a real breath of fresh air being back again,” Neild exclusively told TRU. “I have been looking forward to getting back to how I was playing before my injuries.

“I missed pre-season before the start of last season so I was never fully fit, but through Covid, I have had the opportunity to pretty much get a full pre-season in and I feel really ready to go so whenever Dimes gives me the nod again, I’m looking forward to stepping up.”

With the likes of Neild, Matt Postlethwaite, Connor Doherty and Arron Reed all coming in for what rapidly became a crucial game for Sale on Tuesday, the spotlight was on the Sharks to deliver and Diamond’s side came to the fore.

“There was probably a built-up extra pressure towards the game because of our previous two results,” Neild continued. “A lot of people outside of Sale will have doubted us and looking at the team-sheets, a lot of people would have had Wasps as the favourites, but as a group, we kind of wanted to take it to them.

“Getting your basics like your scrum and your line-out right, which are the bolts of the game, were obviously essential and then the next thing was taking them on at the breakdown. I think we did those things and really kept our discipline too, which is obviously what helped us get the win in the end.”

“A non-superstar team did it for us if I am honest and that’s the way we like it,” Diamond added. “We have got eight/nine South African’s, but we have also got 35 English lads and most of them are from the area. When I put the call in to put us on the map, they put us back on the map."

Diamond heaped praise on his homegrown contingent in Thursday’s media session and the Manchester-born Neild firmly falls into that category after racking up over 100 appearances for Sale despite still only being 25-years-old.

His versatility to play in the back-row or at hooker is something which his Director of Rugby admires and on Tuesday evening, Neild was operating at blindside flanker alongside Ben Curry, who put in a man of the match display.

"Our depth gets questioned a lot, but the lads who came in today stepped up and did the club proud."

Captaincy is coming easy to Ben Curry, he reflects on Sale's win at Wasps. pic.twitter.com/7NBcKGC3qu

Whilst Sale’s local talent impressed up front, Luke James produced a commanding performance at full-back and Neild feels the mix between the international stars and the homegrown players at the club is the perfect balance.

“I think it obviously helps towards our game plan having homegrown players,” Neild said. “The desire we showed to go out and really fight for every inch was there and that was what we needed to do. I think having a mix is the best thing in a team so you have got to have that star quality as well as having the people who are happy to do the dog work.

“The mix should work beautifully so if the South African’s and whoever else get the headlines, then brilliant as long as Sale are being successful. That is all that matters at the end of the day.”

And any success which Sale are to achieve this season could be shaped by the outcome of their clash with Bristol on Saturday.

The Bears travel up to the AJ Bell on the back of a narrow 25-22 loss against table toppers Exeter and with the Chiefs now 11 points clear of the chasing pack, the focus on that second home semi-final place is intensifying.

If Sale were to be defeated this weekend, it could end their hopes of securing a play-off at the AJ Bell (where they have only lost two of their last 11 matches) but a victory on Saturday against a much-changed Bears side would see Diamond's men leapfrog the West Country outfit in their first of four remaining home games.

“Second vs third coming up on Saturday is going to be a hell of a game, isn’t it?” Neild added. “Even though Dimes doesn’t like to say it in the press, every player knows that we are pushing as hard as we can for that home semi-final and getting the win this weekend will be massive.

"For everyone who is watching at home who is supporting Sale Sharks, for all the lads playing, for all the staff, it is such a big game and everyone can’t wait to be a part of it.”

Bristol Bears are prepared to be ‘hunted’ says Pat Lam