'That email came in February and by the middle of March, I was living in Budapest' 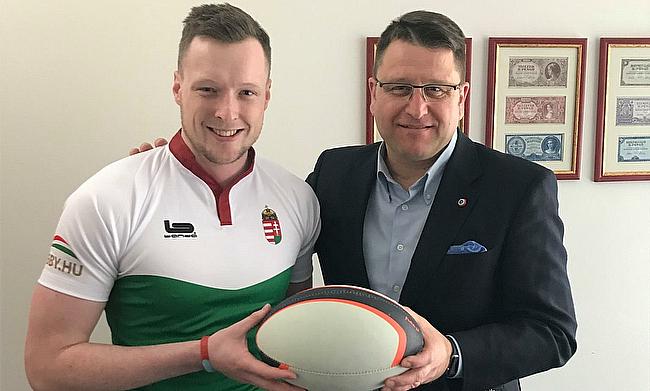 Craig Dods is currently the fly-half for Tennent’s National 1 side Kelso and while Scotland has always been home, Hungary now holds a special place in the 26-year-old’s heart.

Craig Dods was brought up in the Scottish Borders and learnt his rugby there, so how did the man from Gala end up as the Hungary Women’s Sevens coach?

“As a development officer and aspiring coach I am always looking for challenges and new projects to help me move my career forward and earlier in the year, an email from the Hungarian Rugby Union was forwarded on to me,” Craig told TRU.

“They were looking for a coach to work with the national women’s sevens team. That email came in February and by the middle of March, I was living in Budapest.

“It all happened really quickly because they needed someone to work with the wider squad ahead of the Rugby Europe Trophy events in the Ukraine and then in Hungary over the summer time.

“I had no expectations heading over there, I guess I thought rugby would not be that big, and when I turned up to the first training session I realised that the players were supplying all the balls and cones and what have you.

Preparations are over ahead of the Women 7s Trophy in #szeged Hungary. This is the Captains picture. Follow all the action tomorrow from 10:00am CET @ https://t.co/TQxdSnhv0V pic.twitter.com/AiTwK5rKEm

“I had to adapt to that situation in terms of my own coaching, but the girls were brilliant with me. A lot of the players come from a handball background so they have good footwork, acceleration and spatial awareness.

“There is not a massive player pool, but the wider group impressed me and we just worked as hard as we could together to make sure we were ready for the two Trophy events.

“The players are all amateur and made great sacrifices to be there and the pride they had in playing for their country was humbling and really amazing to see.

“We had players playing in Spain, Germany, Australia and in the Tyrrells Premier 15s in England so the main thing was trying to get time together as a squad and really build up our own culture and our own identity.”

The first tournament the team were a part of was in Dnipro in the Ukraine in June and that was followed up by the second leg in the south of their own country in July.

“Initially the aim was to make the top eight and avoid relegation after the two events, but we finished fifth in the first tournament and that gave the team quite a bit of belief,” Craig explained.

“We finished sixth in the second event which meant that we were fifth overall which was the best ever finish for the team.

“When I had first gone over I was really worried about the language barrier, but a lot of the girls spoke English and helped me get my message across and I think we did pretty well.

“For me as a coach this really was a great opportunity. It opened my eyes to a lot of different things and how to deal with different situations and I would simply say to any young, up-and-coming coach that if you get the chance to do something like this.

Bit of a review and preview for the @RugbyHungary girls before our next challenge tomorrow. We play 3 games in the Duna Grand Prix. Buzzing to step up our preparation. #HajraMagyarok pic.twitter.com/IJnGCpVUfx

“Go out of your comfort zone and see where it might take you, if you had said to me even last Christmas time that I would have coached an international sevens team by now I would have laughed.

“Now I have done something like this, hopefully other opportunities might come my way while it looks as if Hungary want me back for some camps later this year and then the tournaments in 2019.”

Still just 26, Craig grew up playing rugby at Gala. He progressed into the senior ranks with the Maroons and played a number of games for the first XV before he was offered a development officer job along the road at Kelso a couple of years ago.

“Things are going well at Kelso and we are just trying to get as many young boys and girls as we can from the catchment area playing the game,” he stated.

“It is really fun and I definitely think I have brought some new skills back from my time with Hungary that I can use when coaching just that bit closer to home.”

Craig also plays stand-off for the Kelso first XV and this Saturday, October 6 they are at home to GHA at Poynder Park.