‘It felt like there was someone pushing down on you’ – Haskell 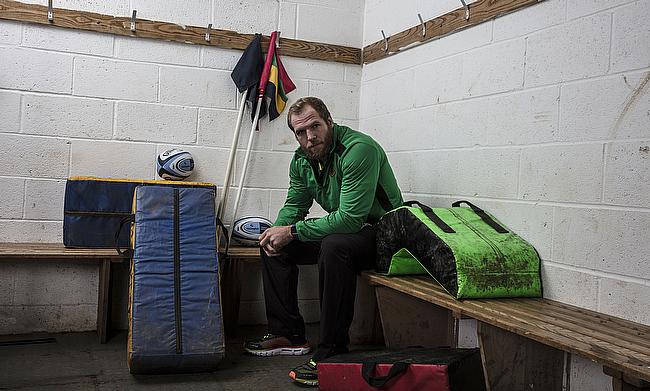 James Haskell was speaking at a Gallagher ‘Train with your Heroes’ session at Northampton Outlaws after the club won a nationwide competition launched by Gallagher.
©Pinnacle Photo Agency, Phil Mingo

“For me, they’ve been playing some of the best rugby that I’ve seen in a long time,” said James Haskell as he reflects on England’s blistering start to the Six Nations.

“Defensively they look very mighty, their physicality is next level from what it has been, and I think every player has put his hand up.

“The clever kicking game, showing the different tactical games to suit different teams, has been really sensational and Jonny May is having a try-fest that lots of people would be jealous of.”

Top of the Six Nations table after two games, England face Wales this weekend with both teams harbouring Grand Slam hopes after back to back victories to begin the championships.

Haskell knows the Principality well, making his debut there in 2007 and he has been involved in England’s last two victories against Warren Gatland’s side in Cardiff. The atmosphere inside the stadium is always highlighted when England travel to Wales and Haskell thinks it will be no different on Saturday evening.

"I think @EnglandRugby showed now they can go to a place under a lot of pressure and perform."@jameshaskell talks up England after their win against Ireland in the #GuinnessSixNations ??

“When I made my debut, everybody talks about international crowds and my only experience was the Premiership and age group stuff and, actually, you don’t hear the crowd,” said Haskell, who has been capped 77 times by his country.

“You only really hear them in big moments. Friends and family will say, ‘did you hear us cheering?’ and you always say yes, but you never did. The first time that I went down there [to the Principality Stadium], the roof was closed, and it was the most incredible noise. The loudest place that I have every been. It felt like there was someone pushing down on top of you.”

“It really became another element. I don’t think that a lot of people let the roof be closed anymore. I think it’s a great place, I love it, love Welsh rugby, love the Welsh fans. Although, I’m not sure they’re overly keen on me!”

Wales came into the competition as one of the favourites, having won all of their Autumn internationals and after equalling their longest ever winning streak, Haskell is certain that Warren Gatland’s side will be keen for this top of the table clash.

“Wales have got a few demons off their back by having an incredible Autumn,” said Haskell. They haven’t played as well as they would have wanted to [against France and Italy] and will be looking to kick on. It’s amazing how all the Welsh players seem to grow by 10-feet and get slightly quicker when they are coming to play England.

“They would absolutely love to beat us, and if they don’t do anything else, it would be mega. They’re a dangerous animal. They are well coached and the players that I got to know on the Lions tour are very, very talented.”

Due to an injury he picked up at the beginning of the season, Haskell has not been available to Eddie Jones and England, as well as Northampton Saints on the domestic front.

Haskell joined the Saints last summer and having played the entirety of his Premiership career for Wasps, he admits that since he joined Northampton, it has been a new experience.

Your Saints for Derby Day...

“I’d never been to a town-based team where everyone lives and breathes their rugby,” he added.

“When I was at Wasps, we were in and out of London and High Wycombe. We didn’t really have a home. We’d go to Twickenham and sell it out, but those fans wouldn’t follow us to Adams Park. But, at Saints, with Franklin’s Gardens, everyone in Northamptonshire loves the Saints.

“I think it’s a fantastic club and I didn’t really appreciate, before I came here, what a rich history that they have. We’ve got some great facilities, where we train, and Franklin’s Gardens is an incredible place to play.”

Joining Northampton as the club had its first major coaching change in 10 years, Haskell believes that Chris Boyd is the right man to take Northampton in the right direction: “He has obviously had a lot of success at the Hurricanes and he knows how he wants to play.

“He’s the right man to take Northampton forward. He puts a lot of faith in his coaches too. Sam Vesty, Phil Dowson, Matt Ferguson and Alan Dickens. They’ve all carried on growing in their roles and he’s making a good team over here.”

After just three games at his new club, Haskell suffered an ankle injury that required surgery, keeping the flanker out for 10 weeks. Returning for Northampton in their Premiership Rugby Cup semi-final against Leicester last month, Haskell is relieved to be back in action.

“It was very frustrating when at a new side, to get an injury after only three games. I, obviously, wanted to play more. This was a huge season for me, for many reasons. I’m glad to be back fit, I’ve missed out on selection for the past couple of weeks, but I have to bide my time. You’ve got to just wait for an opportunity and hopefully take it.”

James Haskell was speaking at a Gallagher ‘Train with your Heroes’ session at Northampton Outlaws after the club won a nationwide competition launched by Gallagher, a passionate community insurance broker and proud title partner of Premiership Rugby.