'Everyone is getting back onto our side' - Pisi 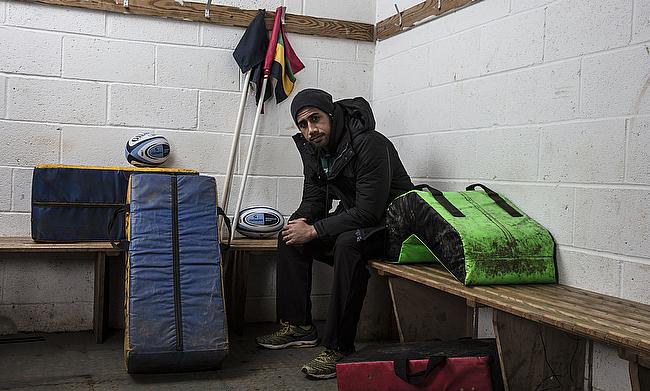 Ken Pisi was speaking at a Gallagher ‘Train with your Heroes’ session at Northampton Outlaws after the club won a nationwide competition launched by Gallagher.
©Pinnacle Photo Agency, Phil Mingo

“I was excited. I knew it was going to be a change. I was kind of worried about how the boys were going to react to his style, but they have adapted well. It has been really good.”

This is Ken Pisi’s seventh campaign with the Northampton Saints and the first season that Pisi has played under someone other than Jim Mallinder.

The Samoa international has experienced the heady heights of a Premiership win in 2014, as well as a Challenge Cup victory in the same year, but now Pisi and the Saints are going through a different chapter under Chris Boyd following a tough 2017/18 season.

“Last season wasn’t the greatest, but I think now, everyone is getting back onto our side and it’s good” said Pisi. “The loyal fans have always been there for us. There can be some bandwagon fans, like at every other team that’s doing well, but we’ll take their support and we’ll use it.

Pisi hasn’t been seen much in a Saints shirt so far this season under the stewardship of Boyd. A shoulder injury in September kept Pisi out until the club’s tie against Leicester Tigers in the semi-final of the Premiership Cup competition at the end of January. Playing for over 70 minutes on his return, Pisi was grateful to be back in action.

?? "The lungs were going, then the legs, then everything else!"

Great to see @kenpisi back and smiling after five months out ???? pic.twitter.com/lLiWTvIC3J

“It went well. I’m just trying to get back into that 23. It was probably my longest injury since I came up here to play in the UK. It was quite hard to take in initially. But I enjoyed being back out there with the brothers.”

Since Boyd took the reins at Franklin’s Gardens, many of the club’s academy players have featured which is something that Boyd set out to do on his first day with the Saints. Pisi added: “He said ‘I don’t care if you’re young or inexperienced. If you play well, then you’ll get an opportunity to play and play here all the time.’

“He said that from the start and players have been given the opportunity, especially [Ollie] Sleightholme and guys like that. It has been good for them. It’s a real challenge at the club at the moment, but it’s a positive challenge. It’s a case of, if they’re playing well, then we have to step up our game.”

With the final months of the season to come as Northampton look to impress in the Gallagher Premiership, European Challenge Cup and in the Premiership Rugby Cup final against Saracens, Pisi is also focused on gaining the recognition of the Samoa national team coaches as he sets his sights on his second Rugby World Cup: “I want to play for Samoa. If I can get a couple of games in, I can hopefully impress some of the coaches for World Cup selection.

After a big start to the #SixNations, worth reminding you it's 7 MONTHS AND 18 DAYS until #RWC2019

“The fact that we (Northampton) are still alive in three competitions, we get more game time. I’m looking forward to it and if I get given an opportunity, I’m going to take it. But, this is my last year with the Saints, so depending with what happens, if it is my last year, I want to make the most of it.”

Northampton will be facing off against a fifth placed Sale Sharks side, just three points ahead of Saints. Losing out by just five points in November, Pisi says that they can only try and better that performance this weekend.

“There were certain things that didn’t go too well for us. So, there are things that we’ll try to make better. Also, we’ll be highlighting key players for them. Just like any other team, they have danger and threats.”

Ken Pisi was speaking at a Gallagher ‘Train with your Heroes’ session at Northampton Outlaws after the club won a nationwide competition launched by Gallagher, a passionate community insurance broker and proud title partner of Premiership Rugby.