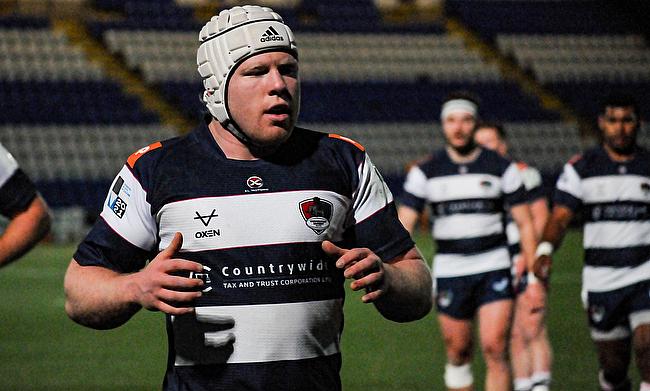 Quade Cooper to be part of Australia's European tour
Eddie Jones on the key “determiners of the game”
England to bid for 2025 Rugby World Cup
Greg Peterson Exclusive: Newcastle’s 'mercenary for hire' on Falcons' northern grit

The story of a young hooker coming from the southern hemisphere to stay in England and then getting called up to the national team is by no means a new one.

Much of the same could be said of Dylan Hartley when he made his way to Sussex to stay with his aunt and uncle some 20 years ago, before pulling on the shirts of Worcester, Northampton and then England.

Nic Dolly’s story follows a similar path, the 22-year-old staying with his grandparents in Manchester before catching the eye of the Sale Sharks Academy.

Going on to represent England U18 and U20, Dolly was unable to make an impact at the AJ Bell, spending time dual-registered with Rotherham Titans, Sale FC and Jersey Reds prior to being released in 2020.

With an impressive rugby CV, all that Dolly could do is look for a new club to play his rugby at in the new season. After an extensive search, the hooker chose Coventry as his next stop, linking up with his former England U20 coach James Scaysbrook at Butts Park Arena.

The West Midlanders have made a habit in recent years of nurturing talent before they have been able to make the step up to the Premiership.

James Stokes and Rory Jennings have made their way to London Irish, the latter stopping off at Clermont prior to a move to the capital, whilst Luke Wallace signed for Leicester Tigers before moving back to Harlequins.

“The shift at the club over the last couple of years is that we want to create an environment that we can benefit from two different kinds of recruitment pools,” Rowland Winter, Coventry’s Director of Rugby, said.

“They need a good playing programme in a full-time environment to polish them up for the club or to put them in a position where they can move on. Nic probably epitomises that exact model.

“There is probably hundreds of Nic’s every year that are coming out of Premiership academies, that are either 18 or 19 or that have been in a senior academy ad we want to make sure that we are in a position to offer them a good opportunity to progress.

“That is half the battle, the other half is having a player like Nic who was always so determined to take everything and to maximise every opportunity he got within the environment, and he definitely did that and worked his balls off to make sure he was in a great position, ready to go.”

Linking up with the Coventry squad in June 2020, Dolly spent plenty of time getting to know his new teammates. Good friends with current club captain Adam Peters, it took until the February of 2021 for the hooker to finally get back out onto the pitch.

Playing games against Bedford, Doncaster Knights and Ealing Trailfinders, it didn’t take long for the former age grade international to get recognition from elsewhere. What was instantly noticeable when watching the youngster was that he had worked hard on each aspect of his game and was benefitting as a result.

Scoring tries in each of his three games for Coventry, Phil Boulton says that Dolly added a different dimension to the way that the team played in that period.

“Nic’s work rate was brilliant,” Boulton said. “On the field, it was like playing with another back-row in there, and you can see that when he is playing for Tigers. He is getting out in those wider channels, with carries and popping up in the middle with the big tackles and stuff.

“I suppose his knowledge of his set piece was every improving here, and that is something that he worked really hard on. He got his nuts and bolts right and the rest of it fell into place afterwards.”

It is clear to see that Coventry and Leicester have a good relationship, with Dan Richardson and Sam Aspland-Robinson currently dual-registered from Mattioli Woods Welford Road to Butts Park.

So, when Steve Borthwick and Tigers came calling for Dolly’s services, Winter believes that it was the 22-year-old’s hard work following the disappointment of his release from Sale that allowed him the chance in the Premiership again.

“We had a five or six month preseason where he worked so hard and was so diligent in every area of his game, that you could see that there was someone really hungry to improve and just wanted an opportunity,” Winter said.

“Throughout the preseason and those three games that he had with us, he impressed and impressed off the back of what he had done. Players develop at different speeds and in different ways. He had obviously taken his knockbacks that he had across time and taken that feedback, improved, and put himself in a great position to be looked at.

“Leicester have been open and transparent with what they have done, and that they were looking at him for a good six or seven weeks before they needed him.”

Just making two appearances from the bench to close out a sixth-place finish for Leicester in the 2020/21 season, since the start of the new season Dolly has been present in each of Borthwick’s matchday squads this season, starting four games and coming off the bench for the last two.

Scoring five tries so far this season, Leicester currently top the Premiership and Dolly’s efforts have been recognised by Eddie Jones.

Now vying for a place in the England squad for the Autumn Nations Series games against Tonga, Australia, and South Africa, it is likely that it will be between him and Jamie Blamire for a place on the bench, with the vast experience of Jamie George likely to take the starting spot.

Whilst Coventry will be on the road to Cornish Pirates this weekend, Dolly will have been on familiar territory in Jersey, competing for his first England cap. Now watching on from afar, the 22-year-old’s former Director of Rugby is hoping that England will give the hooker a chance, much like he did.

“Naturally, you keep an eye on Nic,” Winter said. “You hope that he is going well, and there have been lots of the boys keeping in contact with him. I think he has definitely got bigger; we knew he was getting bigger and stronger, more accustomed to the Premiership and that has served him well.

“But he has got an eye for the try line and he is a hard worker, and he has got the perfect balance between mixing those elements of being one of the boys, being a team player and he is determined.