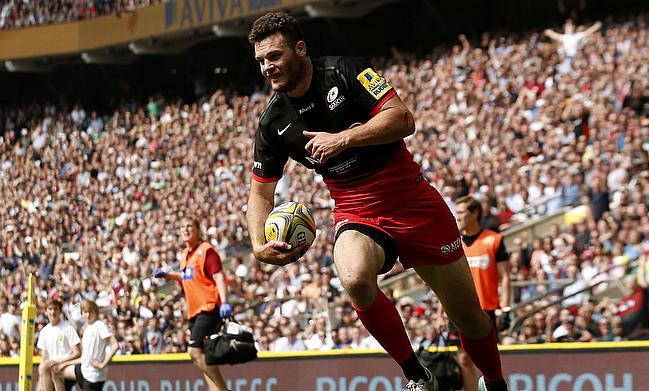 After missing out on the 2015 World Cup, Duncan Taylor is hoping to make it to Japan
©PA

'Fantastic ambassador' Matt Fagerson stays grounded with possible World Cup debut on the horizon
Jamie Bhatti's rugby journey is an inspirational tale as World Cup comes into view
Scotland international Ross Ford announces retirement
Brown: Not many people focus on ‘the other side’ of rugby

Scotland assistant coach Mike Blair has been heartened by the sight of key man Duncan Taylor being back in training with the national team squad over the summer - and he cannot wait to see the versatile Saracens back out on the pitch again.

This week, the extended 44-man Scottish squad have been back in training at Oriam on the outskirts of Edinburgh following a two-week break.

They are now into their second block of training ahead of matches home and away against France and Georgia in August and early September.

During that run of games, head coach Gregor Townsend will select the 31-man squad that will travel to the showpiece event in Asia.

Taylor missed out on the 2015 World Cup due to injury and has not played for his country since 2017, but he is back in the mix.

?? The Scotland squad returned for block two of pre-season preparations this week.

First up was a day of testing to reassess the group before getting back to the hard work of speed, skill and units #AsOne pic.twitter.com/sLbzxPtevs

“Duncan is feeling good, he has been excellent in camp so far,” Blair told TRU about the 29-year-old who ruptured both his anterior and posterior cruciate ligaments last September.

“He trained the last three or four weeks of the season with Saracens and there was even some chat that if Brad Barritt had not got through his [hamstring] injury before the Premiership final then Duncan would have potentially dropped straight in.

“That is how highly he is regarded at Saracens and when he has come back up with us, he has been excellent and trained really well.

“He has a great way about him. He does not say too much, but he has that voice that you want to listen to, if he has an opinion on something it is often stronger from him than from a coach. It is brilliant to have him back”.

Meanwhile, it may be a whole different ball game, but with Liverpool coming to Scotland this weekend Blair wants his players to learn from Jurgen Klopp’s men.

This Sunday, UEFA Champions League reigning champions Liverpool are in Edinburgh to take on Italian side Napoli in a friendly match at BT Murrayfield.

Townsend is keen to attend with his coaching staff if they can and Blair, the former scrum-half who earned 85 caps for his country and toured with the British & Irish Lions, has a lot of admiration for Klopp’s star-studded squad.

Blair admits he keenly studies other elite sporting environments to try and learn tips that may give the Scotland squad an edge heading into the World Cup which begins in September in Japan.

And he pinpoints the quickly taken corner by Trent Alexander-Arnold which led to a Divock Origi goal in the 4-0 win over Barcelona in May as the type of quick-thinking Scotland’s rugby players can learn from going forward.

“I have not heard the update, but there was chat about going to the game on Sunday,” Blair said.

“Learning from other teams is really important. There is an example from Liverpool when they took a quick corner, that kind of stuff can translate into what we do.

“From a defensive point of view, we are about always being switched on and never turning your back while from an attacking point of view, you are trying to create opportunities where you are against unstructured defences.

“The young guys bring the fearlessness, the energy and the exuberance to the group, you need to harness that.”

Blair believes that the current Scotland squad can beat any team in the world when they play at their best, but has warned that the gap between their top showings and their bad days needs to significantly narrow heading into the World Cup.

They also bounced back amazingly from 31-0 down to draw 38-38 with England at Twickenham four months ago, but when they have not been on form, the level of performance has dropped drastically.

“There are things we need to get right, but if we are able to put exactly what we want on the pitch, we have a chance of being able to beat anyone in the world.

“Consistency is absolutely crucial for us. Throughout the Six Nations earlier this year we had some moments of brilliance. There were long periods when we were all over the opposition - 30, 40 or 60 minutes in the Italian game for example [Scotland eventually won 33-20].

“But we’ve also had periods in games where we’ve almost fallen off a cliff. That last 20 against Italy and the first half against England, for example.

“That consistency of performance is something that we as coaches have been focusing on and trying to get that message across to the players.

“Everyone is talking about the Ireland game at the World Cup and, yes, first up, all eyes will be on that one, but we’re also aware that if we don’t play to the best of our ability in the other games then they are potential banana skins.”