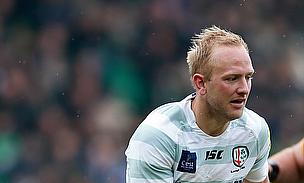 Zebre won their first European match at the 14th time of asking as they beat Brive 26-21 while there were also European Rugby Challenge Cup wins this evening for London Irish, La Rochelle, Newcastle and Edinburgh.

Zebre condemned Brive to their second Pool Five loss in eight days, converting a 13-7 half-time lead into a 26-21 overall success at Stade Amédée-Domenech.

In Pool One, London Irish beat Grenoble 25-15, making the home side rue a first-half yellow card for Daniel Killion.

Leading 17-9 at the break, London Irish made it two wins from two, Fergus Mulchrone, Halana Aulika, Alex Lewington and Luke Narraway crossing for the Aviva Premiership side as they claimed a bonus point.

La Rochelle beat Bayonne 25-13 in the all-French clash in Pool Two, holding off a comeback from the away side after racing into a 15-3 lead at the break.

Newcastle came from behind to beat Newport-Gwent Dragons 30-26, winning the battle between the two Pool Three leaders.

Trailing 20-13 at the break, tries in the second half from Mark Wilson and Will Witty handed them the lead and despite the best efforts of the Welsh side in front of their supporters at Rodney Parade, Newcastle held on.

Edinburgh followed up their impressive win over Bordeaux-Begles last week with a 25-17 win over Lyon.

The were 22-7 ahead at half-time but had to resist as Lyon had the better of the second half, but eventually an early try from Jack Cuthbert and 20 points from the boot of Tom Heathcote were enough.

That leaves them sitting pretty at the top of Pool Four.