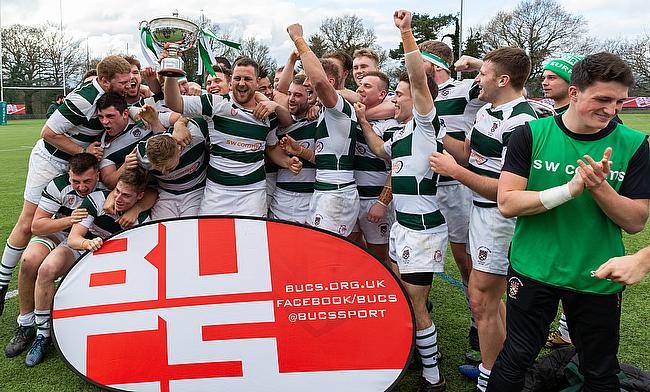 Cardiff University 'stand to reap the rewards', says Davies
Bath’s Tom Dunn: ‘My advice would be to grab university rugby by both hands and run with it’
University of Bath topple Exeter to send title race to the wire
How St Mary's University and Old Elthamians are paving the way for the future

The University of Exeter were crowned the BUCS Super Rugby domestic champions for the second year running as they secured the win they required against Cardiff University.

It looked as though Keith Fleming’s side would be in for a tense afternoon as Cardiff went toe-to-toe with Exeter in the first-half at Topsham.

But the complexion of the game changed in the second period as Exeter stormed to victory to clinch consecutive league titles.

After recent defeats against Durham and Bath, it was third time lucky for Exeter and the celebrations at full-time highlighted how much it meant to the Green and Whites.

Exeter can now set their sights on the BUCS Super Rugby Championship play-offs which begin in two weeks’ time as they aim to reach the final at Twickenham on 10 April.

As for Cardiff, they have secured their place in the Championship play-offs despite this defeat as rivals Loughborough University lost to the University of Bath.

The battle for a top four finish and a home quarter-final rages on after Cardiff Met defeated Durham University and….on Friday night in Kingston Park, while down at the bottom, Nottingham Trent University will contest the BUCS Super Rugby relegation play-off after losing heavily to Hartpury University.

Below is a full review from BUCS Super Rugby, plus, we round-up this weeks’ results from the top university rugby divisions and cups.

Both sides swapped scores in the first period as efforts from Jack Rouse and Paul Schroter were both matched by Cardiff’s George Williams, but the hosts held a slender 14-12 lead at half-time.

Exeter’s Sal M’Boge dotted down at the beginning of the second 40 and Cardiff were able to stay in touch as James Davies nudged over a penalty.

However, Exeter surged ahead as Will Hollis, Rouse and Andy Hamilton touched down for match-clinching scores.

Adam Sabri did cross late on for Cardiff, but victory for Exeter at Topsham sealed back to back league titles.

University of Exeter Director of Rugby Keith Fleming speaking to Sportsbeat’s Nicola Denton: “They were much improved today and we’ve been stumbling for a couple of weeks now. We were really lacking in our performance [after recent defeats against Durham and Bath] but we got the reaction we wanted today, and it was a better performance.

“It’s not by accident we’ve been at the top of the table. The boys have worked hard all season. It was frustrating that we didn’t win it a couple of weeks ago when we could have done, but to go back to back league champions just shows that we’re getting something right and our consistency of performance is so important.”

Jack Rouse speaking to Sportsbeat’s Bradley West, Sportsbeat: “Obviously, we’ve had a couple of slip-ups the last couple of weeks and we knew that today was basically down to heart and determination.

“It was our last league game and it was how much we all wanted it really. I feel the boys came out there, especially in the second half and got the win.

“We want to get to Twickenham and win the whole thing, that’s why we play rugby and that’s why you get involved and play for EURFC. You’ve got to take every game as it come. You can’t look too far ahead. It’s a quarter final and we won’t look any further than that yet.”

The University of Bath beat Loughborough University to end the Midlands club’s hopes of finishing in the BUCS Super Rugby Championship play-offs.

All of the points came in the first period as James Catlin, Chris Barry and Will Partington dotted down for the Blue and Golds, who have now won five games on the trot.

James Spencer crossed for Loughborough, but they were unable to add to their total which means Nathan Smith’s side have missed out on a top eight finish in BUCS Super Rugby.

In terms of Bath, they will have to wait to find out if they will finish second or third as Hartpury can still sneak into the top two if they clinch a victory from their game in hand against Nottingham Trent next week.

Team Bath 1st XV coach Mark Lilley told the club website: “There were tough conditions out there but I thought our intent to play was outstanding and we showed some really good attacking moments, so I was quite pleased with the performance all things considered.

“We had opportunities in the second half to get the bonus point and there were inaccuracies in our play that we will work on. We have been really pleased with how we have developed and moved our game on over the season and we still feel we have a lot more in the tank.”

Nottingham Trent University will contest the BUCS Super Rugby relegation play-off as Hartpury eased to a win in Gloucestershire.

Hartpury struck early when Will Biggs scored, but Trent, who needed to win to avoid finishing bottom of the table, were able to hit back with a try and a penalty of their own.

Trent extended their lead to 15-7 just before the break, but there was still time for Hartpury to reduce the arrears as Ervin Muric darted over.

That’s full time! A much improved performance in the second half from Hartpury sees them take the 5 points.

We travel to Nottingham next week to finish off the league.

However, it was all about the current BUCS Super Rugby Championship holders as Hartpury were rampant in the second-half.

Thomas Everard, Robbie Smith (2), Jack Johnson and Harry Wilson all touched down for the home side, who still have the chance to claim second spot when Hartpury visit Trent again next week.

Cardiff Met University came from behind to beat Durham University to enhance their chances of claiming a home quarter-final in the BUCS Super Rugby Championship play-offs.

A try from a rolling maul put the home side into a 7-0 lead at the interval.

Myles Rawstron-Rudd swapped penalties with his opposite number and the Durham man was on target again to make it 13-3.

But Met rallied and a score, plus a penalty try, guided them to a first victory since December 12th and Danny Milton’s men are currently in fourth place, but Durham or Leeds Beckett could snatch it away from them with a positive result next week.

Leeds Beckett University strecthed their unbeaten run to eight matches as they clinched a hard-fought win over Northumbria University.

Five penalties from Kieran Davies proved to be the difference as Beckett moved up to fifth place, with one game in their domestic season to come.

Beckett maintain their win streak here in tough conditions - cheers for the game lads and all the best for the rest of the season!@NorthumbriaMRU 10@LeedsBeckettRFC 15#BUCSSuperRugby

Kerry Wood's side face Durham next week and a victory for Beckett would see them secure a top four finish and a home quarter-final in the BUCS Championship play-offs.

As for Northumbria, they scored the only try of the game through Josh Bragman and the fly-half also landed a penalty for the hosts. Darren Fearn's side have finished seventh in the table and will face either Bath or Hartpury in the quarter-finals.

In the only game in Premier South this week, newly crowned champions the University of Exeter finished the league season off in style. They beat the University of Bristol 29-19 to secure their 10th successive win of the season and Jo Yapp’s side have actually won their last 22 games – a run which stretches back to October 2017.

North A champions and BUCS Super Rugby play-off contenders Newcastle University are out of the BUCS Vase competition. They were beaten by the University of Bristol 21-7 at home and it will be an all-South A affair in the semi-finals.

The semi-final ties will be played on March 13th with the final taking place two weeks later at Nottingham.

Manchester are still in title race as they sit four points off the top with two matches to go in their season. Elsewhere in the league, fifth placed the University of Strathclyde won 32-17 against Leeds Beckett 3rds and Durham 3rds picked up a crucial 24-15 victory against the University of Stirling as both sides look to avoid relegation.

The University of Aberdeen have won Scottish 1A after comfortably beating Edinburgh 38-0. Aberdeen, who triumphed in six of their 10 domestic games, will now compete alongside the winners of Northern 1A and Midlands 1A champions the University of Leicester for a place in the second tier of BUCS Rugby Union.

There was only one fixture in Northern 3A this week as Bangor University secured their fifth and final win of the campaign as they thrashed Edge Hill University 42-5.

In 3B, York 2nds beat the University of Huddersfield to finish their season on a high.

Warwick 2nds took a huge step towards safety in Midlands 2A after beating rivals Birmingham 3rds 29-13. Warwick now have Birmingham in their sights and a win next week over second-placed Nottingham 3rds would see them move out of the relegation spot.

The University of Glasgow and Hartpury 3rds will contest the BUCS Trophy final at the end of March after their last four victories on Wednesday. North B’s Glasgow narrowly beat Exeter 3rds 19-17 while Hartpury 3rds won 20-13 against a valiant Manchester Met side.

Northumbria 2nds clinched the double as they beat the University of York 25-24 in a pulsating BUCS Northern Conference Cup final at Sheffield Hallam. Northumbria won the Northern 2B title earlier this year and will be adding another piece of silverware to the cabinet in the North-East.