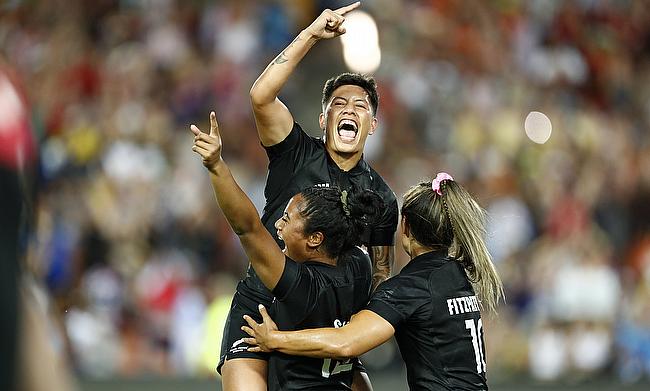 Last weekend in Hamilton, we saw New Zealand’s men and women win their home legs of the World Series, helping to consolidate both teams at the top of their respective competitions.

But now, a week on, the All Blacks will be hoping to keep up their good form with strong performances in Sydney. HSBC World Series commentator, and former USA captain, Dallen Stanford was impressed by what he saw last weekend.

“What a proud moment it was for all New Zealanders when both their women and men’s sides gathered on the podium to celebrate gold!” Stanford said.

“It’s not something many countries will experience and for the Kiwis, it has just happened back-to-back. Both squads have such chemistry, talent and competitive spirit that makes it so difficult to match up against them.”

After winning on in their own backyard, New Zealand take top spot in Pool A in Sydney. Their dominant performance in Hamilton was quite simply breathtaking, and it is so clear that this side is keen for a gold medal at the Olympics

Despite being so ahead of the pack in the Series standings, the rest of Pool A is a bit of a minefield. Wales come in as the lowest seeded side, just below a disappointing Fiji outfit and a Kenya team that has quite simply grown in stature throughout this season.

Who's the better paddle boarder, KT or Maloney?

Find out on the 'That Sevens Show' later today. It's a ripper!#That7sShow pic.twitter.com/KDUXH5xI60

“Kenya honestly has been the surprise of the season for me,” Stanford said. “Once the tournament format returns to having quarter-finals, I expect them to consistently finish inside the top eight and for a couple events inside the top four. Their demolition of South Africa in Hamilton was remarkable!”

In Pool B, France take the top seed after finishing as the runners-up in New Zealand. A side that hasn’t yet qualified for the 2020 Olympics, the French have set out their stall effectively so far this season, even if their performances haven’t always been the strongest.

“The French had a very interesting tournament (in Hamilton) and didn’t play particularly well in the pool stages, just beating Spain by four points and drawing 12-12 with Canada,” Stanford said.

“That said, they defeated a very strong England side and are now tied second on the World Series. The main reason for their success this year is that they are second to New Zealand for tackle completion and also second for restarts retained. This momentum is brilliant ahead of their Olympic qualifier and excellent for the sport having a flamboyant France on fire.”

Pool C contains the home nation, Australia. The hosts did well in Hamilton, finishing third overall despite some difficulties early on. Placed with Japan, Scotland and the USA, this could be one of the easier pools to escape from given those sides’ early season form.

“Mike Friday’s USA Eagles will be under pressure to perform, not only in Sydney, but in Los Angeles,” added Stanford.

“Expectations have risen to new heights after the best ever American finish on the World Series last season. It is a game of fine margins, especially when it’s the most competitive season to date.

“Not one person would have predicted that last years’ top two sides in Fiji and USA would be in seventh and eighth this year. It’s like jumping out of a third story building and landing on your feet without injuring yourself or spilling your beer!”

England take top spot in Pool D after their fourth-place finish in Hamilton. Losing to Australia in the bronze medal match, James Rodwell’s side recovered from an ugly tenth place finish in Cape Town. With a new coaching staff and with the return of several senior players, England look like they could be on an upwards curve.

“Over the years, England has consistently competed for the top six spots.” Stanford said. “They possess the best attacking strike rate of any team this season and should cruise into the semi-finals in Sydney. It’s only a matter of time until we see them celebrating with the fireworks post tournament.”

England do have a fairly strong pool to escape from, though. Grouped with the Canada, Ireland and Spain, they are all strong opponents so England will have to be at their best to enjoy a good tournament in Australia.

England have the unenviable task of being pooled alongside New Zealand, Russia and Japan in Pool A. Coming up against the Series leaders will be a tough test for Charlie Hayter’s side, even if the team does look far more settled than it did earlier this season.

Pool B throws up a very interesting fixture. Finishing second in Hamilton, Canada lead the pool as the top seed. Their closest opponent is their near geographic rival, USA. Fiji and Brazil make up the rest of Pool B, but Stanford believes all eyes are on the North Americans.

After falling just short of gold in Hamilton, we caught up with the @RugbyCanada team in Sydney to see how they use days off to destress from the pressure of playing sevens at the highest level.

“Canada have improved as the season has progressed and it will be an enthralling match up against the USA, with their last meeting providing a one-point victory for the Canadians. Whoever can avoid the Black Fern 7s in the knockout rounds, could reach the podium again this weekend.”

Pool C is made up by France, who were extremely strong performers, like their male counterparts, in Hamilton and could potentially cause an upset in Australia, even if they are pooled with the hosts, Ireland and Spain.