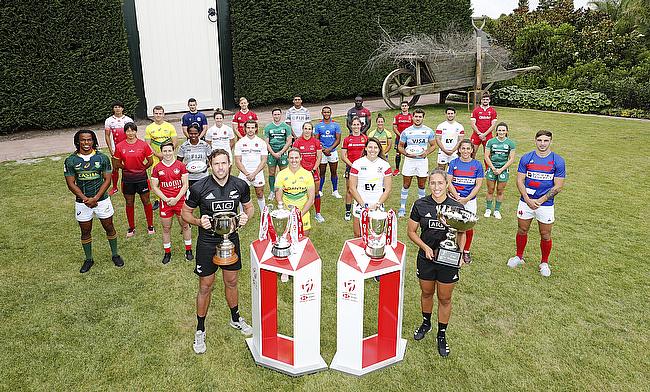 In the first leg of the Series in 2020, the men’s and women’s competition will resume this weekend in Hamilton before heading to Sydney at the start of February.

Pool A is headed up by hosts New Zealand, who raced to victory in Cape Town by narrowly beating South Africa to level the scores at the head of the World Series table. Commentator and former USA captain Dallen Stanford has been impressed by what he has seen from the Kiwis so far.

“South Africa put on one of the best defensive displays we have seen in a while, keeping New Zealand to zero in the United Arab Emirates, but seven days later, it was the All Black 7s who prevented the Blitzboks from breaching their line on several attempts,” Stanford said.

“What is telling is that this New Zealand squad is improving from game to game, with a similar looking squad for Hamilton, and for me they will be the ones to beat. The Blitzboks have made seven changes, some through Super Rugby commitments, some through injury and it will be interesting to see how they adapt.”

Special mention to our amazing liaison officer @mikepopata in his 15th and final year with the team!#hamilton #nz #rugbysevens pic.twitter.com/qNjjZ5Ucr9

New Zealand are placed alongside an impressive Scotland team, a USA outfit that is going to be much improved due to the return of their Rugby World Cup stars and Wales, who are struggling to establish any sort of consistent form this season.

“The USA will be much improved with Ben Pinkelman back in the forwards and Martin Iosefo in the midfield,” Stanford said.

“Still missing is the general of the side, Folau Niua, who reminds me of the great Ben Gollings. Unfortunately, the tournament format is not in their favour, especially with the Series leaders in their pool.”

England are in Pool B. Having performed poorly in South Africa, the side is now being coached by James Rodwell, a World Series legend, as Simon Amor has taken a lead role with England’s senior side.

Rodwell’s first team has not been easy to select, with injuries causing problems for England once again. He has been able to recall Tom Mitchell to his maiden squad, but Richard De Carpentier and Tom Emery are both unavailable and will be big misses in a pool that also contains South Africa, a resurgent Kenya and Olympic hosts Japan.

France head the pack in Pool C. The nation is currently the highest ranked European side on the World Series after a sixth-place finish in Dubai and placing third in Cape Town, leaving them in the bronze medal position overall.

“France is the only country in my opinion that hasn’t performed to their potential on the Series,” Stanford said. “They have finished 10th or worse in nine of the past 12 seasons. The key for them of course is consistency, both in squad selection and on field performance.

“It’s a very exciting few months though for French 7s and I expect them to face Samoa in the 2020 final Olympic qualification tournament. Just don’t ask me to pick the winner!”

Arguably in the toughest pool at the tournament, France have been drawn with an Ireland team that is impressing on their first season as a regular fixture on the series whilst they will also take on Canada and Spain.

Pool D is headed up by Fiji and it also contains an Argentina side that has improved dramatically in recent months.

Australia, who have not been firing so far this season, are also included in Pool D, however they could fancy their chances of experiencing a positive tournament in Hamilton as Samoa are the final team in their group. The Islanders saw their performances drop off in South Africa after an extremely promising fourth place finish in Dubai so they will be keen to bounce back this weekend.

In the women’s competition, things are clearer. After a third-place finish in Glendale, New Zealand have won the last two legs of the Series and come into their home tournament six points ahead of near rivals Australia.

As a result of winning in Cape Town, New Zealand head up Pool A, which includes Fiji, England and China.

The hosts clearly have the best form coming into the tournament, but Fiji performed extremely well in South Africa. An injury ravaged England are hoping to do something special in Hamilton this weekend whilst this will be China’s first appearance in this season’s Series.

In Pool B, Australia will be looking to cause an upset in New Zealand’s backyard by winning in Waikato. Drawn against a strong USA team, Russia and Brazil, it will be a tough test for the Aussies, but they will back themselves.

Following a strong showing in South Africa, Canada top Pool C with France, Spain and Ireland ranked below them. As the most dominant team in this group, it would be fair to suggest that Canada are favourites to progress, but the Europeans could all cause spring a surprise.