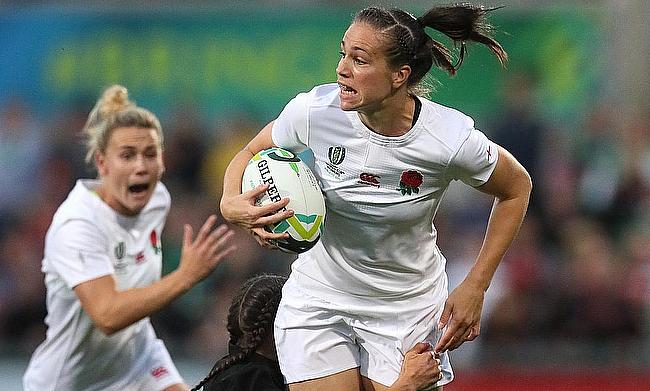 Jess Breach Exclusive: “Having time on the ball allows me to do what I like to do best
Harrison and Rowland duel will be key battle in World Cup year
Katy Daley-Mclean 'one of the greats' as Red Roses legend announces international retirement
Exclusive: England star Shaunagh Brown champions the rise of female referees

Welcome to a World Cup year. 2021 will hopefully take the Women’s Rugby World Cup south of the Equator for the first time, with defending champions New Zealand ready to defend their crown on home soil. Assuming, of course, we get to that point…

A year of such hope for women’s rugby has begun promisingly with the news that the Premier 15s will continue even as England goes back into lockdown, though doubts remain about the lack of equivalent testing to the men’s game in an elite league, and whether the competition will be able to cope as cases continue to surge.

Concerns are also growing about the status of the World Cup; windows for qualifying fixtures are narrowing, and though there is an endeavour from most to ensure the tournament goes ahead, ensuring that it is played at as high a standard, as fairly and with the atmosphere and support it deserves is also paramount.

Plenty will happen in the next nine months or so. Injuries will, unfortunately, strike, while the workloads and demands of those targeting both the Tokyo Olympic Sevens and the World Cup have not yet fully become clear. Opportunities for international fixtures will be limited even if the tournament goes ahead, with the status of the Women’s Six Nations remaining unclear and other international fixtures likely to be logistically difficult.

But let us begin the New Year with optimism, for now at least, and a speculative fool’s errand that will almost certainly be proven very, very incorrect. With the squad size upped slightly since last time around and domestic rugby better and more competitive than ever, here is what Simon Middleton’s 30-player England squad to travel to New Zealand could look like, as well as some of the potential contenders who just missed out:

This trio nearly picks itself. With Davies excelling at Loughborough this season and Cokayne similarly enterprising as part of a strong set of forwards at Harlequins, each is a worthy contender for the starting hooker’s shirt.

"Girls can focus on being at university & being a professional rugby player at the same time."

Kerr will push them as the third travelling hooker after a disrupted season at new club Wasps, though May Campbell’s try-scoring form and set-piece accuracy at Saracens could bring her into contention.

The other option would be to travel with only two hookers and utilise Vicky Fleetwood’s versatility as cover, though that may be a gamble not worth risking with a slightly expanded squad.

Five props, four of them close to certainties, fitness permitting. Both Hannah Botterman and Sarah Bern missed games for England in 2020, with Botterman hopefully back soon from surgery on her ankle, but on the pitch the duo’s carrying prowess both in tight and in open space give the Red Roses a real point of difference. The Harlequins pair of Cornborough and Brown provide more than able competition and back-up.

The identity of the fifth prop may hinge on fitness and form, but Loughborough’s Detysha Harper possesses a complete skillset and is growing into an increasingly impressive young player in all facets. Though Botterman has played tighthead for England in the past, Harper’s ability to cover both sides is also a plus, meaning she may edge out Ellena Perry, who is back to her best at Gloucester-Hartpury and had a good cameo from the bench against France at Twickenham, and the experience of Laura Keates. Bryony Cleall will hope to push her case when fit, too.

The second-row group is tough to decipher. With the do-all dominance of Poppy Cleall an option, and others capable of covering, Simon Middleton may go a lock light and opt to take an extra body elsewhere.

Aldcroft and Ward shape as England’s top two, and Middleton may be keen to see them as a pairing before the World Cup after a frustrating 2020 which saw injuries prevent them from appearing in partnership. Talling is the coming force, who very much fits the mould of a back-five forward in this England side – physical, versatile and relentless, there is plenty to like about the hard-tackling youngster, who can also play in the back row.

Talling’s Loughborough teammate Cath O’Donnell is yet to play this season after an extended injury lay-off, but would likely be chief among the contenders to displace this trio if fit.

England’s back row is stacked with options, of different archetypes and of players at different stages in their careers. Assuming Hunter recovers from the neural issue in her hand, her captaincy from number eight becomes even more vital after Katy Daley-Mclean’s retirement. Packer has been one of the standouts in the Premier 15s this year after her own injury and might be the favourite to start on the openside, while Cleall has been described by coach Middleton as someone who “could be one of the best players at the World Cup” – high praise indeed for the versatile Saracen.

Watch O2 Inside Line: Red Roses to see how the squad produced a huge away win against France, meet some of the new faces and see what @SEBeckett got up to on Player Cam ?? ??

Beckett is the fourth certainty after starting all but one game in 2020 at six or eight, and then Fleetwood’s experience, nous, athleticism and ability over the ball adds real value. That means that there is, unfortunately, likely to be no place for the similarly-skilled Amelia Harper, whose time will surely come. Returning last year after 22 months out rehabbing her ACL, the reliable Millar-Mills adds another potential lock option and yet more experience. Alex Matthews just misses out.

Harlequins’ Emily Robinson trained with the Red Roses in September and has stood out for the Premier 15s leaders this year, which is no mean feat, but may find forcing her way into the squad for the World Cup tough due to England’s remarkable depth in the back row.

Scrum-half is slightly more straight forward. Riley and Hunt are seasoned international performers of real quality, while MacDonald has been particularly sharp for Giselle Mather’s Wasps this season. Having been utilised on the wing on a couple of occasions, including against France in the autumn, Middleton highlighted MacDonald’s ability to play both positions to a high standard. That is a real positive looking ahead to the World Cup.

The decision on who replaces Katy Daley-Mclean at fly-half will be key for England in 2021, though there is a strong possibility Harrison starts outside of Rowland as a 10-12 axis.

"Entering 2021, who succeeds Katy Daley-Mclean is by far the Red Roses’ biggest question to answer."

The duel between @zoeharrison123 & @HelenaRowland99 for the No.10 shirt will be a battle worth watching in a World Cup year.

The inclusion of a third ten/utility back in Scott thus makes sense. Scott can play in the centres, or at full-back where she has impressed for England before, including two starts in last year’s Six Nations. Rowland’s fellow sevens star Meg Jones may be considered, too.

Taking only two centres would be something of a gamble, potentially leaving England a player light in midfield. Lagi Tuima would be the likeliest third at this moment, with the Harlequins 13 showing some of her best form recently as another who has overcome a long-term injury. Yet, as touched on above, the presence of Harrison and Scott may enable Middleton to take only two. Reed’s solidity, understanding with Scarratt and well-rounded game make her a very useful option.

Scarratt’s inclusion requires no explanation. England’s vice-captain might be their most important player.

Another area where England possess outstanding depth. Narrowing the travelling outside back party down to just five names is very, very tough, and one of these may drop off if Middleton favours an extra midfield resource with MacDonald and Scott as back three cover. Still, Kildunne has the ability to potentially fill in at 13, and all five of these players (along with a couple of others) would be more than worthy travellers.

Having started all but one of England’s games in 2019, McKenna is the likeliest starter at full-back, but the emergence of Kildunne means it is no certainty. On the wing, pick your poison: Breach, Dow or Thompson (or Kildunne, or Kelly Smith, or Lotte Clapp, or…)