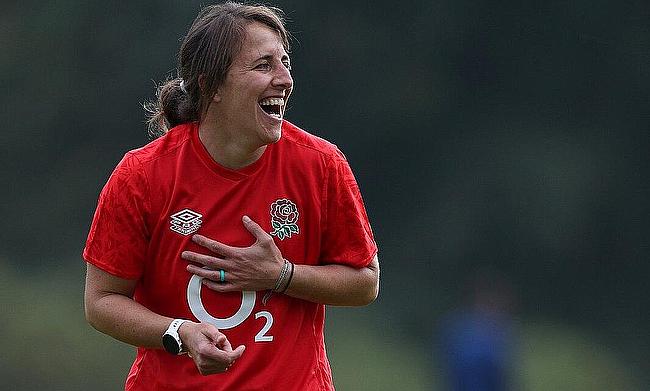 Exclusive: England star Shaunagh Brown champions the rise of female referees
Harlequins see off Bristol Bears to maintain unbeaten start in Premier 15s
“I had a gut feeling we'd be playing France!” – Red Roses react to World Cup draw
Exclusive: Katy Daley-McLean - “We now have the opportunity to go to Italy and finish with a Grand Slam

After 116 England caps, 542 points scored, nine Six Nations titles, four World Cup appearances - including the lifting of the 2014 trophy – as well as a trip to the Rio Olympics, Red Roses great Katy Daley-Mclean (MBE) today brought the curtain down on a quite magnificent international career.

The fly-half’s announcement comes the day before her 35th birthday and one month after her final appearance for the Red Roses against France at Twickenham.

Chief among her reasons for stepping away, then, is the opportunity to now spend more time with her 16-month-old daughter, Addie. Her boots are not fully hung up just yet as Daley-Mclean will continue her role as player-coach with Allianz Premier 15s side Sale Sharks Women.

With a World Cup in New Zealand, a potentially logical denouement to an outstanding career, now less than a year away, the timing of Daley-Mclean’s announcement came as a surprise to some.

Yet for Gary Street the decision, while a shock, is entirely understandable. The former England Women head coach forged a close relationship with Daley-Mclean, the outstanding fly-half his captain as the pair guided England to World Cup triumph in 2014.

Rugby has dominated my life since I entered the international set up at 18, making this a very tough decision to call time on my international career. I’ve had an incredible journey, surrounded by exceptional people and couldn’t have wished for anything more... pic.twitter.com/2zdAVRAsS6

Few people in rugby are therefore better placed to rule on Daley-Mclean’s thought process, and he says that it is entirely in keeping with her self-assured character.

“If Katy was going to go to a World Cup and wasn’t Katy Daley-Mclean, her standards are so high, she wouldn’t want to let herself and the team down,” Street told TRU, whilst also noting how the birth of his own children impacted his perspective on life and rugby.

“If she thought that, being away from the little one, being at training and being away on the other side of the world when she is a new mum [would affect her], she wouldn’t want to go out on the fact that she wasn’t good enough to do what she can do. She would only want to go as Katy Daley-Mclean.”

While a breakout autumn for former England sevens star Helena Rowland, and the continued growth of Saracens’ Zoe Harrison along with a clutch of other fly-halves impressing in the Premier 15s, leaves the future of England’s ten shirt rosier than it might have been a year or two ago, Daley-Mclean’s retirement is still a “hammer blow”.

“Katy’s standards are incredible,” Street continued, voluble and effusive in his praise for one of rugby’s finest ever fly-halves. “She saw the game so quickly – I’ve rarely seen a fly-half take the ball as flat, she is so brave in wanting the ball. I loved the fact that although she was an amazing team player, she had her own mind.

“She has a real desire, determination and just an ability to make things happen. I’ve been involved with women’s rugby since 1990, and Katy has been one of the greats. She has been top five or top three, and if not at times number one in the world since the age of about 20. To do that for 14 years is pretty remarkable, really.”

Beyond her on-field efforts, Daley-Mclean has proved influential off the field. Her leadership and exceptionally high standards ensured England’s 2014 World Cup winners were taken seriously by all, their achievements rightly lauded and praised without caveat.

It was therefore fitting that her final game in an England shirt came as captain, at its spiritual home, Twickenham, against its fiercest European foe. That a terrestrial television audience of more than 700,000 were able to watch the Red Roses battle France on a Saturday lunch-time on BBC 2 is, in some ways, testament to the work Daley-Mclean and others, including Street himself, have done to boost the profile of the sport.

Moreover, like many greats, she has lifted those around her. Daley-Mclean has played much of her club rugby for sides in the north of the country that have typically struggled, but with her in the team, Street notes, these clubs have consistently produced performances above their ability and punched well above their weight.

“I’ve seen her win games single-handedly. I’ve seen games where they would have no chance to win, and she has dragged the team to perform to a level that they wouldn’t do without her. That is the sign of a true great I think – they make everybody better.”

After the bitter disappointment of falling just short to New Zealand in the final at the home 2010 World Cup – a game which left “a deep scar”, according to Street – Daley-McLean and Street spent four years plotting England’s redemption. For her “tactical nous and ability to deal with pressure”, Street’s installation of Daley-Mclean as captain proved vital as the Red Roses bested Canada in the final.

“We were not going to settle for anything average,” Street reflects. “We wanted to be the world’s best team. If there were 10 minutes to go in a World Cup final, and I wanted somebody to work out how to win the game, there was nobody else in the world I would have picked apart from Katy. She was going to find a way through ability mixed with desire. There is nobody that would have gone more to win the game than Katy.”

While his own efforts in guiding England to that World Cup win deserve championing, Street also credits Daley-McLean with improving his abilities as a coach.

“Katy made me a better coach. I couldn’t turn up to sessions being sloppy, my standards had to be really high. It is why you coach, when you get people like Katy who challenge you and stretch you and make life difficult sometimes. She is an amazing human being.”

Daly-Mclean will now move into the coaching world herself, continuing her dual playing and coaching role at Sale and guiding a relatively inexperienced squad in the Premier 15s. The qualities that helped her become so successful on the pitch should also help her with Sale.

“She could coach England. I think if that is her ambition, I wouldn’t bet against her. I wouldn’t be surprised if she is the first woman to win the World Cup as a player and as a coach.”

And so as she enters the next chapter of her life, Katy Daley-Mclean leaves a legacy of consistent on-field excellence and off-field influence, and a reputation as one of rugby’s finest and kindest all-round individuals.

Iconic, transformative, pioneering and simply brilliant – today, English rugby has said an on-field farewell to one of its greatest ever players.

This weekend, Daley-Mclean’s Sharks travel down to meet Exeter Chiefs, with Susie Appleby’s side, new to the league this year, beginning to build momentum after several impressive performances.

The weekend’s big game is at Copthall Stadium, with Saracens, back in action after two weeks off after a Covid-19 outbreak, welcoming Loughborough Lightning to North London. A battle between potential successors to Daley-Mclean at fly-half, with Helena Rowland and Zoe Harrison both keen for personal and team supremacy, is one of many key reasons you should tune in as Saracens look to continue their unbeaten season against a dangerous Lightning side.

Also on Saturday afternoon, DMP Durham Sharks host Bristol Bears, while Wasps FC Ladies, now third in the table after victory over Loughborough two weeks ago, host Gloucester-Hartpury in another crucial game in the race for the playoffs.

The final pre-Christmas Allianz Premier 15s action comes at Sixways, where Worcester Warriors will be the latest side to try and halt the momentum of league leaders Harlequins, yet to drop a point so far this season. Can Jo Yapp’s Warriors cause a shock?