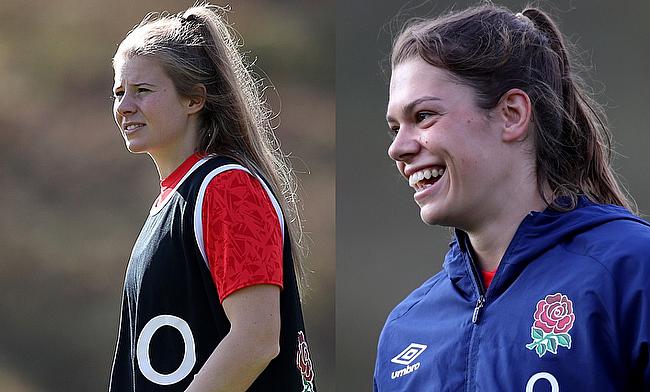 Katy Daley-Mclean 'one of the greats' as Red Roses legend announces international retirement
Exclusive: England star Shaunagh Brown champions the rise of female referees
Harlequins see off Bristol Bears to maintain unbeaten start in Premier 15s
England’s men and women are on the march…and they show no signs of stopping

If the surprise retirement of Katy Daley-Mclean on Friday had sharpened the focus on the duel between her two likeliest successors at Copthall Stadium on Saturday, then Zoe Harrison and Helena Rowland ensured they both showed they are worthy candidates as Saracens came from behind to topple Loughborough Lightning 29-24.

It was a game of real quality and intensity. With two of the Premier 15s best sides meeting, there were plenty of keenly anticipated individual matchups between international colleagues, but none were more important than the face-off at fly-half after the departure of a figure as influential as Daley-Mclean.

While both Harrison and Rowland advanced their cases, it was arguably the Saracens play-maker who, despite a late sin-binning, had the better of the encounter. It was Harrison who produced the hosts’ two finest moments of the first half, a delightful whipped pass to set up Lotte Clapp for the opening score followed by a sashay through a hole in the Loughborough defence and glide to the line to put her side ahead.

Yet Rowland and Loughborough hit back, the Lightning striking thrice in the first half to lead 24-12 before player of the match Marlie Packer’s late first-half try wrestled momentum back Saracens’ way and narrowed their deficit to seven. It was momentum they never relinquished in a heroic second-half showing that prevented the visitors from scoring even another point, ensuring they took only a single losing bonus point back to the East Midlands.

Harrison has long been nurtured by the Red Roses as a potential successor at fly-half. She filled in with Daley-Mclean absent at the Women’s Rugby Super Series last summer and the 22-year-old has had plenty of time developing in the England group over the last few years.

Rowland has burst on the scene in some style. After a remarkably effective return to XVs at the start of the Premier 15s season with Loughborough, a promising debut off the bench was followed by a star-turn from the start against France in Grenoble. Rowland’s crucial role from the bench in England’s thrilling comeback at Twickenham in the reverse fixture one week later may just have edged her ahead of Harrison in the pecking order entering 2021.

She seems to possess the gift of all the greats; time. Against Saracens, she managed to get the Lightning backline purring, and kicked from hand particularly well, a sign that she is becoming more and more complete as a 10. Clear of thought under pressure, and with a wonderfully natural style of play, for someone still relatively inexperienced in 15s, her potential is huge.

Of course, the pair may be employed in tandem, particularly with Amber Reed recovering from a longer-term injury. Harrison has played a lot at inside centre for England, starting outside Rowland in France in the autumn and alongside Daley-Mclean in the reverse fixture at Twickenham. Intriguingly, when the duo were coming through at Saracens, it was Rowland who was pushed out to 12 and Harrison chosen at fly-half.

The importance of Emily Scarratt cannot be understated as the only entrenched piece of the midfield. As a 13, there is little she cannot do, and her refined kicking game and powerful clearing boot eases the burden on a fly-half considerably. Her chemistry with Daley-Mclean has been key to England’s attack for nearly a decade, Scarratt’s carrying and offloading threat marrying perfectly with Daley-Mclean’s willingness to play close to the line.

Scarratt’s presence outside Rowland at Loughborough has enabled the youngster to play naturally, while Harrison has played her best rugby for England with her in the team. Further, with Sarah Hunter still absent with a neural issue in her hand, Daley-Mclean’s retirement means the centre’s leadership becomes even more vital in a World Cup year.

There may be others who force their way into contention. Meg Jones is the league’s top point-scorer and playing well, benefiting from a sharp partnership with scrum-half Claudia MacDonald, while Emily Scott is playing some fine rugby at Harlequins, pushed on by the developing Ellie Green.

The adapted laws that have enabled the Premier 15s to restart have encouraged an up-tempo game played creatively, and the league’s half-backs have thrived. Boosted further by the arrival of a number of England Sevens squad members, multi-talented individuals who have been afforded opportunities to thrive on an international stage and bolstered Premier 15s squads, the quality of play in the halves throughout the competition has never been higher.

Here's how the Allianz #Premier15s table looks at the end of the year ?? pic.twitter.com/dMdcYKNW2u

But it will be one of Harrison and Rowland who in all likelihood will travel to New Zealand as England’s first choice 10. Daley-Mclean leaves a huge hole, and Simon Middleton has less than a year to figure out her successor, almost certainly without an opportunity to see them against the Black Ferns, Australia, Canada or the USA. A game against the Barbarians or a similar invitational side is a possibility, while the Six Nations encounter with France will be key.

This may be to Harrison’s benefit; the Super Series last summer provided vital opportunities as a starter against these sides for her. Rowland may also have commitments in the sevens game after the news that a Great Britain side has been funded by the National Lottery for the Olympics.

Whoever Middleton chooses, his selection will have a key role to play if England are to win back the World Cup as it ventures south of the equator for the first time. Entering 2021, who succeeds Daley-Mclean is by far the Red Roses’ biggest question to answer.

Elsewhere in the Premier 15s last weekend, Wasps FC Ladies provided another reminder of their burgeoning reputation as potential contenders, outlasting an impressive Gloucester-Hartpury performance to prevail 29-17 and stay at the head of the chasing pack behind leaders Harlequins and Saracens.

Quins secured bonus-point win number eight of the campaign away at Worcester, while there were also comfortable wins for Bristol Bears and Exeter Chiefs against DMP Durham Sharks (50-3) and Sale Sharks (38-0), respectively.

The league now breaks for Christmas, but resumes in some style on the 2nd of January with the rearranged meeting of the top two at the Twickenham Stoop. The winning run of one of Harlequins and Saracens will come to an end in what is sure to be a fast and fierce encounter between title rivals – the perfect way to begin a huge year for women’s rugby.