Jess Breach Exclusive: “Having time on the ball allows me to do what I like to do best" 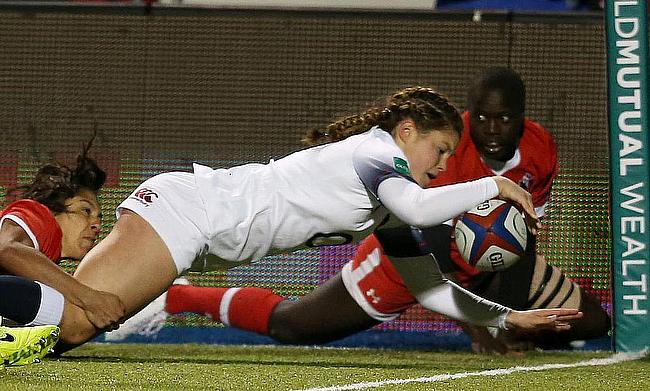 As a former English Schools sprint hurdler, Jess Breach knows her way around a fast start.

Moving into a year that will likely see Breach head to New Zealand for the 2021 Rugby World Cup as one of the most dangerous weapons in Simon Middleton’s armoury, the Harlequins and England winger has established herself as one of the world’s best in her position, a player capable of cutting even the staunchest of defences to ribbons.

For England, at least, Breach certainly flew out of the blocks. Six tries on debut against Canada in 2017 were followed by five more on cap number two. As introductions to Test rugby go, it is hard to imagine a better start.

In the autumn, tries against Italy and France advanced Breach’s current record to a comparably pedestrian 24 tries from 15 Red Roses caps. At 23, that she is conceivably, and by her own admission, still growing as a player makes her future frightening, and she is pushed on by a competitive England outside backs room of real quality and depth.

“I am still learning new things,” Breach admit. “Having time on the ball really, that allows me to do what I like to do best, stay hungry and refine the skills that I am good at, and also that I need to work on.

“It is important to have that competition. I think with England it is definitely healthy competition. We all try to help each other improve, as well as the team. If someone is injured, you know that you are going to bring someone in that is at the same standard and quality.”

Quins' title rivals, Saracens who they face on Saturday, have two wings of real quality, each familiar to Breach. Former England Sevens colleague Deborah Fleming has made a strong return to the fifteen-a-side game, while captain Lotte Clapp is a familiar Premier 15s foe. The wider confines are an area they may look to target against a Harlequins side that conceded a hat-trick to Bristol flyer Jasmine Joyce two games ago.

Though Breach is typically swift to point out that she, Leanne Riley and Emily Scott were absent on that occasion, outside defence has been a focus for Gerard Mullen’s side.

“We learned a lot from that [Bristol] game. We have tried to get our spacings right in defence and be a unit as one team in the line and not create doglegs or big holes that people can run through, not to let three tries in from one player who has just gone around the edge.”

The physical battle up front also catches the eye. With Marlie Packer and Poppy Cleall in particularly outstanding form, Saracens have the might to match Harlequins’ power-packed front eight, particularly in the absence of the hosts’ influential tighthead Shaunagh Brown, who has been suspended for three weeks after a dangerous tackle against Worcester.

Saturday’s clash will be the first time that these two sides have met under the adapted Premier 15s laws, with Breach hypothesising that these variations may change the patterns of a rivalry that has largely gone against Harlequins recently.

While both sides are yet to drop a point in the league in 2020-21, it was Saracens who emerged victorious in the final in both 2018 and 2019, while the scars of last year’s sole match between the pair, when Harlequins relinquished a 17-point lead to lose 33-27, still sting. For that reason, Breach believes, the battle will be as much mental as physical.

“We need to go out there thinking we are going to win and thinking that we are better than them, having that confidence in our ability,” Breach explained. “You can’t think too much about who it is. You want to go out there and perform your best as a team and as an individual.”

Saracens’ last Premier 15s encounter offered insight and hope. With the defending champions back in action after a Covid-19 enforced two-week break, the Loughborough Lightning pushed them all the way in a tight 29-24 battle that nearly swung the Lightning’s way, an encounter that Breach says “gave us confidence that they are within reach and other teams like us can beat them”.

If 2020 was a year of positive growth despite significant challenges for women’s rugby, then the opportunities that 2021 presents excite. For Breach, along with continued development of her considerable abilities, there are three key prongs to target – a third successive Six Nations Grand Slam, a World Cup win, and, for Harlequins, a first Premier 15s crown.

“It is a fantastic year just even to be a part of. We need to continue getting better and be at our best when it comes to being in New Zealand. We’ve got a long way to go yet.

“Going back-to-back as Grand Slam champions is obviously a huge thing, and we should take confidence from that, but also not be too naïve about where New Zealand and other countries are.

“At Quins, we haven’t won the Premiership in the last two years so that is something we will be looking to do. It is a massive year.”

And there would be no faster, or better, start to the new year for Breach and Harlequins than victory over Saracens.