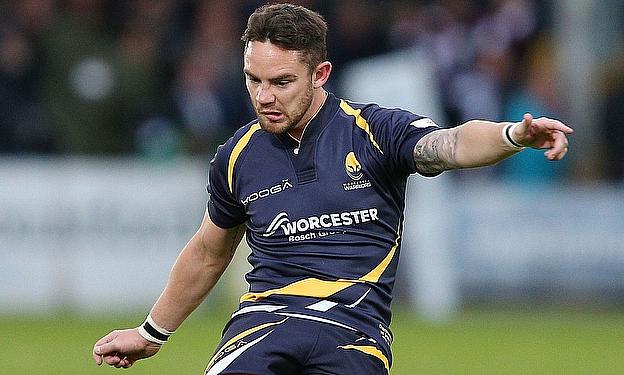 Worcester secured a quickfire Aviva Premiership return after a remarkable climax to the Championship final second leg at Sixways.

But Pennell and Lamb had other ideas as the Warriors secured an aggregate triumph by a single point after Bristol had been reduced to 14 men following skipper Dwayne Peel's yellow card.

Worcester led by 10 points at the break following a Pennell try, Lamb conversion and three penalties - but they failed to score a point between the 35th and 75th minutes, until Lamb converted a penalty try following relentless forward pressure - then came up trumps at the climax.

For Bristol, it was a case of play-off promotion agony for a fourth time since 2009, and they will remain in the Championship for at least another season as Worcester began wild celebrations to mark a Premiership reappearance just 12 months after they were relegated..

Worcester were unchanged from the side that gained a last-gasp 29-28 win at Ashton Gate last Wednesday, but Bristol made five switches - two enforced - with centre Ben Mosses and flanker Marco Mama replacing injured pair Gavin Henson and Ryan Jones, respectively, while there were also starts for Robinson, Tovey and lock Ben Glynn.

Lamb kicked Worcester into a seventh-minute lead, but Bristol almost wiped that out immediately when Robinson's clever kick into space bounced tantalisingly for wing David Lemi before then narrowly eluding his grasp and Warriors cleared the danger.

Bristol twice decided against taking kickable penalties in the first 10 minutes, then Robinson missed a straightforward chance before opening his account after 17 minutes.

Both sets of forwards continued tearing into each other, and after Lamb and Robinson exchanged further penalties, Worcester exerted a vice-like grip on the second quarter.

Lamb, playing with far more control and authority than he had done at Ashton Gate, kicked into space behind Bristol's defence, and a kind ricochet off a Bristol player enabled Pennell to dive over in the corner.

Referee JP Doyle needed television match official confirmation before awarding the try, then Lamb's touchline conversion and a 35th-minute penalty opened up a 16-6 interval lead and left Bristol with it all to do as they reflected on three missed Robinson penalties from five shots at goal.

Robinson needed just four minutes to open his penalty account in the second period, cutting the deficit to seven points, but Bristol's forwards could not prosper following a maul that travelled 20 metres towards Worcester's line.

The Bristol pack infringed at exactly the wrong time, and Worcester returned play inside the opposition half, appearing to have weathered the storm.

But back came the visitors, and Worcester were made to pay after wing Cooper Vuna was sin-binned for killing possession, with Bristol immediately making their temporary one-man advantage count.

The Worcester pack was relentlessly driven backwards, and Lam pounced to score, with Lamb's conversion making it 16-16 and setting up a gripping finale.

And worse was to come for the Warriors with Vuna still off the field as Lemi sprinted through a huge gap and then delivered a scoring pass that an unmarked Tovey gratefully accepted.

Robinson added the conversion as Bristol opened up a six-point aggregate lead, then Lemi showcased his attacking brilliance once more by carving out another opening and then sending Wales international Morgan sprinting over.

Another Robinson conversion gave Bristol a healthy cushion, but Warriors' penalty try ensured a nerve-shredding conclusion as Worcester went for broke with a period of pressure that the visitors only just repelled after Peel was sin-binned.

But the Warriors patiently went about their business, and Pennell was worked over for his second try and Lamb kept his nerve amid nerve-shredding tension to send Sixways wild.