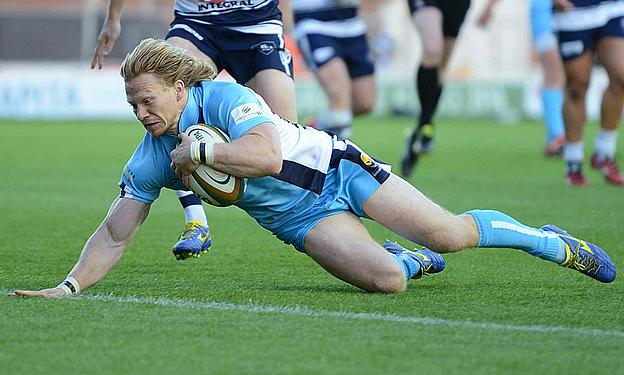 Number eight Mitch Eadie and a double from wing David Lemi delivered Bristol's tries, with centre Gavin Henson kicking 10 points, but Henson's night ended midway through the final quarter when he was carried off after suffering a suspected broken ankle.

Given that Bristol had two players sin-binned during the first half and Warriors fly-half Lamb landed only two kicks - both of them conversions - from six shots at goal, it could easily have been a far worse night for the home team in front of a 12,000 crowd.

But they kept themselves in the contest through some dogged defence and fierce commitment as the clock ticked down, with substitute Nicky Robinson booting a 76th-minute penalty that looked to have been done enough until Annett was driven over from close range during the dying seconds.

Fly-half Matthew Morgan was one of three changes to the Bristol line-up from their last game, with Eadie packing down in the back-row after recovering from shoulder trouble and hooker Chris Brooker also starting in a team captained by former Wales international scrum-half Dwayne Peel.

Worcester, chasing an immediate Premiership return following last season's relegation, were without flanker Sam Lewis, who had returned to be with his family in Wales following the death earlier this week of his father. Betty wore the number seven shirt as Lewis' replacement.

Bristol made a confident start, with Henson booting them into a second-minute lead, but it did not take long for Worcester's pack to exert set-piece control, and Mike Williams' clean lineout take generated an unstoppable drive that ended with Betty touching down.

Back came the home side, though, and a blistering Morgan break from deep inside his own half was continued by Henson, whose scoring pass was taken by a supporting Eadie.

Henson's conversion made it 10-5 as the opening quarter continued at a frantic pace, only for Bristol to press the self-destruct button when prop Gaston Cortes received a yellow card for a technical offence and Worcester gained a penalty try from the resulting scrum that Lamb converted.

Replacement Anthony Perenise then followed Cortes to the sin-bin as Worcester exerted relentless scrum pressure, and with Bristol still down to 13 players, Vuna delivered a superb finish as he claimed his eighth try in the last eight games.

Bristol could easily have folded, given their numerical disadvantage, but after Cortes rejoined the action they hauled themselves back into the contest when the outstanding Eadie made headway, found Brooker in support and Lemi sprinted over unopposed.

Henson's conversion tied a thrilling contest at 17-17, yet Worcester went back in front on the stroke of half-time as Lamb sent Biggs sprinting through a huge gap for Warriors' fourth try, but Bristol were handed a potential lifeline by Lamb's poor kicking that saw him miss three first-half conversions and a penalty.

A Henson penalty just after half-time narrowed the gap, and Bristol established a foothold inside Worcester's 22, only to be denied by an outstanding Warriors defence that had Williams and lock Jonathan Thomas as its central figures.

The second period proved to be far more attritional than a breathless opening 40 minutes had been, and Henson missed a chance to put Bristol ahead when he drifted an angled penalty wide with 13 minutes left.

That proved to be Henson's last act of the contest as he was then hurt in open play, but Bristol regrouped and Robinson's kick was gathered by Lemi for his second try eight minutes from time to give the west country club a narrow advantage.

Bristol's night looked to have reached a successful conclusion when Robinson booted a late penalty, but Annett had other ideas and Lamb's conversion gave Worcester a dramatic win.