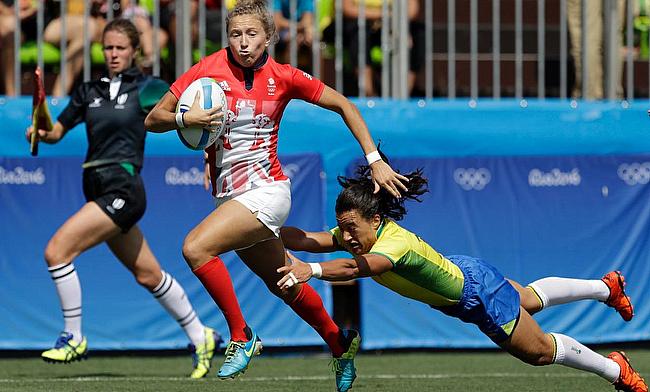 After an 82-year absence, rugby – returned with aplomb to the Olympic Games as the pool stages of the Women’s Sevens tournament began at the Deodoro Stadium.

Across twelve, Australia flashed their credentials as tournament favourites, Canada and Great Britain set up a mouthwatering, winner-takes-all clash atop Pool C, and Brazil fought valiantly but ultimately lost their two opening

The honour fell at the feet of Spain’s Patricia Garcia to mark the official return of Olympic rugby with the opening kick-off of the tournament’s inaugural contest between France and Spain.

Unfortunately, Garcia and her Spanish teammates were to fall short off their own piece of history as France comfortably emerged victorious, 24-7.

A try apiece from Camille Grassineau, Lina Guerin, Caroline Ladagnous and Elodie Guiglion, alongside two conversions from Pauline Biscarat was enough to ensure that Garcia’s late effort of her own was nothing more than a consolation score.

Elsewhere in Pool B, New Zealand made a major statement of their ability to compete for a medal finish with a rampant 52-0 victory over Kenya.

A Portia Woodman hat-trick, including a try straight from the opening kick-off, would set the tone for a one-sided demolition by the All Blacks with Kayla McAlsiter also grabbing a pair of tries.

Further Kiwi scores came from Huriana Manuel, Gayle Broughton, Niall Williams who also survived being down to six players twice in the first-half.

The tournament’s opening fixture for both the Team GB collective and competition hosts Brazil served to be a far scrappier affair than either of the day’s earlier two games with a misfiring British side met by a tenacious Brazilian effort.

Despite controlling most of the possession in the opening half, Team GB were only able to cross the whitewash once through Joanne Watmore – a testament to the Brazilian resilience encountered and the plethora of unforced handling mistakes the visitors were guilty of. At half-time, GB held a slender 7-3 lead.

However the game as a contest was to open up in the second half as a brace from Natasha Hunt, a superb individual effort from Emily Scott that saw her run a perfect arching line through the Brazilian defence before sprinting clear, and a Jasmine Joyce touchdown would ultimately push the visitors out of reach.

Canada’s clash with Japan did not experience anything close to the disjointedness prevalent in the other Pool C clash however with the Canadians laying down a significant marker of their own with a comprehensive 45-0 triumph.

A side characterised by an unorthodox physical prowess for the seven-man code, Les Rouges feasted on a gluttony of Japanese turnovers in the first-half to build a healthy 26-0 lead at the break; Ghislaine Landry (x2), kayla Moleschi, Biana Farella all going over.

The second-half was to proceed in much the same way as Farella notched a second to keep Canada operating at a canter. Japan did mount a spirited attempt at the Canadian try-line late-on, only to be turned over and forced to watch Brittany Benn sprint the length of the field for her side’s sixth try. Natasha Watcham-Roy added a final score in with time dead to complete the rout.

With Luisa Tisolo pulling the strings, Fiji caused the tournament’s first upset with a shock 12-7 victory over the USA.

Tisolo’s show-and-go sprint through the American defence was the difference at the break before Timaima Ravisa opportunistically capitalised on a Fijian choke tackle; ripping the ball away from the maul and running in unopposed for her country’s second try.

And although Alev Kelter went over for the USA to bring the score to within five, some excellent Fijian defence and breakdown pressure ensured the Pacific Islanders would walk away with an invaluable three points.

Pre-tournament favourites Australia were one of the last two sides to take the field on Saturday matching up with an upstart Colombian side.

Despite number of spirited individual performances, the pre-game expectation of an Australian rout would soon come to fruition with the Wallabies easing past the South Americans to the tune of nine tries in a performance marked by near faultless handling and passing throughout the entire Australian side.

After a two-hour intermission, play resumed for the afternoon session with France comprehensively dispatching Kenya, - becoming the first side to complete the day unbeaten.

A back-and-forth first half ensured France were made to work hard for their 14-7 lead at the interval, Caroline Ladagnous and Jade Le Pesq touching down either side of a Celetine Masinde breakaway effort.

However the floodgates were to open in the second half, Fanny Horta, Lina Guerin, Amiel Audrey and Ladagnous (for her second) all scoring as Les Blues’ superior fitness and stamina became a decisive factor in proceedings.

New Zealand joined in enjoying an unbeaten afternoon after cruising past Spain 31–5 in their second pool match.

With standout performers Portia Woodman and Kayla McAlister continuing to pull the strings, the All Blacks eased past an abrasive Spanish side, with further tries from Tyla Nathan-Wong, a second from McAlister (this time a dizzying, length-of-the-field score) and Theresa Fitzpatrick securing a comfortable win.

Team GB banished the memory of their stop-start performance against Brazil earlier in the day with an emphatic victory 40-0 over Japan to continue their unbeaten tournament run.

Bouyed by tries from Amy Wilson-Hardy, Alice Richardson, Joanne Watmore and Katy McLean in the first-half, the British ascendency continued after the interval with further scores from Emily Scott and Heather Fisher rounding out the scoreboard action.

Erstwhile in Pool C, Canada ran rampant over Brazil, 38-0 to reclaim their spot atop the group and secure their spot in tomorrow’s knock-out action.

To the palpable disapproval of the watching supporters, Canada established firm control of the game immediately with Karen Paquin scoring arguably the try of the day; a 50m run characterised by some quick feet to get on the outside of her defender before delivering a powerful hand-off to the covering defender to scamper away clear.

Canada tightened their stranglehold on the game with further tries from Jennifer Kish, Kayla Moleschi, a second from Paquin, and a late brace from Bianaca Farella. Despite the raucous support of the Deodoro crowd, Brazil were unable to respond with a conciliatory score.

USA vs Colombia (A)

The day’s penultimate game was the first to pit two sides who had lost their opening game against each other in the USA and Colombia. Unfortunately there was to be no Cinderella story for Colombia, as the USA rebounded from their earlier defeat to Fiji, emerging victorious -  and offering hope that they could yet still progress to the knockout stages.

Alev Kelter set the American victory in motion with a rampaging run in the 2nd minute before Lauren Doyle capitalised on a turnover to cross unopposed. Kelter added her second and Kathryn Johnson also touched down to give the Eagles a 24-0 half-time lead.

Jessica Javelet, Ryan Carlyle Joanne Faavesi, and Johnson’s second all elongated the scoreline in the second half to extend the lead just short of the half-century mark. The result keeps the Colombians both winless and scorelines in the competition whilst the USA’s one-sided win means that, improbable as both an American and Colombian victory in their respective fixtures on Sunday is, the Eagles still retain a slim chance of progression out of Pool A.

Australia rounded off the day’s proceedings with a 36-0 dispatch of Fiji to book their place in Sunday’s knockout rounds in impressive fashion.

First-half scores from Emilee Cherry, Emma Tonegato and Charlotte Caslick ensured the Wallabies were able to keep their Pacific rivals at an arm’s length all game, with Ellia Green, Chloe Dalton, and Tonegato’s second furthering the deficit in the second seven-minute segment.

Despite their defeat, it should be Fiji who join Australia in the knock-out rounds barring a shock American victory over Australia in conjunction with a Colombian win over the Pacific islanders.