Wins for Northumbria and Cardiff Met increase pressure at the top 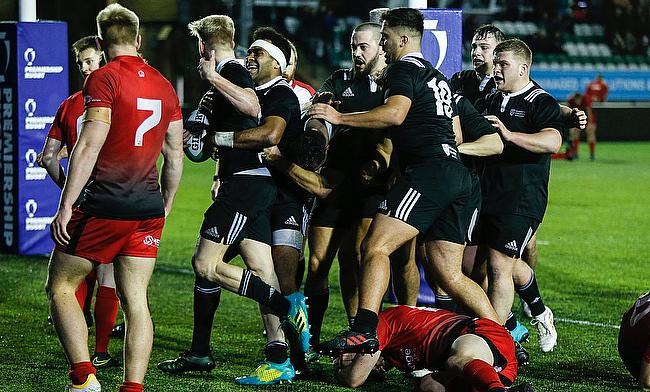 Cardiff Met can't look too far ahead, says Northmore
Second half blitz helps Bath go to the summit
Our strength in depth has been key - Jones
Hartpury shine as champions crush Durham to go top

Northumbria University and Cardiff Met University both secured victories in BUCS Super Rugby as the domestic title race continues to hot up.

The top six sides are separated by just three points and with all of those teams having played the same number of matches, this is arguably the most competitive season to date.

Both Northumbria and Met are now just one point behind leaders the University of Bath thanks to hard fought wins over Cardiff University and Durham University, respectively.

Below is a review of the BUCS Super Rugby action, plus we take a look at some of the other results from around the BUCS leagues and cups.

Northumbria University produced a gutsy second half display to secure a bonus-point win over Cardiff University, which leaves them second in the BUCS Super Rugby table.

The away side held a 14-3 half-time lead thanks to a couple of tries while Josh Hodge knocked over a penalty for the hosts.

We go in at HT down by 11 and come out all guns blazing to steal the win out of Cardiff’s hands!!!

A third try of the evening gave the division’s bottom club an 18-point lead, but scores from George Wacokecoke and Yaree Fantini put Northumbria back in contention before Wacokecoke’s second nudged the home side ahead.

However, their lead didn’t last long as Cardiff claimed their bonus-point try at Kingston Park, but a penalty and a late score from Hodge clinched the win for Darren Fearn’s side who are now just one point off the summit.

Cardiff Met edged out Durham University to move to within a point of BUCS Super Rugby leaders the University of Bath.

In the driving wind and a rain, Cardiff Met were clinical at the beginning of the second period and it proved to be decisive for Danny Milton’s side.

In a tight game in miserable conditions, tries from Luke Northmore and Jack Samuel was the difference while Kipa Fawcett kicked two penalties for Durham.

The game was level at 3-3 at the break with Harry Johnston landing a penalty and the fly-half also added a conversion in South Wales.

Man of the Match Luke Northmore: “It was a tough one. The weather conditions turned as the game went on and we knew we had to bring a physical performance. In the first-half, we shot ourselves in the foot because we didn’t take the points when we should have, but credit to the boys in the second-half. I thought we were outstanding.

AND THAT’S THE GAME!! Met use their possession quickly, booting the ball off the pitch to win a fierce game against a defensively impressive @DURFC 15-6!!! An impressive performance in difficult conditions from both sides #CDMDUR #BUCSSuperRugby pic.twitter.com/lFL1rn9QdX

“At half-time, we talked about playing in the right areas and bringing a dominant performance we know we can bring. It was a kick up the backside and we came out flying in the second-half.”

Cardiff Met Head Coach Danny Milton: “The coaches came together beforehand to talk about the half-time message and it was ‘We are in a bit of trouble here!’

“We gave away too many penalties in the first half and we didn’t bring the sort of performance we were looking for so full credit to the boys in the second-half to turn it around.

“These games, week on week, are tough. You do get depressed looking at the fixture list! It is frustrating that we haven’t clicked, but that is pleasing in a way because we are churning out the results we want.”

The University of Exeter made it four wins from four as the Premier South league leaders gained their revenge of last year’s champions, Hartpury, with a 34-12 win. Cardiff Met are up to second after a 22-5 victory away at the University of Bristol and Swansea University edged past Oxford University 10-5.

The former were beaten 30-24 by the University of Nottingham while Loughborough 2nds secured a 20-15 victory against Edinburgh. Elsewhere, Bishop Burton College sealed their third win of the campaign after beating the University of Birmingham 23-22.

South A and South B

Hartpury 2nds still lead the way in South A after securing their sixth straight win of the campaign. The Gloucestershire side beat the University of Bristol 20-7 while the University of South Wales suffered a 29-26 defeat at the hands of Swansea University. Elsewhere, Bath 2nds beat Exeter 2nds 31-20.

Disappointing result this afternoon losing 29-26 against @SwanseaUniRFC away. Picked up 2 important points. #USWrugby

In South B, Exeter 3rds made it four wins in the trot thanks to a 29-22 victory over Hartpury 3rds and the University of Portsmouth claimed their second win of the season after beating Reading University 31-27 to move them up to fourth in the table.

Northern 1A and 2A

Newcastle 2nds won the battle at the top of Northern 1A after defeating Manchester Met 19-14 in the North East. Elsewhere, the University of Liverpool beat Durham 4ths 42-21 while Newcastle 3rds picked up their first win of the season as they came away from the University of Hull with a 15-12 victory.

In the only game in Northern 2A, Sheffield Hallam University returned to winning ways after beating Lancaster University 14-0.

The University of Leicester lead the way in Midlands 1A after a 29-14 victory over second placed Loughborough 3rds while Nottingham Trent 2nds picked up their second win of the campaign by beating Oxford Brookes University 19-10.

Keele University have progressed through to the last 16 of the Northern Conference Cup after beating Liverpool 3rds 26-9 on Merseyside while fellow Northern 2A side, Manchester 2nds received a bye into the next round. Meanwhile, Liverpool 2nds were given a walkover result against the University of Huddersfield.

Northern 3A leaders Liverpool John Moores University are out of the Northern Conference Cup after conceding a walkover result against Newcastle 4ths, but there was better news for the University of Chester as they beat York 2nds 27-5. Nothern 3B outfi Leeds 3rds defeated UCLAN 29-5.