Our strength in depth has been key - Jones 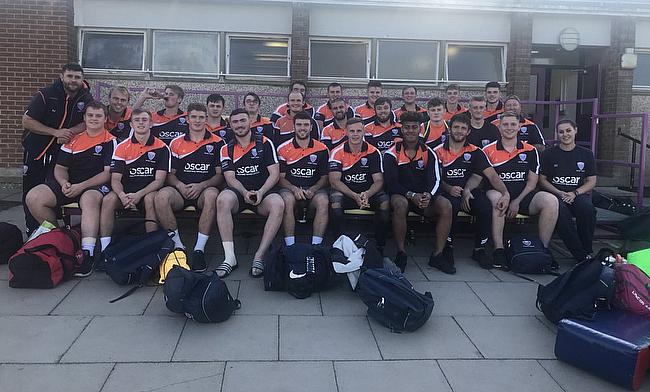 Rob Jones believes the strength in depth which Manchester Met have created this year is the reason behind his side’s excellent start to the new university rugby campaign.

After a league and cup double last season, MMU have begun life in Northern 1A in the perfect manner having won both of their domestic fixtures so far.

Wins over Durham University 4ths and the University of Liverpool were followed by a victory over Harper Adams University in the first round of the BUCS Trophy last week.

It means MMU have now not lost a game for just over a year and after a solid pre-season schedule, Jones’s side have hit the ground running this term with a strong squad at his disposal.

“You need that strength in depth. We are only three competitive weeks into our season in Northern 1A and already you pick up injuries,” Jones said.

“That’s rugby. That’s not complaining, it is just the way it is. We found out in this league three years ago that as soon as we got injuries, we didn’t have the depth so we couldn’t survive. Had we maintained that squad, we would have certainly survived. This year, we have far better depth.

“Because the quality is so much stronger, we have seen value of our strength in depth and we are training as a group instead of training as a 1st XV and 2nd XV. We have a wider training squad and that means we have far better competition for places and in turn, makes my job of picking a team a lot harder!

“The recruitment is higher and that shows with our team against Newcastle 3rds this week. We have 11 first years starting and that says a lot about where we are at and our growth. This group of lads will be together for a long time and hopefully that bodes well for the future.”

MMU’s pre-season has also had an influence on the way they have started the campaign, with a trip to Hungary only enhancing the rugby programme at the university.

“First and foremost, a lot of hard work went in through the summer to prepare a quality pre-season,” Jones added.

“We took 26 lads and six staff to Hungary and I think everything went as we planned. This was the first pre-season camp for any sport at the university so we were definitely treading new ground.

These lads were a pleasure to be around, a great bunch of young gentlemen #NoCoachingNeeded https://t.co/wexuY6fqfp

“We were there for three days up in the mountains of Matrahaza, north-east of Budapest. That was at their Olympic training centre which was a great experience! The main outcome of it all was bonding and that pre-season has set us in good stead for our results so far.

“Our trip also attracted sponsorship from Oscar Recruitment which was great. They are award-winning and are one of the forward-thinking, fresh and innovative recruitment companies in Manchester. It is great that they have backed us.

“They are really proactive in supporting us and supporting the lads in what they want to achieve. The things they do off the field really enhances the programme as well.”

Jones and his staff are continuing to push MMU Rugby in the right direction and after a triple promotion for their three men’s sides last season, ambitions are already high for this term.

Jones said: “I am always knocking on my boss’s door! You have got to be ambitious. I have huge ambitions for the university.

“We know rugby is the toughest sport to crack at university level because it is the most prestigious and historic sport associated to the universities.

“There are a lot of quality universities who are doing great things and I will be honest, some of their ideas I do pinch. But, I say this all the time, we are the only university in the north-west that is serious about its sport.

“I don’t want to be over-excited because we need to keep our feet grounded, but it’s positive at the moment especially after great wins over Liverpool and Durham. I said to the coaches at the start of the year, ‘What do we want to achieve?’ If I’m being honest, we sort of focused on being competitive, but we are being more than that at the moment across the board.”

MMU’s 1st XV are currently joint top of Northern 1A heading into this week and next up for Jones’s side is back to back trips to Newcastle University.

Next Wednesday, they face Newcastle 2nds who have also won both of their games so far, but first up for MMU, is a clash with bottom of the table Newcastle 3rds and Jones expects a tough test in the North-East.

He added: “We are expecting a massive challenge. They will certainly want to help their second team out for the following week.

“They are planted to the foot of the league, but you can’t go to the North-East and it be an easy fixture. They’ve put us out at Wallsend Rugby Club and we know it will be baltic and freezing! The lads are massively committed to it and we are looking forward to the next two weeks.”