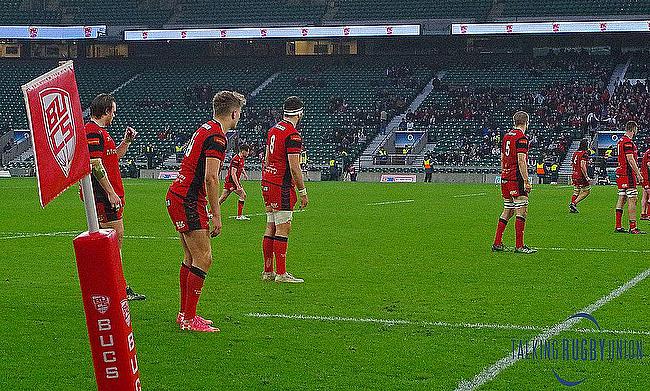 The current BUCS Super Rugby Championship holders secured their third victory of the campaign to move to the summit, but they are level on points with the University of Bath after they picked up an excellent win over domestic champions, the University of Exeter.

Northumbria University are up to fourth after a victory over Cardiff Met on Friday night while, Loughborough University gained revenge against Nottingham Trent and Leeds Beckett comfortably beat Cardiff University.

Below is our usual round-up from university rugby’s top tier, plus, we review the action from across some of the other leagues as well as taking a look at the first round of the BUCS Trophy.

Hartpury University ran in eight tries as they ended Durham University’s 100 per cent start to the season.

The current champions scored five converted tries in the first half to lead 35-7 at half-time while Henry Paremain dotted down for the hosts.

Sean Lynn’s men added a penalty after the break, but it was Durham who got the first score of the second 40 as Paddy McDuell rounded off an excellent move.

However, Hartpury were able to cross on three more occasions to wrap up a convincing win to leave them on top of the BUCS Super Rugby table.

Tries from Hugo Stiles, Finn Murphy, Austin Hay and Will Partington gave Bath a 26-14 lead at the break.

Matt Blee and Richard Chapstick went over for Exeter in the first half and Jack Rouse added a third after the restart following a Stiles penalty.

With the score at 29-21, Murphy touched down to ultimately seal the win for Bath before a late try from Luc-Pierre Rou, plus a penalty from Isaac Hydleman, earned two bonus points for the visitors.

Bath Captain Tom Doughty told the club’s website: “I am so immensely proud of the boys. This is my fourth year here and the first time we have beaten Exeter. We’ve taken the momentum from the last two games and just performed so incredibly well tonight.”

Tries from Yaree Fantini and Charlie Parkhouse helped Northumbria to a 21-12 half-time lead, with the visitors crashing over on two occasions.

Cardiff Met cut the deficit to just five points after the restart following their third score of the evening, but the superb Josh Hodge was able to extend Northumbria’s advantage as he converted his own try.

The away side continued to battle and they were rewarded for their endeavour as they clinched their fourth try to set up a tense finish.

Northumbria concluded the match with 14 men after Tom Galbraith was shown a yellow card and Cardiff Met pressed for the victory, but the home side held on to move into the top four.

Loughborough University secured their first victory of the BUCS Super Rugby season after inflicting a heavy defeat on Nottingham Trent.

Aaron Tait, Sam Bailey and Ollie Kilgallon went over before the break for the home side.

? TRY OF THE WEEK CONTENDER ?

Kilgallon added a second on 58 minutes and Tom Walsh followed with a superb score as Loughborough gained their revenge over Trent after losing to their Midlands rivals 29-17 in the opening match of the season.

Max Craven slotted Trent’s only points from the tee in the first half.

Loughborough Coach Gerard Mullan: “We’re absolutely delighted. I think the manner in which the lads played tonight was outstanding. I thought our intent was excellent throughout the whole of the game.

“The training week has been excellent. We have had really good competition and it has been very much driven by the players themselves and we saw that tonight. They owned it and brought a performance in front of a big crowd.

“I am proud of the boys, but it is only our first win. We have got to kick on from this and we have a big game against Durham next week. We have got to go back to back.”

Loughborough Man of the Match Jarod Leat: “We spoke about bringing intent this week and probably knew we weren’t playing as well as we wanted to throughout the start of the campaign. We really spoke as a squad that the intent was missing and our backs and forwards brought it all the way today.”

Leeds Beckett University returned to winning ways thanks to a five-try win over bottom of the table Cardiff University at Headingley.

Three scores, including tries form John Okafor and Tom Williams, gave Beckett a comfortable 21-0 half-time lead. After break, it was first blood to Cardiff but the hosts immediately responded to secure their bonus-point.

Jonny Keh then wrapped up the win by scoring the try of the match as he ran in from 60m out to seal Beckett’s second victory of the campaign.

Durham University secured their third bonus-point victory on the spin after thumping Loughborough University 69-0 in the Midlands. Along with Durham, Northumbria University remain undefeated following their comfortable 53-0 triumph against North-East rivals Newcastle University while the University of Edinburgh made it two wins on the bounce as they beat the University of Birmingham 42-10.

The University of Exeter narrowly beat Cardiff Met University 7-0 as the BUCS Champions maintained their winning start to the campaign. Elsewhere, the University of Bristol claimed their first victory of the season following a 51-19 win over Oxford University while Hartpury University v Swansea University was postponed.

Newcastle University are now the only unbeaten side in North A as they made it four wins on the spin against the University of Edinburgh. The North-East outfit secured a 40-33 victory while Durham 3rds, who had not tasted defeat before this week, slipped to their first loss of the season after being beaten 33-8 by Bishop Burton College.

There was only one fixture in North B this week and Durham 3rds lost their 100 per cent start to the term as they drew 24-24 with the University of Strathclyde away from home.

Just like the 1st XV, Hartpury 2nds currently top their respective league after making it four wins from four. The Gloucestershire side defeated Bath 2nds 40-28 in this West Country clash while elsewhere in the division, the University of South Wales thumped UWE 56-0 and Exeter 2nds beat the University of Bristol 42-31.

Like in North B, there was only one game in South B this week and St Mary’s University made it three wins on the trot after beating Cardiff 2nds 38-13.

Sheffield Hallam University and Lancaster University lead the way in Northern 2A as both maintained their 100 per cent starts to the season. Hallam thrashed Liverpool 2nds 41-7 while Lancaster beat Keele University 22-15. The only other result in this division saw Manchester 2nds hammer UCLAN 69-0 to clinch their first win of the campaign.

In Northern 2B, Northumbria 2nds made it three maximum point wins on the spin after a thumping 89-0 victory over Sheffield 2nds. Meanwhile, Leeds Beckett 4ths claimed the bragging rights in Yorkshire as their first win of the campaign was a 33-26 victory over city rivals Leeds 2nds.

Bangor University moved to the top of Northern 3A after beating Edge Hill University 57-13. The Welsh side profited from the University of Chester’s first loss of the campaign as they fell to a 29-27 defeat away at Liverpool John Moores University. Elsewhere, Manchester Met 2nds returned to winning ways with a 33-14 victory over Liverpool 3rds.

York St John University secured their third consecutive win as they beat York 2nds 32-24, but both Newcastle 4ths and the University of Huddersfield remain in pursuit of the league leaders. Newcastle beat Sheffield Hallam 2nds 19-15 while Field made it back to back wins by defeating Leeds 3rds 12-10.

Nottingham 3rds continued their 100 per cent start to the season after beating city rivals Nottingham Trent 3rds 21-10, but they are still behind league leaders the University of East Anglia. The newly promoted side are making waves in this division and claimed their third win on the spin thanks to a 34-7 victory away at Birmingham 3rds. Elsewhere, Coventry University secured back to back wins after defeating Warwick 2nds 13-5.

The University of Dundee picked up their first win of the season as they beat Durham 4ths 17-10 in the first round of the BUCS Trophy. Fellow Scottish 1A side the University of Aberdeen beat Newcastle 2nds 16-14 while Heriot-Watt University lost to Aberdeen 2nds 24-21.

From Northern 1A, current Northern Conference Cup holders Manchester Met are on the hunt for silverware again as Rob Jones’s side beat Harper Adams University 15-12 away from home.

Midlands 1A side Oxford Brookes University put their tough domestic form behind them to progress into the last 32 after defeating the University of Plymouth 24-5. They will be joined by Nottingham Trent 2nds who beat the University of Surrey 29-17.

There were also wins for Essex, Leicester, Gloucestershire, Brunel, Brighton and Edinburgh 2nds.