Second half blitz helps Bath go to the summit 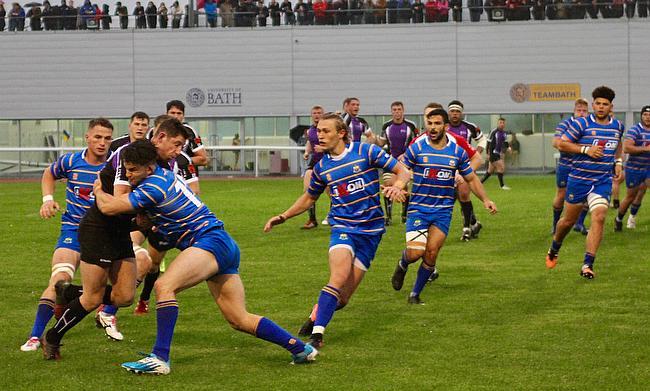 The University of Bath are one point clear at the top of BUCS Super Rugby after a ruthless second half performance against Nottingham Trent University.

Aaron James’s side have won four games on the spin and have edged in front of second placed Hartpury, who left it late to defeat Northumbria University.

Domestic champions, the University of Exeter, are on the coattails of the top two after holding off Cardiff University while Durham University and Cardiff Met secured wins over Loughborough University and Leeds Beckett University, respectively.

Below is the latest from BUCS Super Rugby plus we round-up some of the other University Rugby action.

The University of Bath have moved to the top of BUCS Super Rugby after securing a fourth consecutive win against Nottingham Trent University.

Bath crossed twice in the opening half and landed a penalty to lead 17-7 at Lady Day after Trent had opened the scoring for the afternoon.

The visitors then went through the gears after the break as they scored four unanswered tries and despite a late response from Trent, including Caetano Branco’s effort, Bath had done enough to go to the summit of BUCS Super Rugby.

Hartpury overcame a second-half fightback from Northumbria and scored a late penalty to secure their third win on the bounce.

Two quick-fire scores from Yaree Fantini after the interval looked to have put Northumbria on course for victory after Ervin Muric and Toby Venner had crossed for the champions.

FULL TIME | WHAT. A. FINISH! Despite Northumbria holding the lead for the majority of the second half it's Hartpury who claim the win 18-17!#BUCSSuperRugby #HARNOR pic.twitter.com/94yv4pG6Xo

But after trailing 17-15 with five minutes remaining, Nathan Chamberlain landed his second penalty of the evening and after surviving intense pressure from Northumbria, Hartpury snatched the win.

The result for Hartpury leaves them a point behind Bath.

Northumbria Head of Rugby Darren Fearn: “It’s never nice to lose a game, especially by a point. It is not the end of the world and we come away with a point.

“It was a good game of rugby! Good for the neutral, but we have got to get some stuff right and I am sure we will.

Man of the Match Nathan Chamberlain: “I do the same process and thankfully the kick went through. I was bit nervous it was going wide and the wind managed to take it in so I am pleased with the kick and the win for the lads.

“The lads played well. They stuck to it. There were a few errors from us in the first and second half, but we played really well against a strong, counter attacking team and thankfully we got the win.”

The University of Exeter held off a late charge by Cardiff University to secure a bonus-point win in Wales.

Tries from Josh Pieterse, Charlie Davies, Olly White and Matt Bursey put Exeter 28-15 up before a Matt Johnson score looked to have put the icing on the cake for the visitors.

The North-East side, who were humbled by champions Hartpury last week, led 24-7 at the break with Tom Lewis, Myles Rawston-Rudd (2) and Saul Melvin-Farr scoring tries.

And that’s the game! A very impressive performance from #DURFC to down @LboroRugby 32-19 in an entertaining affair. Several tries, big tackles and some running rugby made for a great occasion. Safe trip home @LboroRugby #DURLOU

Loughborough did hit back at the beginning of the second half, but a fifth try for Durham kept them firmly in control of this contest.

The visitors added another score to their tally, but Rawston-Rudd wrapped up the win for Durham with a penalty late on.

Three first half tries – one from Tom Benjamin – gave Danny Milton’s side a 22-7 interval lead, with Beckett managing a score of their own.

Harry Johnston kicked a penalty to extend Met’s advantage in the second period, but two converted tries for Leeds Beckett gave them belief.

Yet with the deficit now down to four points, Cardiff Met held their nerve and Luke Northmore’s excellent individual score was enough to seal the victory.

Newcastle University made it four wins on the spin in North A after comprehensively beating the University of Nottingham 41-19. The North-East side remain five points clear at the top of the division as Durham 4ths thrashed the University of Leeds 45-14 to pick up their third victory of the campaign.

Also in North A, the University of Edinburgh edged past Bishop Burton College with a 15-14 win and the University of Birmingham secured their maiden triumph of the term with a 43-13 victory over Loughborough 2nds.

Durham 3rds’ winning run in North B came to an end on Wednesday as they were beaten 39-22 by the University of Sheffield. The Yorkshire side are up to second in the table and they sit behind leaders the University of Glasgow who defeated fellow Scottish side the University of Sterling 61-31 to maintain their 100 per cent start to the season. Elsewhere, the University of Manchester narrowly lost 31-29 against Leeds Beckett 2nds.

39-22 final score means another bonus point win for the 1s. With the 3s registering yet another win that makes for a good day at the office. As Meatloaf once said, 2/3 ain’t bad ???? ??

Hartpury 2nds remain on top of South A after clinching a 13-3 victory over Swansea University. Second placed the University of South Wales sealed their third triumph in a row as they beat the University of Bristol 10-3 while Bath 2nds clinched a narrow 17-15 win over UWE and Exeter 2nds secured a 26-24 victory against Cardiff Met 2nds.

With South B leaders St Mary’s University not in action this week, Exeter 3rds moved to within a point of the table toppers following a 62-14 win over the University of Portsmouth. Meanwhile, Hartpury 3rds beat Reading University 38-25.

The University of Aberdeen have moved to the top of Scottish 1A after beating early title rivals the University of St Andrews 24-14 away from home. There wasn’t the same success for Aberdeen’s 2nds as they lost 59-7 against Heriot-Watt University.

Newcastle 2nds and Manchester Met remain neck and neck at the summit of Northern 1A after three matches played. On Wednesday, Newcastle defeated Durham 4ths 29-10 while Man Met thrashed Newcastle 3rds 41-0 and the top two face each other next week in this division. Also, the University of Liverpool thumped the University of Hull 40-14 at Wyncote Sports Ground.

After a battle at the summit of Northern 2A, Keele University remain unbeaten after a narrow 17-14 win over Sheffield Hallam University while Liverpool 2nds picked up their first victory of the season following a 20-7 triumph against Manchester 2nds.

In Northern 2B, Northumbria 3rds continued their winning streak as they secured a 41-39 victory over Leeds Beckett 3rds after scoring seven tries. The University of York also remain undefeated as they thrashed Leeds Beckett 4ths 45-10 while Leeds 2nds comfortably beat Sheffield 2nds 31-0 in the Steel City.

Liverpool John Moores University made it four wins from four as they comfortably beat Liverpool 3rds 47-0, but the University of Chester are hot on their heels after securing a 19-12 win over Bangor University. Meanwhile, Man Met 2nds continued their excellent start to life in Northern 3A with a 36-30 win against Edge Hill University.

Northern 3B leaders York St John University also maintained their perfect start to the season as the they beat Newcastle 4ths 34-24 while Sheffield Hallam 2nds defeated the University of Huddersfield 31-22.

In Midland 1A, Loughborough 3rds made it two wins on the spin after thrashing Nottingham Trent 2nds 49-0 and Oxford Brookes University stunned Harper Adams University with a 29-24 win.

In Midlands 2A, the University of East Anglia continued their impressive start to the campaign with a 24-10 win over Warwick 2nds while Nottingham Trent 3rds defeated Birmingham 3rds 42-19.