Who sits at the top of the all-time Six Nations table? 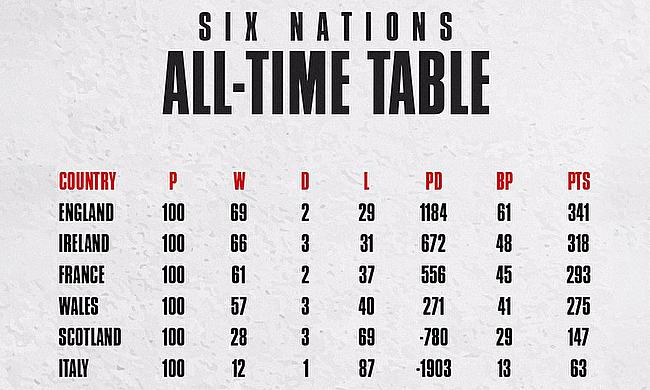 Since the competitions conception, we look back at 20 years of the Six Nations and who comes out on top.

Four different countries have lifted the Six Nations trophy in the last 20 years since the 5 sides became 6.

With the help of Betway's research we can look at over the 100 matches, and announce who can boast the ultimate bragging rights.

To find this out we have teamed up with Betway Rugby to compile the all-time Six Nations table.

This includes the retrospective application of the points system that was introduced in 2017, whereby teams earn 4 points for a win and 2 for a draw, and a bonus point for either scoring 4or more tries or losing by 7 points or fewer.

To avoid the possibility of a team winning all 5 of their matches in a single year but still missing out on the title, 3 bonus points are awarded to any side that achieves a Grand Slam.

The answer to the above, when all factored in, it is England who have won more matches and titles than anyone else, whilst scoring the most points and tries in the process.

The 36 bonus points, 19 losing bonus points and 2 Grand Slams have boasted their points by 61, amassing the most collective points throughout the Six Nations timeline.

England's home record is an impressive one, being the most dominant with 42 of their 50 matches or 84% at Twickenham.

Ireland who sit in second have the best record on the road, winning 28 of their 50 away matches or 56%.

France take third with their 3 Grand slams and 5 titles, with the last time being 2010 where they were undefeated throughout the whole competiton.

Wales are down in fourth, despite having 5 titles to their name (the same as France, 1 more than Ireland) and 4 of those 5 being Grand Slams.

Scotland are further down still in fifth, picking up 16 more bonus points and 16 more wins than Italy.

Italy are firmly at the bottom winning just 12 of their 100 matches since joining the competition, although they have beaten every other team, except for England.

The Azzuri have received 14 wooden spoons in 20 years, and they've conceded almost 1,000 more points than any other side.

So there you have it, makes for interesting reading as we enter Round 2 of the 2020 competition.