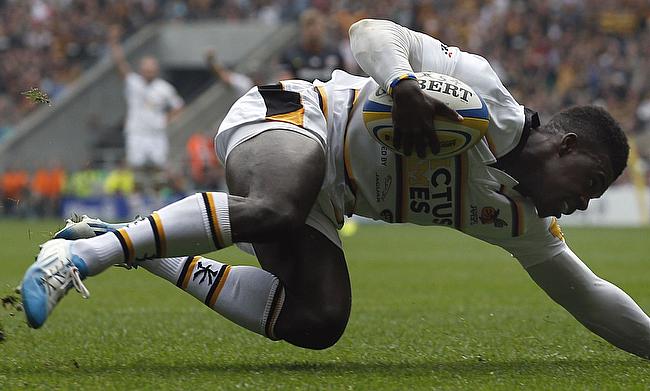 Christian Wade has admitted he would not know which way to turn if both England boss Eddie Jones and Team GB Sevens coach Simon Amor request his services this summer.

The in-form Wasps winger brands himself the "underdog" when it comes to assessing his chances of forcing his way on to England's three-Test tour of Australia in June.

The 24-year-old would dearly love to add to his one Test cap, but also conceded chasing the Olympic dream in Rio with Team GB would represent the chance of a lifetime.

Wade grabbed an Aviva Premiership record-equalling six tries in Wasps' 54-35 victory at Worcester on Saturday, but no one has yet contacted the Coventry club requesting any of their players be made available for August's Rio Olympics.

"It's a difficult one, I'll have to wait and see what happens," said Wade, when asked which he would choose if in demand for both the Olympics and England's Australia tour.

"I've only played one Test so I'm not really sure. We'll have to see.

"That's quite a tough question. In the press I think there's been one person who's spoken to Eddie (Jones) and he's said they can go (to the Olympics) with his blessing. If that scenario comes around we'll have to discuss it.

"The decision's not going to be in my hands so it makes it easier for me to concentrate on Wasps.

"It will probably be harder for the other guys in the EPS (elite player squad) who have places to keep. In reality I'm the underdog.

"All I need to do is focus on my game, do what I can do and let's see what happens."

Wade will aim to be as much a thorn for Saracens in Saturday's European Champions Cup semi-final in Reading as he was at Worcester last weekend.

"It really hit me quite hard, not being involved in a 50-man squad," said Wade.

"It made me rethink where I was at as a player - when you've got six wingers being picked for the World Cup and I'm not involved at all.

"I had to do a lot of thinking and had to refocus to get ready for the year ahead.

"It's made me want to work even harder than I have so far, keep working on my game.

"There's been a couple of times in the last couple of years where I've had a few lows and my confidence dipped.

"I thought, 'Am I good enough to do this?' and things like that. Or just lose the confidence in games to try and beat men and use my speed and stuff.

"There definitely have been times in the last couple of years where those thoughts have crossed my mind. It has been pretty tough.

"But I got through with the support of my team-mates. Dai Young's obviously helped me a lot as well. I spoke to him a couple of times.

"Having my family and my close friends around me as well to just try to take my mind off rugby sometimes. Just having that encouragement from people helped me through that."

While Saracens wing Chris Ashton celebrates his tries with the 'Ash Splash' swan dive, Wade joked he might take on a more American approach to toasting his scores with one of the recent dance crazes from the United States.

When quizzed on whether his free-scoring would lead him to rethink his celebration technique, Wade joked: "I might have to do a little dab...give him a little nae nae or something."