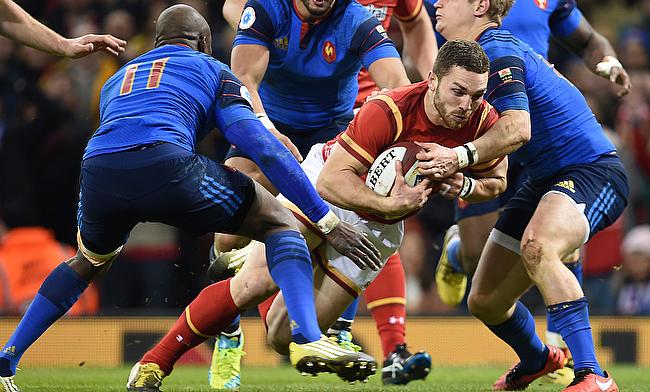 Wales moved top of the RBS 6 Nations Championship after recording a fifth successive victory over France to set up a potential title showdown with England in two weeks' time.

England will reclaim pole position if they beat Ireland on Saturday, but Wales are also firmly in the mix for Six Nations silverware after wing George North's second-half breakaway try underpinned an unspectacular 19-10 success.

Fly-half Dan Biggar converted North's touchdown and kicked four penalties for a 14-point haul, while his opposite number Jules Plisson replied with a penalty before Les Bleus skipper Guilhem Guirado claimed an 80th-minute try that Francois Trinh-Duc converted as Wales prevailed at the Principality Stadium.

North's 46th-minute score - his 25th Wales try - calmed the home team's nerves after their first-half territorial supremacy was not backed up by points during a game that will not live long in the memory.

Ultimately, it was a case of job done, with Wales' defence again proving world class as France were repelled during a lengthy period of second-half pressure, before Guirado pounced. In the last six Tests between the countries, Les Bleus have scored just two tries.

With their unbeaten Six Nations record ended this season, France's title aspirations also look over, but Wales remain masters of their own destiny and they will head to Twickenham on March 12, five months after a 28-25 victory there contributed hugely to England's painful World Cup demise.

Wales showed three changes from the side that claimed an eighth successive victory over Scotland earlier this month, with starts for wing Alex Cuthbert, lock Bradley Davies - who replaced an injured Luke Charteris - and flanker Dan Lydiate, with skipper Sam Warburton switching to his more familiar openside flanker role after two appearances in the number six shirt.

Biggar should have put Wales ahead after nine minutes, but he sent an angled penalty chance wide of the target, and then Plisson followed suit from longer range after prop Rob Evans was penalised for collapsing a scrum.

The home side went ahead through a Biggar penalty early in the second quarter when France lock Paul Jedrasiak appeared to take out Wales number eight Taulupe Faletau off the ball, but referee Wayne Barnes decided on no further action.

France's attacking game was restricted in so many ways, and Wales just had to be patient as they strung together several threatening passages of play, utilising centre Jonathan Davies' powerful midfield running and full-back Liam Williams' aerial excellence.

A second Biggar penalty doubled Wales' lead, yet France quickly halved the deficit through a Plisson short-range strike after Barnes made use of big screen plays before ruling an illegal tackle by Lydiate.

Les Bleus flanker Antoine Burban briefly left the field for a head injury assessment after being flattened following a Warburton charge, and Wales ended the half camped close to France's line following an electrifying Gareth Davies break that set up a series of attacking scrums.

But France survived intense pressure, and they trooped off just three points adrift after their opponents had struggled to convert pressure into points.

Biggar put Wales 9-3 ahead just three minutes into the second period following a dangerous Jonathan Danty tackle on Cuthbert, although once again the home side will feel they might have had more of a scoring return, but were guilty of taking poor options and making one pass too many.

The opening try, though, finally arrived when a French attack broke down in midfield, Jonathan Davies kicked cleverly into space and a sprinting North, who initially miskicked with his right foot when he attempted to tap the ball over the line, still had time to gather and touch down.

Biggar added the conversion to open up a 13-point advantage, but just when there appeared no way back for France, they established prolonged pressure through their forwards that tested Wales' defence and ensured they retained a fighting chance.

For long enough, the Wales defence - as it had done on several recent occasions against France - held firm, and danger was averted entering the final quarter.

The game sealed - despite the late Guirado try - Wales now move on to Twickenham and a clash against their fiercest rivals that will not be for the faint-hearted.